TORONTO — Travis Lulay is living proof of just how important a backup quarterback is in the CFL. The 33-year-old threw for a career-best 436 yards and three TDs Saturday night in leading B.C. past the Hamilton Tiger-Cats 41-26.
0
Jul 19, 2017 1:12 PM By: Canadian Press 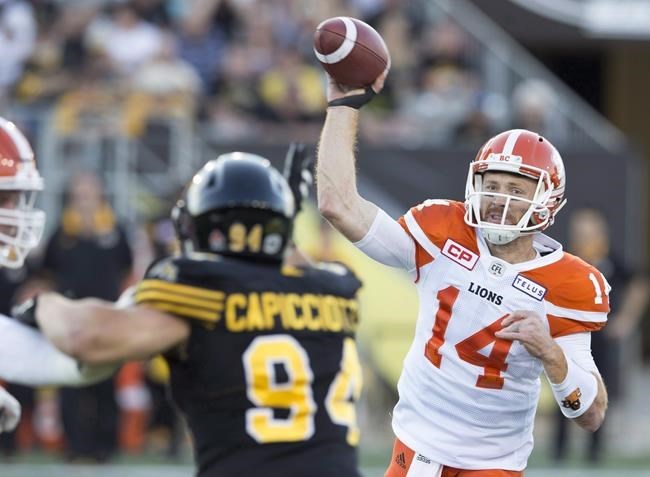 TORONTO — Travis Lulay is living proof of just how important a backup quarterback is in the CFL.

The 33-year-old threw for a career-best 436 yards and three TDs Saturday night in leading B.C. past the Hamilton Tiger-Cats 41-26. Lulay set a CFL record for most passing yards coming off the bench, replacing injured starter Jonathon Jennings on the Lions' first possession.

"I'd be lying if I said it wasn't a special moment for me to be able to come off the bench and help my team win," Lulay said. "Being a (backup) you never know when or how it's going to happen.

"Last year it didn't happen, this year it happened on the second play of the game in a game on the road that my team needed me in. The first two plays I got hit really good, that kind of jarred my senses into the game."

In January 2013, Lulay signed a two-year contract extension reportedly worth $450,000 annually. But he suffered a shoulder injury that season that required surgery and limited him to just four games — and one start — in 2014.

Lulay started 10 games in 2015 before suffering a torn medial collateral ligament. Jennings stepped so impressively as a rookie that when Lulay returned, it was as the backup. To remain with B.C., Lulay had to not only swallow his pride but also take a significant pay cut.

Lulay led B.C. (3-1) to a third straight road win against an East Division opponent. He relished teaming up with receiver Nick Moore, who re-signed with the Lions in February after missing much of last year with a torn ACL suffered while celebrating a touchdown.

"An ACL on a receiver is like a throwing shoulder on a quarterback so I know what he went through," Lulay said. "I was really pulling (for Moore), I've always been a really big Nick Moore fan.

"He's a very smart football player, he reminds me a lot of (former Lions star receiver Geroy Simon) in that sense.  It was really fun to be on the field with Nick."

"The fade I threw him, the back-shoulder ball for a TD, we threw the same exact ball on a two-point conversion the first week in 2013 against Calgary," Lulay said. "I said, 'You remember the last time we threw this fade ball? Let's throw one.'

"So we threw one in warmup. Little did we know we'd be throwing that in a game an hour or two later."

The defending Grey Cup champions are 0-3-1 this year, the losses being by a combined six points. Ottawa dropped a 23-21 decision in Edmonton on Friday night, missing a two-point convert with under a minute remaining that would've tied the game.

The Redblacks don't have time to worry about it. On Wednesday night, they'll host a Montreal Alouettes squad that earned a solid 30-23 home win over the Calgary Stampeders on Friday night.

And then Ottawa will head to Toronto on Monday night for its third game in 11 days and face an opponent that will have had 11 days off. Then again, after playing the Redblacks, the Argonauts visit the Saskatchewan Roughriders five nights later.

CFLPA PARTNERSHIP: The CFL Players' Association agreed Monday to a partnership with Enriched Academy, a financial education and awareness company.

The deal will provide CFL players with assistance in managing their finances while offering career guidance.

"Enriched Academy is an innovative company working with more than 10,000 clients and many major businesses and institutions to provide financial education that lasts a lifetime," said CFLPA president Jeff Keeping.

"This initiative starts by empowering the players and their families with the financial knowledge and resources they need," said Enriched Academy CEO Todd Peterson. "But with this partnership, the CFLPA and its players will be helping to inspire and engage many other Canadians right around our country."

THIS 'N THAT: Montreal's home win over Calgary snapped the Stampeders' 19-game regular-season unbeaten streak and handed starter Bo Levi Mitchell, the CFL's outstanding player last year, just his eighth career regular-season loss (45-8-2). The Alouettes have won their last four home dates versus the Stamps while veteran slotback Nik Lewis — a former Stampeder — moved into sixth in all-time receiving yards . . . Ricky Ray, the CFL passing leader with 1,529 yards, has thrown for over 300 yards in all four of Toronto's games . . . Toronto's Martese Jackson accumulated 339 yards on 11 kick returns (five punts, six kickoffs) and a TD in a 33-25 road loss to Winnipeg on Thursday. He also had a 105-yard kickoff return touchdown negated by penalty . . . Edmonton's Adarius Bowman was the CFL's leading receiver last year but Brandon Zylstra (21 catches, 296 yards) is the club's top receiver this season . . . Hamilton receiver Jalen Saunders had five catches for 147 yards and a TD versus B.C.

Note to readers: This is a corrected story. An earlier version reported that Todd Peterson was president of the Enriched Academy.

Canada's Larry Walker elected to Baseball Hall of Fame in Cooperstown
Jan 21, 2020 11:48 PM
Comments
We welcome your feedback and encourage you to share your thoughts on this story. We ask that you be respectful of others and their points of view, refrain from personal attacks and stay on topic. To learn about our commenting policies and how we moderate, please read our Community Guidelines.