YEREVAN, Armenia — Robert Lewandowski scored a hat trick to become Poland's all-time highest scorer and put his team on the verge of qualifying for the World Cup after beating Armenia 6-1 on Thursday.
Oct 5, 2017 4:54 PM By: Canadian Press 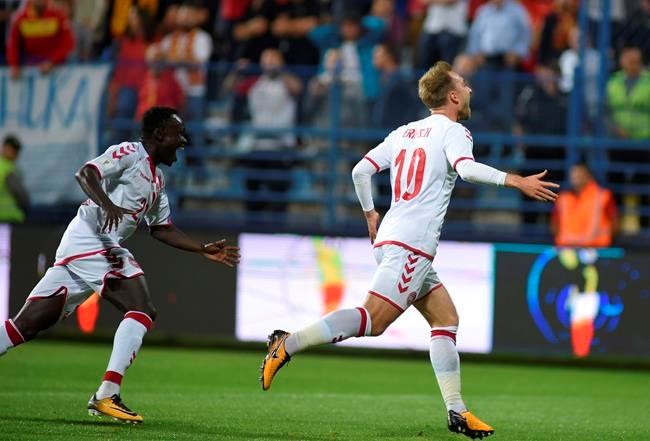 YEREVAN, Armenia — Robert Lewandowski scored a hat trick to become Poland's all-time highest scorer and put his team on the verge of qualifying for the World Cup after beating Armenia 6-1 on Thursday.

After Denmark won at Montenegro 1-0, Poland leads Europe Group E by three points over Denmark, and needs a point from the last-round match on Sunday against Montenegro in Warsaw to automatically qualify as the group winner.

Montenegro is third, six points behind.

With his third hat trick in the campaign, Lewandowski became the most prolific scorer in this European qualifying with 15, one ahead of Cristiano Ronaldo.

Before Lewandowski struck, Kamil Grosicki needed only two minutes to fire Poland ahead with a clinical finish after Lukasz Piszczek set him up at Republican Stadium.

Lewandowski curled in a free kick over the defensive wall from some 20 for his first goal of the night and 48th in internationals, tying Wlodzimierz Lubanski as Poland's all-time leading scorer.

Another tap in gave Lewandowski his hat trick in the 64th, and 50th international goal.

Hovhannes Hambardzumyan headed home for Armenia six minutes before halftime to reduce the lead to 3-1.

Christian Eriksen scored from the edge of the area 16 minutes into the game, a precious goal for Denmark to keep alive hope of automatic qualifying.

It was the seventh goal for the midfielder in qualifying.

Denmark, which handed Poland its only defeat in the group stage by 4-0, hosts Romania in the last round and must win to win the group.

Constantin Budescu scored twice in five minutes late in the first half to lead Romania over Kazakhstan 3-0 and cement its fourth-place finish in the group.

Substitute Claudiu Keseru added the third goal in the second half and Bauyrzhan Turysbek scored the lone goal for Kazakhstan.

Armenia is six points behind Romania in fifth, and Kazakhstan has two points at the bottom.