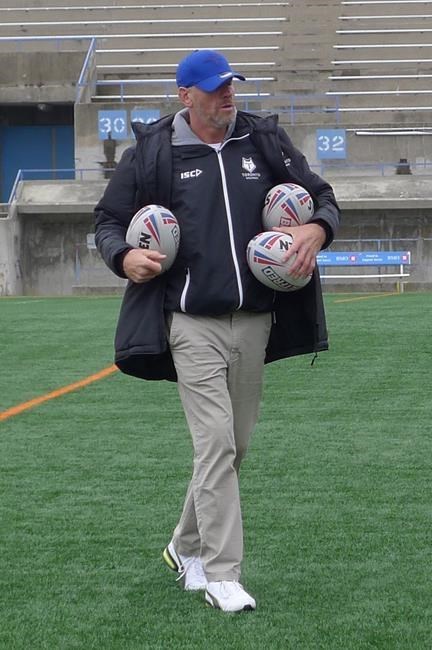 Two players from each side were sent to the sin-bin during the ill-tempered match, the regular-season finale for both clubs. The Lamport Stadium contest featured several melees and a string of questionable tackles.

"I'm having blokes with nearly broken jaws and blokes being taken off the ball and people getting hit late and people grabbing at other men's testicles and people gouging throughout the whole game," McDermott said.

"He (McDermott) seems like he has spat out his dummy because we were aggressive with them," Duffy told the Leigh Journal. "The words he has chosen are not true. They showed their class and what they are about and won the game. So I don't see why he has to come out with rubbish like that.

"To use 'bully' is a strong word and they need to look closer to home. I don't know why he used that sort of term towards this club. Only a couple of teams have had a dig over there, every other has sat back. We just went over there to have a dig. It baffles me sometimes when I hear stuff like that."

McDermott has complained for weeks that opposing teams are trying to bait his players to get them off the field.

Toronto and Leigh have history.

Paul Rowley, Toronto's first coach, used to play and coach at Leigh and recruited heavily from the Centurions. Most of those players have since moved on.

Ryan Brierley and Jake Emmitt, the two Leigh players yellow-carded on the weekend, both played at Toronto.

Toronto (26-1-0) and Leigh (18-9-0) have both made the five-team promotion playoffs, looking to win their way into the top-tier Super League.

The Wolfpack have a bye to the semifinals after finishing atop the Betfred Championship regular-season standings.

The Toulouse-York winner will visit Toronto on Sept. 22 in one semifinal while the loser plays the Leigh-Featherstone winner in the other.

A Toronto semifinal win will see the Wolfpack host the Oct. 5 Grand Final with a place in the Super League up for grabs. If Toronto loses the semifinal, it will have one more chance to make the promotion final.

Toronto also topped the Betfred Championship standings last season but fell at the last promotion hurdle, losing 4-2 to London Broncos in the Million Pound Game. The Wolfpack won promotion out of the third-tier League 1 in their inaugural 2017 season.

Romo remains with CBS after agreeing to long-term contract
Feb 29, 2020 2:44 AM
Friday's Games
Feb 29, 2020 1:52 AM
Canada's Fernandez makes Mexican Open final with 6-3, 6-3 semi win over Zarazua
Feb 29, 2020 1:24 AM
Comments
We welcome your feedback and encourage you to share your thoughts on this story. We ask that you be respectful of others and their points of view, refrain from personal attacks and stay on topic. To learn about our commenting policies and how we moderate, please read our Community Guidelines.