BUFFALO, N.Y. — After spending much of the past two weeks talking about playing a complete game, Jack Eichel and the Buffalo Sabres finally came out and proved they could put their words into action.
Nov 24, 2017 11:16 PM By: Canadian Press 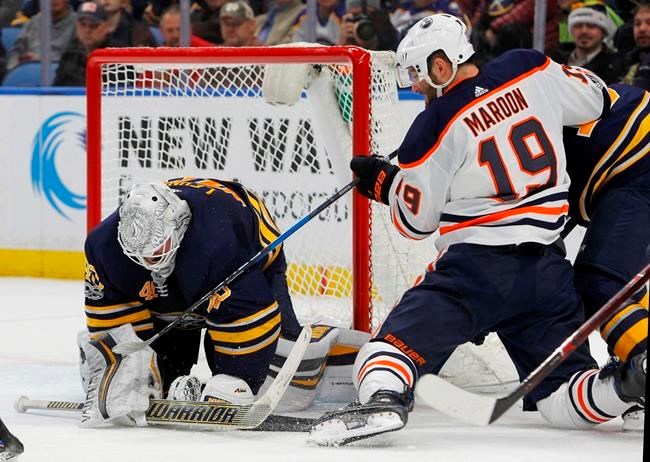 BUFFALO, N.Y. — After spending much of the past two weeks talking about playing a complete game, Jack Eichel and the Buffalo Sabres finally came out and proved they could put their words into action.

Eichel scored what proved to be game-winning goal in the opening minute of the third period, Robin Lehner stopped 29 shots and the Sabres snapped an 0-5-2 skid with a 3-1 win over the Edmonton Oilers on Friday night.

"Seeing the way we could play tonight, I think more than anything it should be a bit of a boost to everyone in the room, a little confidence," Eichel said. "When we play the right way, when we do things, it's rewarding."

Jacob Josefson scored the opening goal and Kyle Okposo sealed the victory with an empty-netter in a game where the Sabres outshot the Oilers 24-15 through two periods. The only blemish came with 20 seconds left, when Yohann Auvitu snapped a shot inside the left post to end Lehner's shutout bid.

Buffalo bounced back from various meltdowns and slow starts to win its first game since a 3-1 victory over Washington on Nov. 7.

"I thought it was a great response," coach Phil Housley said. "This team's been through a lot in the short past here. There's been a lot of challenges and a lot of conversations. It was time to put things into action."

The Oilers' inconsistencies continued by failing to build off a 6-2 win at Detroit on Wednesday. Edmonton (8-13-2) dropped to 1-4 in its past five and has won consecutive games just once this season.

"I don't think it was effort at all," Oilers captain Connor McDavid said. "We were just sloppy. It just felt like we were never really in sync, anyone at any time."

The Oilers managed just four shots through the first period. They went 0 for 3 on the power play, taking just four shots. Only after Eichel scored on a weak shot from just inside the blue line 43 seconds into the third period did Edmonton finally generate some chances, outshooting the Sabres 15-3 over the final 19 minutes.

Lehner was particularly sharp with 14 minutes left when he made a lunging glove save to foil Matt Manning's one-timer from the right circle.

Josefson opened the scoring with 5:44 left in the second period. He started the play by out-working an Oilers defender in the left corner, before dropping the puck to Okposo. Josefson then headed to the right circle, where he one-timed Okposo's pass over Laurent Brossoit's left shoulder.

Brossoit then muffed what should have been an easy shot from Eichel, who beat him on the short side from 40 feet. The backup stopped 28 shots in place of Cam Talbot, who was experiencing flu-like symptoms.

NOTES: The Sabres told The Associated Press that no one was hurt when a lightweight, padded sound muffler fell from the ceiling into the third level stands of KeyBank Center late in the third period. ... Sabres D Rasmus Ristolainen had an assist in his first game back after missing nine with an upper body injury. ... Oilers D Oscar Klefbom (flu) did not play. ... Sabres LW Evander Kane had a goal disallowed 8 minutes into the second period when he took three whacks at the puck to finally jam it inside the right post. The puck, however, crossed the line after referee Ghislain Hebert blew the play dead. ... Buffalo snapped a four-game home skid. ... McDavid was held without a point for only the sixth time this season.

Sabres: At Montreal on Saturday.