NEWARK, N.J. — Patrik Laine extended his point-scoring streak to 10 games for the Winnipeg Jets in another victory. Meanwhile, Taylor Hall saw his run end at 19 for the New Jersey Devils. Therein lies one tale in the Jets' 3-2 win Thursday night.
Mar 8, 2018 11:46 PM By: Canadian Press 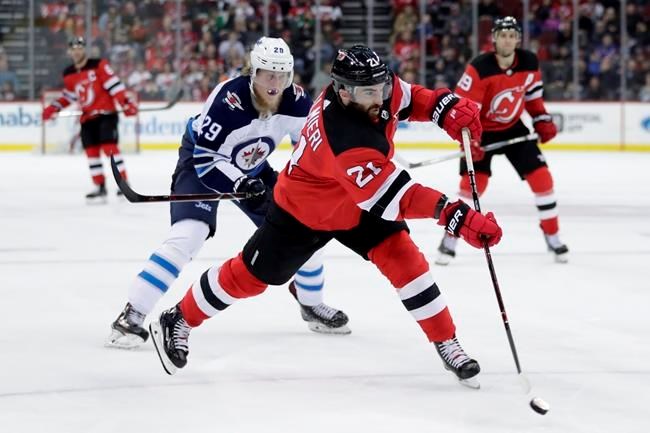 NEWARK, N.J. — Patrik Laine extended his point-scoring streak to 10 games for the Winnipeg Jets in another victory. Meanwhile, Taylor Hall saw his run end at 19 for the New Jersey Devils.

Therein lies one tale in the Jets' 3-2 win Thursday night.

Winnipeg's top gun struck again with his eighth goal in the last four games. Laine has 14 goals and six assists over the 10-game span. He has 39 goals, pulling within one of Alex Ovechkin for the league lead.

"Maybe it's just that I'm a year older," said Laine, who is still only 19. "I know a little bit more about the game and I'm a better player than last year. When you're confident and feeling good about your game, you try to shoot it and it doesn't matter if you are in a great spot. Just get it to the net, and it might go in."

The other tale of the Jets' triumph came at the other end of the ice, where Connor Hellebuyck made 41 saves against the persistent Devils as the Jets extended their winning streak to four.

It was a milestone victory for Hellebuyck, his 35th to set the franchise single-season record. Kari Lehtonen held the old mark of 34 for the Atlanta Thrashers in 2006-07.

"I haven't let it soak in," Hellebuyck said. "It's a good feeling, having my name up there is pretty cool. It's a big milestone in my career and I'm going to enjoy it and continue on and keep pushing the pace."

The Jets show no sign of slacking their pace.

Joel Armia and Nikolaj Ehlers also scored as the Jets posted their ninth win in the last 11 games. It also extended the Jets' streak to 7-0-1 in their last eight road games.

Kyle Palmieri and Nico Hischier scored for the Devils, who lost for the fourth time in five games. They came up a goal short on the night Hall failed to hit the score sheet.

"It was going to end sometime," said Hall. "You want it to be on a night when you had some chances and created some . I thought I did that pretty well. You try to start a new one and you always want to be honest with your evaluation of yourself. Tonight was a night where you probably deserve a couple of points. There were some nights on the streak where I didn't play well at all and maybe found a way to get a couple of points. That's the way it goes."

The 19 games was the longest consecutive streak in the league this season. Hall had also earned points in 26 consecutive appearances dating to Jan. 2. He missed three games before the All-Star break with a thumb injury.

Hellebuyck took pride in being the one to end the streak.

"Absolutely, he's a good talented player," said Hellebuyck. "It had to happen sooner or later and I'm glad I was the one."

Cory Schneider stopped 21 as he lost his 10th straight decision. New Jersey got goals from Kyle Palmieri and Nico Hischier.

Laine scored the only goal in the wide-open first period. Unchecked in the slot, he drilled the puck past Schneider at 4:12 for his 39th of the season.

There was plenty of action at both ends with Blake Coleman having the best chance to even the score for the Devils. Coleman broke in alone only to lift a backhander over the net with five minutes remaining.

Down in the New Jersey end, Winnipeg came very close to a 2-0 lead when a deflected shot squeezed by Schneider who dived backward to swat it away inches before it crossed the goal line.

In the second, Winnipeg went up 2-0 at 13:26 when Armia beat Schneider with a wrist shot from the high slot.

Palmieri, sprung by a long lead pass from Nico Hischier, countered for New Jersey with a breakaway goal, ripping a shot over Hellebuyck's glove at 16:41 to cut the deficit to one.

New Jersey came out flying to start the third, outshooting Winnipeg 10-1 in the first five minutes, but Hellebuyck would not yield.

The next goal went to Winnipeg as Dustin Byfuglien fired a shot off the post and Ehlers buried the rebound at 9:55.

New Jersey fought back again to cut the deficit to 3-2 as puck deflected into the net off Hischier at 11:07.

That's where it ended, with Hellebuyck stopping 17 shots over the final 20 minutes.

"He's a big goalie," Palmieri said of Hellebuyck. "I think that helps when you have to fight to see pucks through traffic. It's tough. We threw a lot at him. We got in front of him. We got the second chances. Some nights it just doesn't bounce your way."

NOTES: Jets C Mark Scheifele missed the game with an upper-body injury. He is day to day. ... Devils LW Brian Gibbons returned to the lineup for the first time since breaking his thumb on Jan. 20. He replaced C Pavel Zacha, who was out with an upper-body injury. ... This was the third game of a season-high six-game road trip for Winnipeg. The Jets have upcoming stops in Philadelphia, Washington and Nashville. .... The Devils will embark on a similar journey. They are on the road for the next six, a trip that includes visits to all three California teams and Las Vegas. New Jersey's next home game is March 24 vs. Tampa Bay. ... With G Steve Mason out with a lower-body injury, the Jets recalled Michael Hutchinson from the Manitoba Moose. Hutchinson's flight was delayed, so Winnipeg signed Zane Kalemba, a 32-year-old from Saddle Brook, New Jersey, to a try-out contract as an emergency backup to Hellebuyck. Hutchinson arrived for the second period. ... Devils C Travis Zajac did not return after absorbing a big hit from Andrew Coop in the second period. New Jersey coach John Hynes said he did not have an update on Zajac.

Jets: At Philadelphia on Saturday.

Devils: At Nashville on Saturday night.