SAN JOSE, Calif. — Less than two months removed from a stint in the minors, Kevin Labanc is getting ice time on San Jose's top line and power play. Showing he belongs, too.
0
Dec 22, 2017 3:37 AM By: Canadian Press 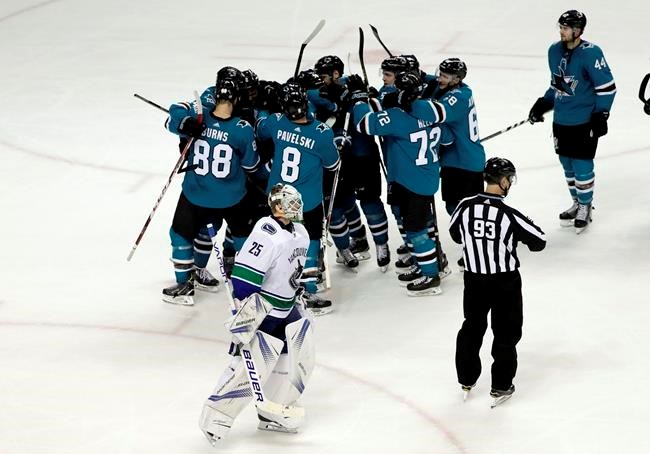 SAN JOSE, Calif. — Less than two months removed from a stint in the minors, Kevin Labanc is getting ice time on San Jose's top line and power play.

Showing he belongs, too.

Labanc scored 1:53 into overtime and had three assists as the Sharks beat the Vancouver Canucks 5-4 on Thursday night.

Joe Thornton scored twice for San Jose and added an assist as he moved past Doug Gilmour for 18th place on the NHL list with 1,416 career points.

Labanc's fourth goal of the season came off an assist from Tomas Hertl, and the Sharks improved to 4-1-2 over their last seven games.

"You've got to experience the downs and then learn how to get out of them, keep a good head on your shoulders and keep working," Labanc said.

The Canucks are 1-6-1 in their last eight games, with the lone win during that span coming against San Jose on Dec. 15.

Vancouver trailed 4-3 before Daniel Sedin scored at 2:09 of the third period to tie it. The Canucks rallied from a 3-1 deficit.

Jake Virtanen scored to bring Vancouver within a goal at 8:49 of the second, and Brock Boeser tied the game at 16:02.

Boeser's goal was his 19th of the season and eighth in 11 games.

"A point's big, but we definitely feel we could've won that game," Boeser said. "Obviously, we need to clean up some special teams there."

San Jose trailed 1-0 before Thornton tied Gilmour with a goal at 11:52 of the first period. The Sharks took a 2-1 lead at 5:20 of the second when Timo Meier scored his fifth goal.

"I think we found a way to win," Sharks coach Peter DeBoer said. "It wasn't a perfect game. There were a lot of good areas. Our special teams were really good, but obviously we don't like getting into shootouts like that and giving up four goals. But it's that time of year and you're dealing with some injuries.

"There's no style points. We got two points in an important game and that's what mattered."

Brendan Gaunce scored the game's first goal at 1:58 of the first period on a play Virtanen started with a backhand pass to trailer Erik Gudbranson. He fired a shot that Gaunce redirected for his first goal of the season.

Late in the first period, Michael De Zotto saved a goal when he cleared a puck that got past goalie Jacob Markstrom inches from the net.

The Sharks dominated on special teams, scoring on three of five power plays while blanking Vancouver on four tries.

"I loved the way we played tonight, minus our penalty killing," Canucks coach Travis Green said.

"You score four goals on the road, you come back a couple of times, that's the kind of game we want to play. If we play that way every night we're going to be fine."

NOTES: Canucks D Ben Hutton was a healthy scratch. RW Nikolay Goldobin, a former Shark, also was scratched. ... Sharks D Paul Martin had a setback in his recovery from ankle surgery. The injury isn't a recurrence of the same injury. Martin has been on injured reserve since Oct. 12. There is no timetable for his return. ... C Logan Couture, out with a concussion he suffered against the Canucks last week, missed his second game. ... The Sharks recalled forwards Marcus Sorenson and Danny O'Regan from the AHL.