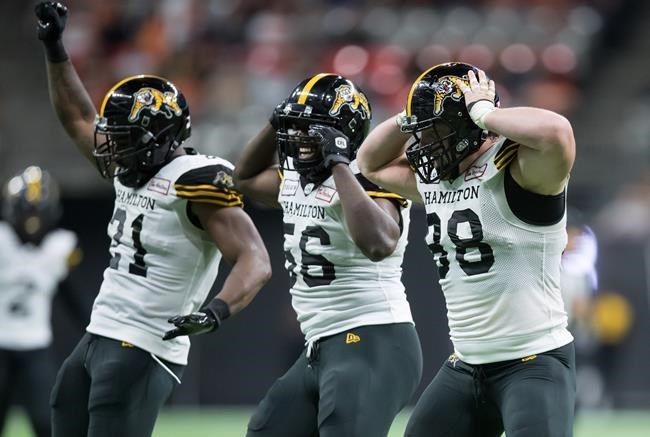 "It seems like you just can't catch a break when you keep getting punched and getting down," he said Saturday after the Lions dropped a 13-10 decision to the Hamilton Tiger-Cats.

"At the end of the line, the guys fought and put up a valiant effort. But we've still got to play better, no matter what the effort is."

Despite the final score, the Lions (1-9) put up a gritty defensive performance, keeping the East Division-leading Ticats (8-2) off the scoreboard for much of the first half.

B.C. had more offensive yards (393), more possession time (34:26) and more first downs (22) than the Ticats but ultimately struggled to get across the goal line — an issue that's plagued the team all season.

"We just couldn't finish in the red zone. They got seven when it mattered and we couldn't get seven until it was a little bit too late," said Lions receiver Bryan Burnham, who caught a three-yard pass in the endzone for a touchdown with just 30 seconds left on the clock.

"We make big plays and we look good on paper, but at the end of the day, we only scored 10 points so we've got to get the ball in the endzone."

Once again, the Lions also struggled to protect quarterback Mike Reilly, who was sacked seven times on Saturday.

Reilly still managed to throw for 286 yards and a touchdown on Saturday. He also reached a new milestone, hitting 30,062 passing yards in his CFL career.

But two of his attempts ended in costly interceptions in the red zone.

"It's frustrating knowing there was a couple of plays where it feels like that we left out there, where we had opportunities maybe down the field," Reilly said. "But it's not just those plays, there's other plays. It's just we're not consistent as a team, as an offence."

Ticats coach Orlondo Steinauer was impressed with the way his defence performed, especially considering that starting defensive end Adrian Tracy went down with an upper body injury in warmups.

"I think everyone was really prepared. But game plans are only as good as execution. And I felt like our guys executed, for the most part, really well," the coach said.

"I'll take what most people would classify as an ugly win over a pretty loss."

David Watford scored the Ticats' lone TD of the game midway through the third quarter, smuggling the ball through a crowd on the goal line for a one-yard touchdown.

Kicker Lirim Hajrullahu rounded out the scoring with a pair of field goals after missing a 40-yard attempt in the first quarter.

Sergio Castillo made a 45-yard field goal for the Lions but later sailed a kick wide on a 47-yard attempt.

Both teams now get a bit of a break. Hamilton will be back in action on Monday, Sept. 2, hosting the Toronto Argonauts in a Labour Day classic.

The Lions have a bye week before visiting the Montreal Alouettes on Sept. 6.

Changes could be made during the time off, Claybrooks said.

"We're going to assess everything over the bye. There's going to be no stone left un-turned," he said.

NOTES: Lions running back John White left the game in the first quarter with an apparent ankle injury. He received treatment on the sidelines but did not return to the field. ... The last time the Lions started the season 1-9 was 1969. ... B.C. honoured former Lions Darren Flutie and Geroy Simon at half time on Saturday, inducting the pair into the club's hall of fame.

Flames start road trip with 4-2 win over Red Wings
Feb 24, 2020 12:58 AM
Manitoba's Kerri Einarson wins Canadian women's curling championship
Feb 23, 2020 11:37 PM
Comments
We welcome your feedback and encourage you to share your thoughts on this story. We ask that you be respectful of others and their points of view, refrain from personal attacks and stay on topic. To learn about our commenting policies and how we moderate, please read our Community Guidelines.