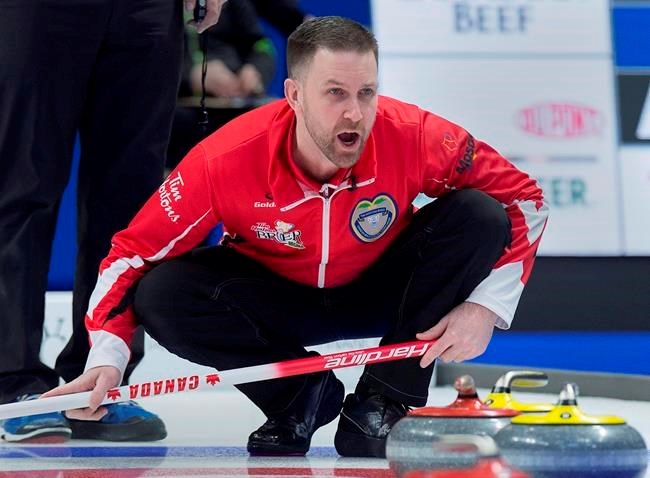 Under the new format introduced this year, the top eight teams with the best records after the first five days of the Tim Hortons Brier carried those records into the championship round.

The top four from that group advance to the playoffs and all but one of those berths were secured by Thursday night.

"We want nothing more than to win this thing once again," Jacobs said. "That's really the main motivation for our team, winning the Canadian men's championship for a second time."

With Alberta's Brendan Bottcher at 7-2, the four-loss teams — Manitoba's Reid Carruthers, Saskatchewan's Steve Laycock and the wild-card team skipped by Winnipeg's Mike McEwen — needed to win out Friday and the Albertans to lose twice to force tiebreaker games for fourth.

That host Saskatchewan was in the championship round heightened tension and kept attendance high Thursday at the Brandt Centre.

But Gushue edged Laycock 5-4 in an extra end to put the Saskatoon team in the uncomfortable position of relying on Alberta losses, lest Saskatchewan's drought at the Brier extend to 38 years without a title.

"We're cheering for Alberta to lose two tomorrow or else we're out. And we have to win out," Laycock said. "There's definitely a chance it could happen and we've got winnable games tomorrow."

In an effort to include all provinces and territories, a Northern Ontario team, a defending champion and have an even number of teams for two pools, Curling Canada instituted this format at both the national men's and women's championships this year.

An offshoot of the top four teams from each pool advancing meant Thursday was the first time in the tournament Gushue was in the same draw as Jacobs, Laycock and Carruthers.

"I saw (Manitoba lead) Colin (Hodgson) yesterday and said 'you guys are in this event?' We literally had not seen them since the opening ceremonies," Gushue explained. "I had no idea how those guys were playing, the tone of their team, which is a big part of playing in an event like this.

"You look over and see how guys are firing, if they're bickering at each other or if they're making big shots. That's a big part of it. All of sudden we're into Thursday and this is the first time I've seen them."

Bottcher bounced back from an 8-6 loss to Saskatchewan earlier with an 8-2 thumping of Manitoba's Carruthers.

"Just the way this format is just escalates all the anxiety and tension into these last two days, which I guess isn't bad. It makes for good TV," the Alberta skip said.

"There's a lot of good games out there now and you see guys looking around at other sheets trying to figure out just what that means."

McEwen, who got into the tournament via a wild-card win last Friday, had a demoralizing Thursday.

After giving up a steal of two in the 10th to fall 8-7 to Ontario, his team trailed Northern Ontario 7-0 after two ends en route to an 8-1 blowout loss. Jacobs scored six in the first end.

"We got to a point where we were one shot away from disaster and that's what happened," McEwen said.

The loser drops to the semifinal to face the winner of the Saturday playoff between the third and fourth seeds. The semifinal will be played earlier Sunday, so the bronze-medal game has been eliminated.

Epping, who is making his Brier debut, downed Nova Scotia's Jamie Murphy 8-6 at night after pulling out a win over McEwen.

"That was two grinding wins out there today," Epping said. "That's right in our wheelhouse. We never do anything easy and it continues."

Sunday's champion represents Canada at the world championship in Las Vegas from March 31 to April 8. Gushue's team is the defending world champion having won the title last year in Edmonton.