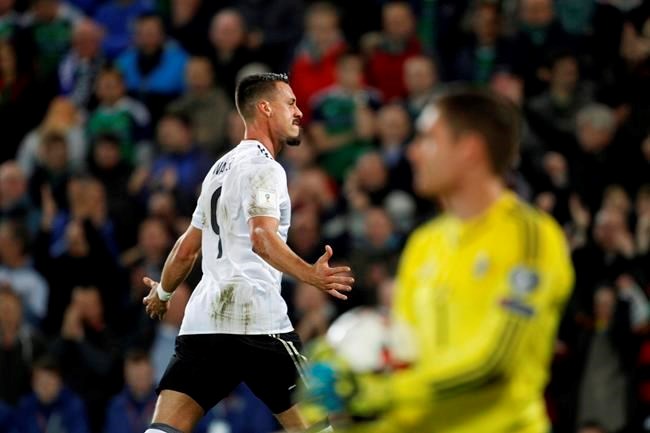 Sebastian Rudy and Sandro Wagner scored in the first half and Joshua Kimmich wrapped it up late as Germany made it nine wins from nine games to be certain of finishing top in Europe Group C.

Josh Magennis claimed the home side's consolation after a corner in injury time.

Germany moved eight points clear of Northern Ireland, which was already assured of at least second place, with just one round of games remaining.

Group winners qualify automatically for the finals in Russia, while the top eight runners-up from nine groups go on to playoffs to decide the other four places allocated to Europe.

Already out of contention, the Czech Republic defeated Azerbaijan 2-1 in Baku to move to third, and Mohamed "Moi" Elyounoussi scored a hat trick in Norway's 8-0 rout of San Marino.

Germany coach Joachim Loew said before his side's game in Belfast that he wants to complete qualifying with 10 wins from 10 games, a feat accomplished previously only by Spain before it won the 2010 World Cup in South Africa.

Northern Ireland's only goals conceded in qualifying had been the two Germany scored in their previous meeting last year in Hannover.

The home side hadn't lost a qualifier in Windsor Park for four years, but it got off to a bad start when Rudy claimed his first goal for Germany by hammering a brilliant strike from distance inside the top corner in the second minute.

"I don't think so," the midfielder said when asked if he'd ever scored a better goal.

Northern Ireland goalkeeper Michael McGovern displayed great reflexes to deny Wagner, who hit the left post with a glancing header before he finally scored in the 21st.

The forward took Thomas Mueller's pass and turned past Gareth McAuley before unleashing a curling shot beyond McGovern.

"We knew it would be hard to score here. That we got the goal so early and then followed it up with another provided the ground stone for the win," Kimmich said.

Corry Adams had a good chance minutes before the break, when Marc-Andre ter Stegen saved for Germany, and the home side's improvement continued in the second half.

Conor Washington grazed the crossbar with over 10 minutes still to play.

Kimmich then ended any hopes of a comeback by beating McGovern at his near post.

Magennis got the enthusiastic home fans singing again with his late header.