TORONTO — It was vintage Ricky Ray. After struggling for three-plus quarters, Ray rallied Toronto to a wild 25-21 East Division victory over Saskatchewan on Sunday afternoon.
Nov 19, 2017 8:57 PM By: Canadian Press 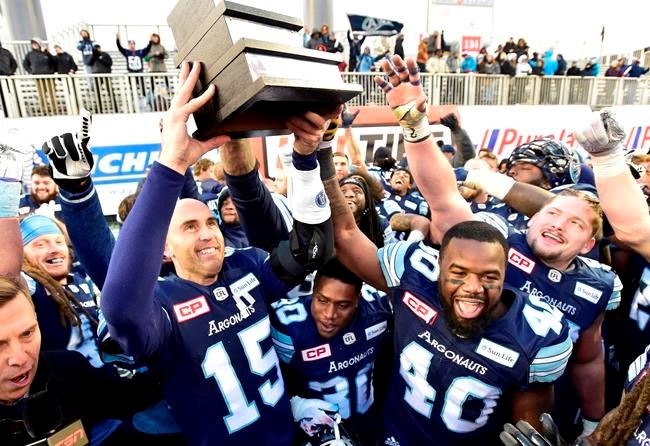 TORONTO — It was vintage Ricky Ray.

After struggling for three-plus quarters, Ray rallied Toronto to a wild 25-21 East Division victory over Saskatchewan on Sunday afternoon. With the Argonauts trailing 21-18 and going against a stiff 54 kilometre-an-hour wind, Ray marched his offence 67 yards to the Roughriders' one-yard line, setting up Cody Fajardo's winning one-yard TD run with 23 seconds left.

"To be put in that situation and see the guys go out and execute really well . . . and go down and score, it feels awesome right now," Ray said. "It feels really awesome.

"They (game-winning drives) are all special but just being in this moment right now, man, with everything that was on the line, this one feels pretty good."

Ray kept the drive alive with a clutch 22-yard completion to running back James Wilder Jr. on a third-and-five gamble. That put Toronto at the Saskatchewan 18 with 1:08 remaining.

"We got great coverage, he ran a great route and made a big catch to keep that drive going," Ray said.

Saskatchewan's defence had done well to that point containing Ray, who finished 28-of-39 passing for 266 yards with a TD and interception. Christion Jones put the Riders ahead 19-18 with 2:45 remaining with a 79-yard punt return touchdown before Canadian Brandon Bridge hit Duron Carter on the two-point convert.

"It's tough when you lose a ballgame of this magnitude but on top of that when you play good defence all day and it's right there when you need it and you just can't get a stop," Saskatchewan head coach/GM Chris Jones said. "We got some shots on (Ray) but he's a tough guy, he got right back up and made the play when he needed to.

"Yeah, he made a perfect throw there to Wilder when he had to have it. That's vintage Ricky Ray."

Christion Jones, despite registering the game's biggest play to that point, admitted he didn't feel comfortable when Toronto took possession.

"You get a guy like Ricky Ray and those great receivers and that great running back (Wilder) and they'll make you sweat," he said. "They executed and did what they needed to do.

Toronto cemented the win when Akwasi Owusu-Ansah recovered Carter's attempted lateral. The Argos return to the Grey Cup for the first time since winning in 2012 and will face the Calgary Stampeders on Sunday at Ottawa's TD Place.

Both offences struggled, committing a combined seven turnovers (four interceptions, two fumbles, once on downs). But Toronto was opportunistic, scoring 17 points off the Riders' miscues, delighting the enthusiastic gathering of 24,929, the Argos' largest crowd ever at BMO Field.

Among those attending were Toronto Maple Leafs forwards Auston Matthews and Mitch Marner and head coach Mike Babcock, who donned his Riders' apparel sitting next to Argos owner Larry Tanenbaum, who's also the chairman of Maple Leafs Sports & Entertainment, which owns the Leafs.

"We didn't do much offensively until the last drive of the game," Toronto head coach Marc Trestman said. "We did enough to win.

"We've had a number of end-the-game drives whether we've won or lost. Vintage Ricky Ray. You can put quotes around anything you want. He's the guy who's driven this whole thing through the whole year."

It's certainly been a turnaround year for Toronto after missing the playoffs in 2016 with a 5-13 mark. GM Jim Barker was fired before head coach Scott Milanovich resigned to join the NFL's Jacksonville Jaguars.

On Feb. 28, Toronto hired Jim Popp as GM and Trestman as head coach. The two had worked together in Montreal, leading the Alouettes to three Grey Cup appearances (two wins) from 2007-12 before Trestman left to became head coach of the NFL's Chicago Bears.

Ray's future in Toronto was also in question after injuries had limited him to 12 regular-season appearances over the previous two years. When Trestman was hired, he boldly named Ray his starter.

Ray certainly fulfilled that confidence. He started 17 regular-season games and surpassed the 5,000-yard passing mark for the first time since '08 and fourth time overall, joining Hall of Famers Anthony Calvillo and Doug Flutie as the only players to do so.

That earned Ray his third nomination as a finalist for the CFL's outstanding player award against Edmonton's Mike Reilly. It's one of the few awards Ray, a three-time Grey Cup champion, hasn't won over his illustrious 15-year career in Canada.

Saskatchewan was attempting to become the first crossover team to reach the Grey Cup since the rule was adopted in 1996. The Riders were 2-0 versus Toronto this year and defeated the defending-champion Ottawa Redblacks 31-20 in last weekend's East Division semifinal.

Saskatchewan won the toss and deferred, opting to have the wind in the fourth. And it almost paid off as when the Riders got the ball with 12 minutes left at their 17-yard line, they trailed 18-3.

Bridge of Mississauga, Ont., cut the deficit to 18-10, finding Carter on an 11-yard TD pass at 5:57, the first playoff touchdown pass by a Canadian since Ottawa's Russ Jackson did so in the '69 Grey Cup game. Saskatchewan pulled to within 18-13 on Tyler Crapigna's 28-yard field goal with 4:44 remaining before going ahead on Jones' TD. Bridge then hit Naaman Roosevelt for the two-point convert and three-point lead.

It was a disappointing end to the season for Saskatchewan starter Kevin Glenn, a 17-year veteran still in search of his first Grey Cup victory. Glenn threw three first-half interceptions — one that was returned for a TD — before being replaced for good to start the second half by Bridge.

Terrance Plummer, on a 39-yard interception return, and DeVier Posey had Toronto's other touchdowns. Lirim Hajrullahu added the converts and two field goals.