SEOUL, Korea, Republic Of — The Korean Baseball Organization has suspended ex-Pittsburgh Pirates infielder Jung Ho Kang for a year and ordered him to perform 300 hours of community service over a series drunk driving cases.
May 25, 2020 11:36 PM By: Canadian Press 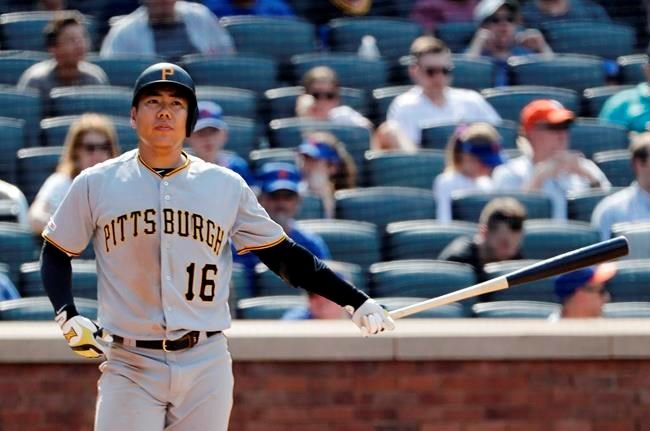 SEOUL, Korea, Republic Of — The Korean Baseball Organization has suspended ex-Pittsburgh Pirates infielder Jung Ho Kang for a year and ordered him to perform 300 hours of community service over a series drunk driving cases.

League organizers issued a statement saying the suspension will come into effect when Kang signs a contract with a club. The KBO said Kang earlier this month submitted an inquiry about a return to the South Korean baseball league and a letter of apology.

Kang signed with Pittsburgh in January 2015, becoming the first position player to jump directly from the KBO to the majors.

He made a splash as a rookie, finishing third in Rookie of the Year voting after hitting 15 home runs. His season ended abruptly that September when he broke his leg after getting taken out at second base by Chris Coghlan of the Chicago Cubs.

Kang returned in 2016 and hit 21 home runs before his career went into a tailspin after getting arrested in Seoul in December 2016 on charges of driving under the influence of alcohol. Kang had two previous DUI cases in 2009 and 2011, according to the KBO.

Kang received a two-year suspended sentence, spent the entire 2017 season on the restricted list after being unable to secure a visa back to the U.S. and played in just three games at the end of the 2018 season. The Pirates initially cut him before bringing him back on a one-year deal worth $3 million for the 2019 season, when he hit .169 with 10 home runs and had RBIs in 65 games.

The KBO said that the latest disciplinary sanction was imposed because Kang undermined the KBO’s image, disappointed fans and caused public concern.

Yonhap news agency said Kang issued an apology through his agent, asking for one more opportunity to play baseball and saying he’d taken the game for granted.

“I was a fool not to see how precious it was,” Kang said in the statement.

NHL/NHLPA announce tentative agreements on return-to-play protocol, new CBA
Jul 6, 2020 8:32 PM
Comments
We welcome your feedback and encourage you to share your thoughts. We ask that you be respectful of others and their points of view, refrain from personal attacks and stay on topic. To learn about our commenting policies and how we moderate, please read our Community Guidelines.