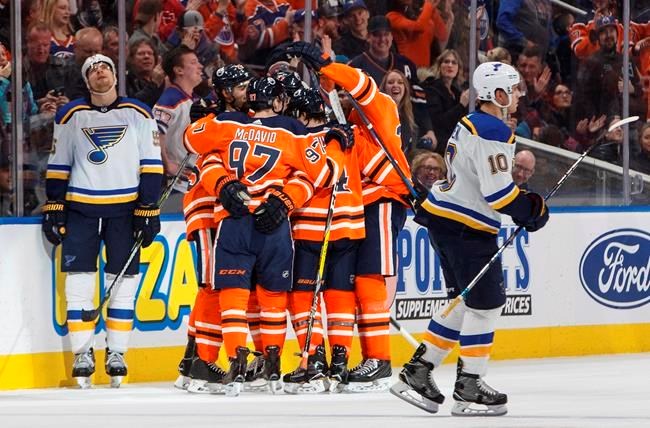 EDMONTON, B.C. — The Edmonton Oilers are starting to make up for their early-season struggles.

Drake Caggiula scored the go-ahead goal at 19:10 of the third period as the Oilers won their third game in a row for the first time this season, defeating the St. Louis Blues 3-2 on Thursday.

Caggiula took a pass in front from behind the net by Ryan Nugent-Hopkins and beat Blues goalie Jake Allen with 49.8 seconds left on the clock.

Michael Cammalleri and Connor McDavid also scored for the Oilers (16-17-2), who have won four of their last five games.

"Big win, we hadn't won three in a row yet this year, which is pretty remarkable. Nice to be able to do that," McDavid said. "It felt a lot like last year, the crowd was into it. We had a lot of opportunities tonight where we could have just folded our hand and gone to sleep. We didn't."

Oilers goalie Cam Talbot, who won his sixth consecutive start, agreed that the team seems to be regaining its form.

"You go down by a goal twice against a team like that, a really good defensive team, and are able to battle back, the resiliency on this team right now is at a level that we saw last year," he said. "It is good to see it coming back. When we are playing with that kind of confidence, it is great to see from our group. Hopefully we can continue it."

Tage Thompson and Patrik Berglund responded for the Blues (22-13-2), who have lost three in a row and five of their last six.

"I thought we played the way we wanted to play, but I thought once we scored, then we totally played on our heals and it became a free-for-all game both ways," said Blues forward Paul Stastny. "It seems like whether we're up 1-0 or we're down 1-0 we completely change our game."

The Blues had the best chances in a scoreless first period, outshooting Edmonton 11-5. Edmonton had a good chance midway through the second, but a Darnell Nurse shot hit a post and slid through the crease under a diving Allen to safety. It was the Oilers' fourth post of the game to that point.

The scoreless deadlock continued through 40 minutes with the shots favouring the Blues 26-19.

Stastny had a glorious opportunity seven minutes into the third when he stole the puck from Talbot behind the net, but the Oilers goalie was able to make a desperate leap to prevent the wrap-around attempt.

The Blues finally scored with 10:30 left in the third period as Thompson got a shot through traffic past Talbot for his first career NHL goal.

However, Edmonton tied it up 38 seconds later on a wrist shot by Cammalleri.

St. Louis regained the lead with 6:38 left, as Berglund scored on a one-timer, but Edmonton came flying back once again as McDavid waited for Allen to go down before lifting in his 13th goal of the season with 3:41 left.

Both teams return to action on Saturday as the Oilers host to the Montreal Canadiens and the Blues travel to Vancouver to face the Canucks.

Canada's Alphonso Davies helps Bayern beat Dortmund 3-2 to lift German Super Cup
Sep 30, 2020 5:14 PM
Comments
We welcome your feedback and encourage you to share your thoughts. We ask that you be respectful of others and their points of view, refrain from personal attacks and stay on topic. To learn about our commenting policies and how we moderate, please read our Community Guidelines.