PHILADELPHIA — With DeMar DeRozan knocking down 3-pointers early, Toronto Raptors coach Dwane Casey thought he was back in Seattle. Down the stretch, Casey watched DeRozan do what's made him a three-time All-Star: get to the foul line.
Dec 21, 2017 11:01 PM By: Canadian Press 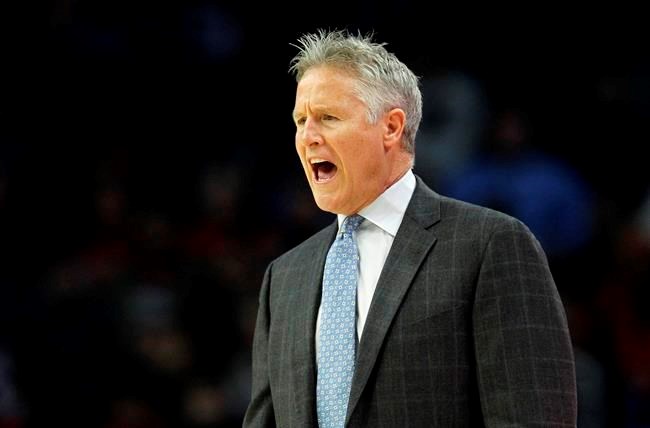 PHILADELPHIA — With DeMar DeRozan knocking down 3-pointers early, Toronto Raptors coach Dwane Casey thought he was back in Seattle.

Down the stretch, Casey watched DeRozan do what's made him a three-time All-Star: get to the foul line.

DeRozan combined the two to score a career-high 45 points and the Raptors overcame a 22-point deficit to beat the Joel Embiid-less Philadelphia 76ers 114-109 on Thursday night.

"I thought he was a young Ray Allen," Casey said about DeRozan's 4-of-4 first-quarter shooting from 3, reminiscing of his days as an assistant coach with the Seattle SuperSonics in the early 2000s. "That's what we need from him. It opens up the floor, especially on nights when we just didn't have it. We were playing in mud in the first half."

DeRozan became more conventional in the fourth quarter. His jumper with 4:13 left put the Raptors ahead to stay after they trailed 76-54 early in the third quarter.

He hit two free throws with 53 seconds left after Philadelphia's Robert Covington missed a go-ahead 3-point attempt, and then two more with 6.4 seconds left put it away.

DeRozan finished 13 of 15 from the line to best the 43 points he scored against Boston last season. The Sixers only took 14 free throws as a team.

"That's been my career the past few years, getting to the free throw line," DeRozan said. "Being able to close out the game and me understanding to slow the game down. Get the momentum going our way and try to kill them at the free-throw line."

Kyle Lowry added 23 points to help the Raptors to their 11th win in 12 games.

"Sometimes you're going to have games where you let your All-Star, your superstar, take over," Lowry said of DeRozan.

Ben Simmons scored 20 points but had seven of the Sixers' 23 turnovers in their fourth straight loss. Covington added 19 points and Dario Saric had 18 points, 10 rebounds and nine assists.

Philadelphia, which blew a 16-point lead Tuesday night in a loss to Sacramento, fell to 1-7 without Embiid.

It was another day of uncertainty and false hope for the Sixers regarding their oft-injured franchise , who went from questionable to probable to out in eight hours.

Embiid missed two games with back tightness after logging a career-high 49 minutes in a triple-overtime loss to Oklahoma City last Friday. But the big man participated in shootaround and coach Brett Brown said less than two hours before tipoff that Embiid was "probable" and would play barring a setback in warmups.

Embiid didn't show any discomfort during pregame drills, but was ruled out about 30 minutes before tipoff.

"He felt OK in the morning and then half an hour before the game, we learned he didn't feel comfortable playing." Brown said. "So we decided to rest him again."

The Sixers were also without starting shooting guard JJ Redick (right hamstring), but used Covington's 5-of-7 shooting from 3-point range to race ahead by 22.

Things quickly fell apart. Lowry and Delon Wright (12 points) got hot in a 22-2 run that included bad passes and poor shots by the Sixers.

Embiid has played in 54 of a possible 277 games since being the No. 3 overall pick in the 2014 draft. That includes two lost years to foot injuries and last season being cut short by knee surgery. He's yet to be cleared to play on consecutive days because of his knee, and his back has been an on-and-off problem.

Canadiens sign goaltender Michael McNiven to one-year, two-way contract
Sep 30, 2020 5:24 PM
Comments
We welcome your feedback and encourage you to share your thoughts. We ask that you be respectful of others and their points of view, refrain from personal attacks and stay on topic. To learn about our commenting policies and how we moderate, please read our Community Guidelines.