CARSON, Calif. — Nathan Peterman's first NFL start for the Buffalo Bills was going just fine until his third pass deflected off his receiver's hands. It was snatched by the Chargers' Korey Toomer, who took it back for a touchdown.
Nov 19, 2017 8:43 PM By: Canadian Press 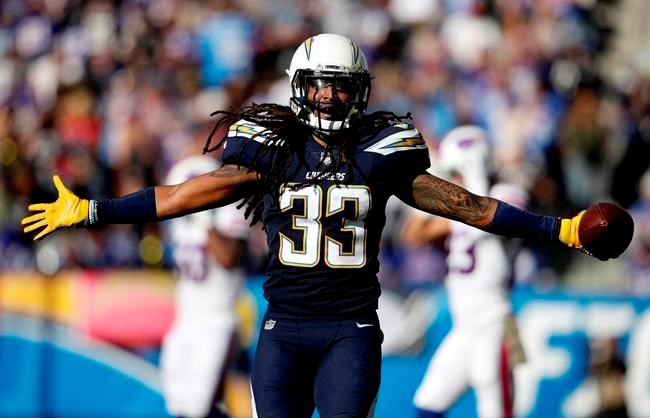 CARSON, Calif. — Nathan Peterman's first NFL start for the Buffalo Bills was going just fine until his third pass deflected off his receiver's hands. It was snatched by the Chargers' Korey Toomer, who took it back for a touchdown.

That bad break triggered an avalanche of interceptions for the fifth-round pick, whose day devolved from a disappointment to an embarrassment — and finally to a full-fledged fiasco.

And even after throwing five interceptions in the first half of a 54-24 loss to Los Angeles on Sunday, Peterman might get another chance to get it right next week.

"I didn't play very well," Peterman said. "When those things start to happen, I've got to be able to let it go."

Peterman was pulled from his first NFL start with a 37-7 halftime deficit after just 14 pass attempts for the Bills (5-5), who lost their third straight.

"Guys all over the team were saying encouraging things," Peterman said. "They were saying, 'Hey, you're young, and you're going to learn from this,' and telling me a lot of their stories, too. I've got a lot of great teammates."

Buffalo benched Tyrod Taylor and promoted the fifth-round pick from Pitt earlier this week despite being in playoff position. Coach Sean McDermott replaced Peterman with Taylor in the second half, and the veteran went 15 of 25 for 158 yards, throwing one TD pass and rushing for another score.

Afterward, McDermott said he hasn't decided who will start next Sunday against Kansas City. He plans to evaluate film of this game "and take my time."

"It wasn't what he had hoped for, or what we had hoped for," McDermott said. "At the same time, when you put a young player out there, a young quarterback, there's going to be some ups and downs. Today is not indicative of who he is as a player."

The Chargers (4-6) thoroughly capitalized on Peterman's mistakes, putting up a 27-point second quarter and their highest-scoring performance in Philip Rivers' 195 consecutive starts since 2006. Los Angeles set a franchise record for points in a first half during the Bills' worst defensive half since 1977, and the Chargers posted a resounding win for coach Anthony Lynn, who finished last season as Bills interim coach.

"Sometimes (takeaways) come in bunches, and they came today in bunches," Lynn said. "And our took advantage of them most of the time. ... Regardless of who they started at quarterback, we didn't play dumb football."

Joey Bosa particularly harassed Peterman, with his pressure contributing to Peterman's second and third picks. Bosa also forced a fumble while sacking Taylor on fourth down in the third quarter, and Melvin Ingram returned it 39 yards for a touchdown.

Peterman threw his third interception to Tre Boston while getting planted on his back by Bosa, and Allen then caught his first touchdown pass since the Chargers' opener on a beautiful back-shoulder throw by Rivers.

Los Angeles took a 47-10 lead in the third quarter and got many of its regulars off the field in the second half to rest for its Thanksgiving game at Dallas.

Taylor hit LeSean McCoy with a 12-yard TD pass on fourth down in the fourth quarter. McCoy also rushed for 114 yards and an early score.

"I still plan to support Nathan if he's the guy," Taylor said. "Of course I believe in my ability. I think I'm a starter. ... There's definitely some things that we have to talk about as a leadership council. I'm pretty sure over the next couple of days things are going to definitely have to be talked about."

One week after a heartbreaking overtime loss in Jacksonville, the Chargers snapped a two-game skid and got back into fine form on both sides of the ball. Melvin Gordon and Austin Ekeler rushed for TDs, and Nick Novak kicked four field goals.

Rivers passed for 250 yards and Keenan Allen had 12 receptions for 159 yards and two touchdowns for the Chargers.

"It felt good," Rivers said. "The obviously helped out quite a bit. We had optimal field position, but we executed at a much better level offensively, much better rhythm and flow."

Bills: Buffalo lost new WR Kelvin Benjamin to a right knee injury after a 20-yard catch on their opening drive, and S Micah Hyde injured his knee early in the second half. McDermott had no postgame update on either player.

Rivers spent the week in the NFL's concussion protocol after reporting symptoms on Monday , but he was cleared in time to keep alive his streak of consecutive starts since the 2006 opener. The veteran went 21 of 33 before Kellen Clemens played the fourth quarter.

Bills kicker Stephen Hauschka set an NFL record by making his 13th consecutive field goal of 50 yards or longer during the third quarter.

Chargers: At Dallas Cowboys on Thursday.