Ajou Ajou knew the first day he stepped foot at Clemson that's where he wanted to be. It was in June 2019 when the six-foot-three, 215-pound receiver from Brooks, Alta., was at the school attending Tigers' coach Dabo Swinney's summer football camp.
Oct 26, 2020 4:17 PM By: Canadian Press 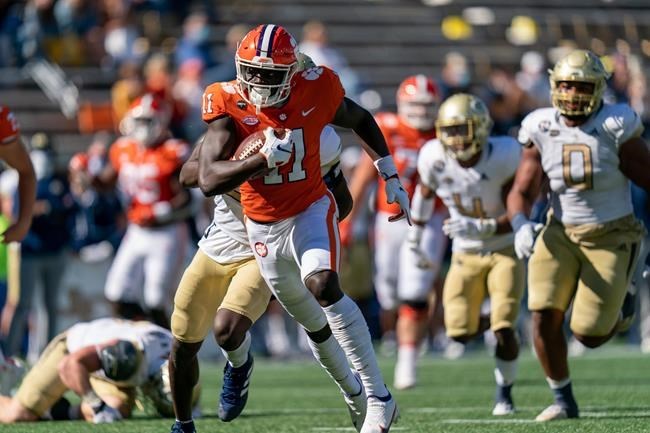 Ajou Ajou knew the first day he stepped foot at Clemson that's where he wanted to be.

It was in June 2019 when the six-foot-three, 215-pound receiver from Brooks, Alta., was at the school attending Tigers' coach Dabo Swinney's summer football camp.

"I wanted to say, 'Yeah, I'm committed,'" Ajou said during a videoconference Monday. "But he (Swinney) was the one who said, 'I don't want you to commit now, I want you to go look at your options, you're still new to this.'

"But I definitely already knew I was coming here."

The 18-year-old Canadian has made an impact with the top-ranked Tigers (6-0). Ajou has dressed for all of Clemson's games this year as a true freshman, registering two catches for 41 yards and a TD.

And although Ajou - pronounced uh-JOE - scored in a lopsided 73-7 victory over Georgia Tech on Oct,. 17, he certainly raised eyebrows. After catching a screen pass, Ajou weaved his way through the Yellow Jackets' defence for a 35-yard TD completion.

"They called the play, and I'm like, 'Oh, this is coming to me. OK, be ready,'" Ajou recollected. "I catch the ball and look and it's like, 'Oh man this is really happening.'

"And I hear the crowd erupt and I'm like 'No way. This just happened?' I was speechless until I sat down on the bench . . . and my teammates were going crazy. it was awesome."

"He's going to be an unbelievable player," Swinney told reporters last week. "He's this uber talented guy, but he knows that he has so much to learn, and he’'s not afraid of that . . . he's not too cool for school.

"This kid will be one of the funnest guys that I have a chance to coach."

Ajou, who played his senior season at Clearwater (Fla) Academy International in 2019, agrees with Swinney.

"There's definitely still a lot to learn," he said. "The biggest thing for me was just the competition because Clemson is the best and you compete against the best every day.

"Going one-on-one getting off the press, I've really got to work on that. Just playing faster, full speed all the time, staying low because I'm such a tall guy. I've got to work on those things."

Ajou didn't have to look far for inspiration while playing football in Alberta. He said Chuba Hubbard, a running back from Sherwood Park, Alta., who ran for over 2,000 yards last year at Oklahoma State, helped teach him to think big.

"I remember watching Chuba get his first touchdown (in 2018)," Ajou said. "It's like, 'Wow, one day, I promise you, one day I'm going to be there. They're going to be talking about me like they talk about him.'"

"Stay working, stay on the grind, man, block out all the outside noise and just do you," Ajou said. "He kind of started this whole NCAA thing in Alberta and so l kind of look up to him.

"He's doing great over there and so follow his recipe."

Hubbard, a junior, and senior linebacker Amen Ogbonbemiga, of Calgary, have helped the Cowboys (4-0) stand sixth in the overall rankings. But 2020 is fast becoming the year of the Canadian receiver in NCAA football with the likes of seniors Terrell Jana (a Vancouver native at Virginia) and Josh Palmer (Brampton, Ont., Tennessee) and sophomores John Metchie III (Brampton, Ont., Alabama) and Jared Wayne (Peterborough, Ont., Pittsburgh) among those making significant contributions.

And then there's Chase Claypool, of Abbotsford B.C., who's having a stellar rookie season with the Pittsburgh Steelers (6-0), the lone unbeaten team in the NFL. The former Notre Dame star has 18 catches for 333 yards (18.5-yard average) and four TDs while having also run for two scores.

"It's amazing because we can finally showcase our talents at such a level and show that Canadians got it too," Ajou said. "Chase Claypool is kind of leading the way right now with Pittsburgh.

Ajou says there's plenty to like about life at Clemson.

"The practices, they push you to your limits, they want the best out of you but they're going to treat you right. They really put school first, you're a student before the athlete. I really like that because after football what's going to happen? They just emphasize that."

And South Carolina kind of reminds him of Alberta.

"When you're driving into Clemson, we took the backroad so it was like country and farms and looking kind of like Brooks," he said. "I heard the population here was 14,000 and Brooks' population is 14,000 and I was like, 'You can't even make this up.'

"Everyone is nice, everyone wants to see you grow and win. It's kind of like Brooks in the sense because it takes a village to raise a child. Just the coaches and the way they help me and make sure I'm good in anything. I just love that."

Ajou has a simple message for Canadian high-school players hoping to head south.

"Anything you can put your mind to you can do," he said. "I just hope you choose the right program for you.

"Just choose a program with great people and work your hardest."

Ajou admits he'd like to play ultimately pro football but will cross that bridge when he gets to it.

"Wherever God takes me, really, he's got a plan for me," he said. "I just have to stay on the right path."

This report by The Canadian Press was first published Oct. 26, 2020.