SAN JOSE, Calif. — Brent Burns makes things difficult when he's only playing one position in a game. Switching positions during the game makes it even harder.
Feb 16, 2018 2:31 AM By: Canadian Press 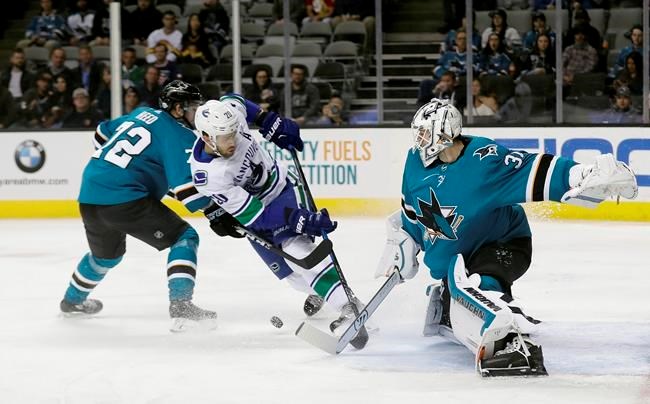 SAN JOSE, Calif. — Brent Burns makes things difficult when he's only playing one position in a game. Switching positions during the game makes it even harder.

Burns and Chris Tierney each had a goal and an assist, and the San Jose Sharks beat the Vancouver Canucks 4-1 on Thursday night for their third win in four games.

Mikkel Boedker and Marcus Sorensen also scored for the Sharks, who improved to 3-0-1 against the Canucks this season. Martin Jones stopped 43 shots.

Burns lined up as a wing during the first period but was a when he scored in the second period.

"It's fun to play hockey in the NHL. It doesn't matter where," Burns said. "I don't mind switching back and forth. It's all chemistry and the way you mesh together."

Burns said he learned about playing forward from Joe Thornton and Joe Pavelski and that he constantly works on his game to fine-tune things.

"He's a heck of a player," Canucks coach Travis Green said. "To be able to throw him all over the place ... there's a reason he's one of the best players in the league. He's the whole package. He's got good vision. He's got a hammer of a shot. He doesn't just shoot the puck; he gets it through. And he's hard to forecheck. He's just a really good player."

Daniel Sedin scored for the Canucks, who have lost six of seven. Anders Nilsson made 26 stops.

"We have to try and be more consistent with our game no matter what the score is or how things are bouncing," the Canucks' Bo Horvat said. "We have to stick with the process and I thought we did a good job of that tonight. A couple of breakdowns and it cost us."

Boedker scored at 8:41 of the first period, picking up a soft rebound from Tierney's shot.

Burns scored his 10th goal, tops among NHL , taking a pass from Joakim Ryan and sending a laser shot into the net just under five minutes into the second.

"He's got the best shot in the league by any ," Ryan said. "He has an unbelievable shot and he's responsible defensively."

Sorensen scored his first goal since Dec. 23, punching it in with an assist from Justin Braun at 3:06 into the third. Marc-Edouard Vlasic had an assist in his third straight game, getting the second assist on Sorensen's goal.

Sedin scored at 6:43, taking a nice pass from Thomas Vanek that gave him clear shot into the net. It was Sedin's 14th goal, one shy of his total last season.

"I thought we generated a lot of good opportunities, a lot of shots, a lot of chances," Horvat said. "We didn't spend a lot of time in our own end."

Tierney made it 4-1 after taking a nice pass from Burns with 7 1/2 minutes remaining.

NOTES: D Tim Heed was recalled from the AHL and joined a makeshift Sharks lineup, allowing Burns to play up front at times. ... Sharks C Logan Couture has points in four of his last five games. ... Sedin has five points against the Sharks this season and 45 in 69 games. He's recorded points in three straight. ... The Canucks recorded a season high in shots.

Team Matt Dunstone considers relocation due to restrictions in Saskatchewan
Oct 23, 2020 10:43 PM
QMJHL Roundup: Defenceman Nathan Larose leads Cape Breton over Halifax 5-3
Oct 23, 2020 9:02 PM
Canada's Felix Auger-Aliassime advances to Cologne Championship semifinal
Oct 23, 2020 8:37 PM
Comments
We welcome your feedback and encourage you to share your thoughts. We ask that you be respectful of others and their points of view, refrain from personal attacks and stay on topic. To learn about our commenting policies and how we moderate, please read our Community Guidelines.