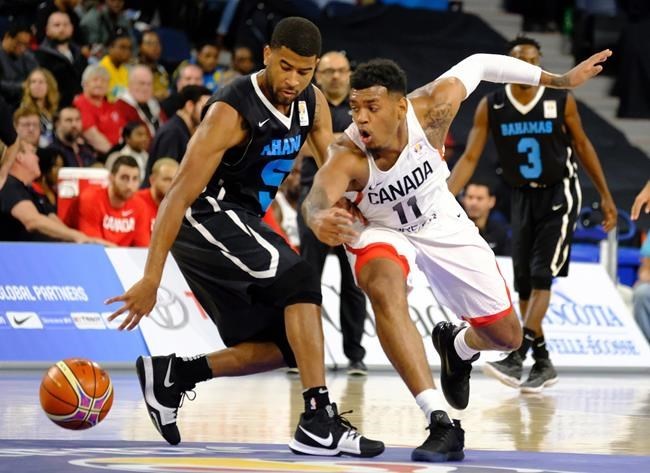 HALIFAX — Brady Heslip wasn't going to take all the credit for Canada's first victory at the FIBA Americas qualifier.

Heslip had a game-high 22 points as Canada's men's national team opened their bid to get back to the World Cup with a 93-69 win over the Bahamas on Friday in the opening game of the tournament.

The Oakville, Ont., native, who hit six three-pointers and went 7-of-11 overall from the floor, says teammates Philip Scrubb and Xavier Rathan-Mayes made it easy for him to get good looks.

"All the guys just really found me when I was open. I didn't have to dribble too much," Heslip said. "Phil and Xavier made a couple of great passes and when those guys are doing what they're doing and finding me wide open, they do all the work and I'm just shooting open shots."

The Bahamas kept it close early before Heslip caught fire to help Canada build a 21-11 lead by the end of the first quarter. The former Baylor University guard scored five of his three-pointers in the first half.

Canada played suffocating defence in the second quarter as the Canadians limited the Bahamas to just six points. They went to the dressing room leading 45-17 at the half.

Canadian coach Roy Rana was happy with his team's effort.

"The guys really committed to the game plan and that's a testament to them," he said. "They were very good at communicating with each other on the floor."

Jaraun Burrows led the Bahamas with 15 points and Shaquille Cleare had 12.

Bahamas coach Mario Bowleg said his team came out flat-footed in the first half.

"We're an athletic team and we are a better shooting team and a better defensive team than we showed," Bowleg said. "Not taking anything away from Canada, they played great defence and made their shots."

The Bahamas came alive in the second half and outscored Canada 52-48, but never got closer than 22 points the rest of the game.

"It's tough to play when you're up that much," said Canada forward Owen Klassen. "I know you never want to have a letdown and give up so many points in the second half. They switched their defence that gave us a little bit of trouble when it first happened."

Cleare thought his team didn't play their style in the first half and that's why they fell behind so early.

"It put us in the hole," Cleare said. "In the second half we played with more fire and played Bahamas basketball."

Scrubb said the Bahamas was way more aggressive in the second half.

"We didn't really match their aggressiveness and kind of got back on our heels and let guys defend 1-on-1 instead of a team defence," said Scrubb, who thinks the little bit of adversity Canada faced in the second half will help down the road.

The Canadians get on a plane early Saturday to fly to the Dominican Republic for its second qualifying game on Monday.