NEWARK, N.J. — Brian Boyle has had some misty moments on ice this season for the New Jersey Devils. The first was on Nov. 9 when he cried after scoring the first goal in his comeback from chronic myelogenous leukemia.
0
Nov 24, 2017 11:20 PM By: Canadian Press 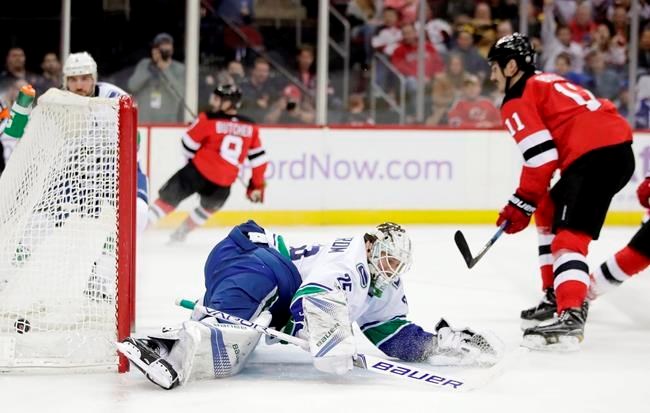 NEWARK, N.J. — Brian Boyle has had some misty moments on ice this season for the New Jersey Devils.

The first was on Nov. 9 when he cried after scoring the first goal in his comeback from chronic myelogenous leukemia. The was diagnosed with the disease during training camp and missed the first 10 games of the season while undergoing treatment.

The second was Friday when he scored on "Hockey Fights Cancer Night" to help the Devils beat the Vancouver Canucks 3-2.

"It's part of a club you don't necessarily want to be in," Boyle said of his fellow cancer survivors who attended the game. "I'm doing really well. I feel great. The support from everybody here, all you guys (gesturing to the fans), unbelievable."

It was another chapter in an already remarkable story.

The Prudential Center erupted with cheers when Boyle, set up by a beautiful drop pass from Will Butcher, scored at 10:17 of the second period to snap a 1-1 tie.

"He has a flair for the dramatic. It gives you chills," said Taylor Hall who sparked the Devils with a goal and two assists. "I can't imagine what it's like being him, what he's been through, what his family's been through. To come back, play well for us and score on Hockey Fights Cancer Night, it's awesome to see and puts a lot of things in perspective for us as hockey players."

Damon Severson also scored for New Jersey and Cory Schneider made 23 saves to improve to 6-1-2 against the team that made him a first-round draft pick in 2004.

The win gave the Devils a sweep of the two-game season series, having beaten the Canucks 2-0 in Vancouver on Nov. 1.

Daniel Sedin and Bo Horvat scored for Vancouver, one of the NHL's top road teams. The loss ended the Canucks three-game road winning streak, including victories in Philadelphia and Pittsburgh to start their current six-game trip.

The Devils had a 10-9 shot advantage in the opening period that lacked quality scoring chances for both sides. Each team had a good opportunity late in the period. Jacob Markstrom denied Blake Coleman's drive from the right wing to keep the Devils off the scoreboard, then Schneider squeezed the pads tightly to stop Christopher Tanev's wrister from the slot.

Hall opened the scoring at 2:15 of the second period, ripping a shot from the bottom of the left circle over Markstrom's shoulder.

Daniel Sedin knotted the game at 5:36, setting the stage for Boyle's power-play goal.

Severson cleaned up the rebound after Hall hit the post to put New Jersey ahead 3-1.

In the third, the Canucks provided some late suspense as Horvat, set up by Daniel Sedin, got a power-play scorer at 10:37.

"Sometimes you don't have your legs and you have to find a way to survive, and I thought we did and slowly worked our way back into the game," Daniel Sedin said. "That happens to a lot of teams on the road. It could have gone either way."

The Devils held the Canucks at bay, preserving the win and the night for Boyle and the fans cheering his dramatic goal.

"It says a lot about the fans here in this particular city," Boyle said. "I've felt the love in other cities, but the way they've embraced me here, the fans have reached out. I saw the all the signs. It's a very special feeling."

NOTES: The Devils donned lavender jerseys with "Boyle Strong 11" patches for the warmup skate. Boyle took part in the ceremonial faceoff, where he was joined by his family. ... Canucks D Eric Gudbranson suffered an upper-body injury Wednesday against the Penguins and did not dress against the Devils. . With the two points, Daniel Sedin is only two away from 1,000 for his career.

Devils: At Detroit on Saturday