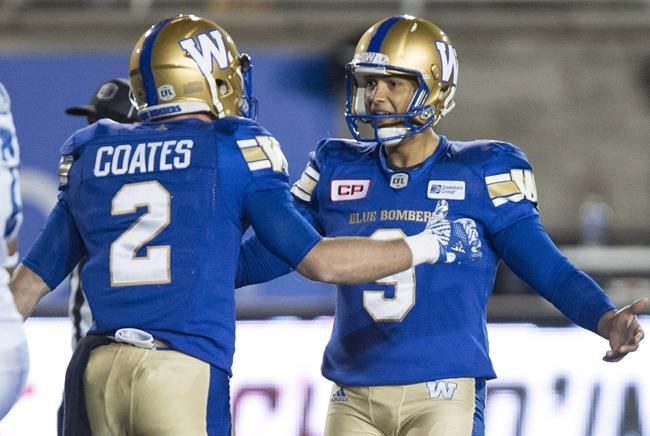 Justin Medlock and the Winnipeg Blue Bombers have another chance to clinch a home playoff game.

Medlock's errant 40-yard field goal attempt gave the Toronto Argonauts a 29-28 home win over Winnipeg on Saturday night. Had Medlock been successful, the Blue Bombers (11-5) would've cemented second in the West Division and their first home playoff contest since 2011.

Winnipeg has another opportunity to do so Saturday afternoon when it hosts B.C. (6-10). The Bombers are 6-2 at Investors Group Field, including a 26-20 decision there over the Lions on Oct. 14 when Medlock made all three field goals he attempted.

Medlock is the CFL's scoring leader with 194 points despite having made 46-of-60 field goals this season. His 76.7 per cent average ranks last among league kickers and in a 28-19 win over Edmonton on Sept. 30 he missed all three boots he tried.

Winnipeg is just 1-2 since then but there are plenty of reasons why.

Quarterback Matt Nichols hasn't had a 300-yard passing performance since throwing for 319 yards and two TDs in a 29-9 win over Ottawa on Sept. 22.
Winnipeg native Andrew Harris, attempting to become the first CFL player to record 1,000 yards rushing and receiving in the same season, has run for 903 yards (48 behind league-leader Jerome Messam on Calgary) but his last 100-yard game was a 105-yard performance in August against Edmonton.

Harris had 32 yards rushing against Toronto and added two catches for four yards, giving him 96 receptions for 820 yards.

One positive was Weston Dressler. The veteran receiver had eight catches for 129 yard and a TD against Toronto after missing three games with an upper-body injury.

The Bombers face a B.C. squad that's reeling. Since beating Saskatchewan 30-15 on Aug, 5 to improve to 5-2, the Lions have dropped eight of their last nine games and five straight.

Jonathon Jennings, who last year was just the fourth quarterback in Lions history to surpass 5,000 yards passing, has thrown more interceptions (15) than touchdowns (12). In fact, B.C. hasn't won since veteran Travis Lulay suffered a season-ending knee injury early in a 41-18 victory over Montreal on Sept. 8.

Winnipeg is 5-3 within the West while B.C. is 3-5 on the road and 2-7 against Western competition.

Darian Durant makes his first visit to Regina since being dealt to Montreal in January. He had two TD passes in a 17-16 season-opening home win over Saskatchewan (9-7) but the Alouettes (3-13) have lost nine straight. Slotback Nik Lewis returns after missing three games (leg). Receiver Duron Carter will play cornerback for a second straight game. He scored on a 43-yard interception return versus Calgary to anchor the Riders' third victory in four contests.

Hamilton (5-11) is 5-3 under interim head coach June Jones and 4-4 on the road following Sunday's 43-16 win over Montreal. Ottawa (7-9-1) is just 2-5-1 at TD Place and last played Oct. 13 in a 33-32 decision over Saskatchewan. A victory would move the Redblacks past idle Toronto atop the East Division. Receiver Brad Sinopoli (shoulder) won't play

Calgary (13-2-1) will host the West Division final but has looked out of sorts since a 59-11 win over Montreal on Sept. 29. The Stamps needed a late pass interference call to secure a 28-25 road win in Hamilton, then lost 30-7 last weekend to Saskatchewan, their first home loss in 18 games. Running back C.J. Gable and kicker Sean Whyte resumed practising for Edmonton (10-6), which has won three straight but is 0-2 this year against its provincial rival.