Fresh off a history-making World Series season, Canadian rugby sevens coach Damian McGrath has unveiled a 2017-18 roster that sees some crossover from the 15s team and the inclusion of Montreal Alouettes speedster Tevaughn Campbell.
Oct 5, 2017 3:48 PM By: Canadian Press 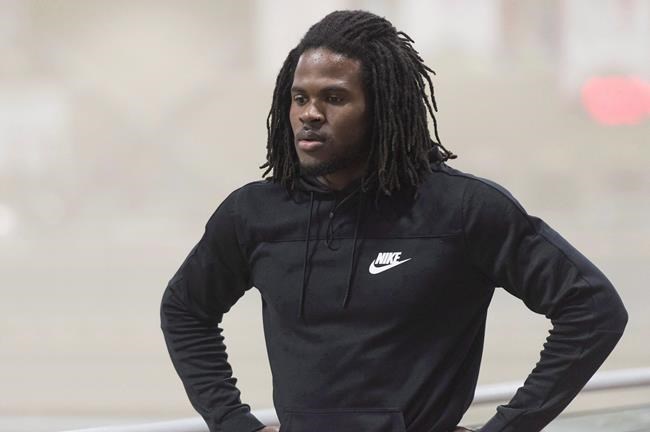 Fresh off a history-making World Series season, Canadian rugby sevens coach Damian McGrath has unveiled a 2017-18 roster that sees some crossover from the 15s team and the inclusion of Montreal Alouettes speedster Tevaughn Campbell.

The six-foot 195-pound defensive back will become a carded member of the sevens program in late November after his CFL duties are done. Campbell, 24, got a taste of the sevens game in April when he trained with the team on a trip to Asia.

"He's got that one thing that you can't add to people, which is out-and-out speed," said McGrath. "Also because of the position he plays in the CFL, he's used to moving side-to-side and backwards-to-forwards."

Campbell, traded to Montreal by Saskatchewan in April, set a CFL combine record in 2015 when he was clocked at 4.355 seconds over 40 yards.

Competing for the University of Regina, Campbell won the U Sports 60-metre final in 2016 and was runner-up in 2015 and '17. While a pro athlete, he can compete in track at the university level because it's not the same sport.

"The little bit we saw of him when he came with us to Singapore and Hong Kong gave me hope that we can develop (his game)," McGrath added. "He's got a real desire to make it work as well, which is fantastic.

"We may not see the best of him in the short-term, but in the longer-term he'll be a real addition to the program."

Adam Zaruba could rejoin the squad in January, depending on his NFL fortunes. Cut by the Philadelphia Eagles in September, the six-foot-five 265-pound would-be tight end is still exploring his NFL options.

After a sluggish start — with three 13th-place finishes in the first four stops — the Canadian men recovered to finish eighth overall on the World Series. The high point came in Singapore where Canada hoisted the cup, its first-ever win in 140 events on the circuit.

The new season kicks off in Dubai in early December. The 10-event World Series, which stops in Vancouver in March, is augmented by the Commonwealth Games in Australia in April and the showcase World Cup Sevens in San Francisco in July.

Because of the crowded schedule, teams like New Zealand and England are looking to bring separate squads to tournaments to keep their players fresh.

"We haven't got that luxury," said McGrath. "We've got to find a way to keep everybody fit and healthy ... We'll take our best team to everything because we want to win everything."

Veterans Harry Jones, John Moonlight and Nathan Hirayama will share the captaincy with speedster Justin Douglas looking to build on a breakout year. Douglas had 40 tries in 10 tournaments, to rank third behind American Perry Baker (57) and England's Dan Norton (51).

Hard-nosed Mike Fuailefau and Lucas Hammond also made their mark last season. And McGrath points to Matt Mullins as one to watch.

"I'm very happy with the group we've got on paper," said McGrath. "It's a very very strong squad. If everybody stays fit and healthy, it will give me the luxury of having to work hard to pick a team, which is something I didn't have to do last year. It almost picked itself every time."

Veteran Phil Mack has left the sevens programs for the 15s.

Most of the players have been in training since June 25, with two blocks of six-week sessions already completed.

The 21 players centralized in Langford, B.C., feature 16 returnees from last year's squad. The roster has been augmented by the return of Connor Braid and Admir Cejvanovic from the 15s program as well as newcomers Jake Thiel and Andrew Coe.

Braid, Cejvanovic and Coe will split their duties amongst both sevens and 15s program.

After failing to qualify for the Rio Olympics, the men's sevens program lost its Own The Podium funding for the 2017-18 fiscal year. Sport Canada also reduced the number of carded athletes from 24 to 14 but Rugby Canada managed to increase that to 21 by having some players double up with the sevens and 15s teams.

While some developmental players have had to be left out, McGrath chooses to see the positives.

"It always seems to be doom and gloom with Canadian rugby but I've seen anything but," said the English-born coach. "The raw material's there, it's getting a chance to work with (it). There are players in this group and I'm sure further afield who are as good as anywhere else in the world.

"We may not have as many as everybody else but we've certainly got that level of quality. We should be looking at that as a real positive, because we've got some great players here."

Ahead of the World Series, McGrath's team will play in a warmup tournament — the Silicon Valley Sevens Nov. 4-5 in San Jose.