The latest news on COVID-19 developments in Canada 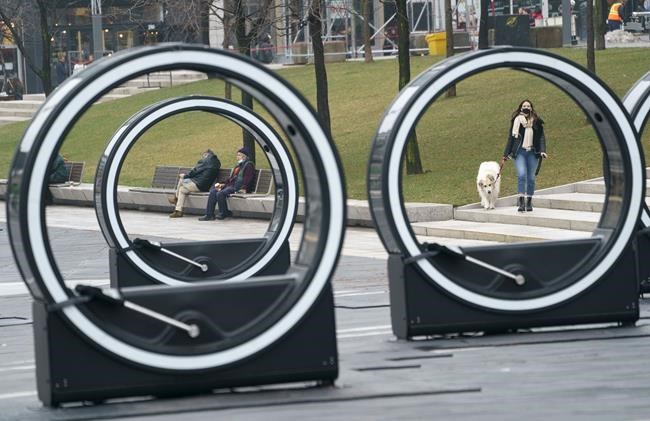 The latest news on COVID-19 developments in Canada (all times Eastern):

There are currently 20 active cases in Yukon.

The territory says in a news release that cases 48 and 49 have been linked to a previous case.

It also says there have been 10 additional deaths.

There are 504 people in hospital and 97 of those are in intensive care.

Premier Jason Kenney says he has appointed a group to plan the rollout of a COVID-19 vaccine expected to arrive in the new year.

Another dozen people have died in British Columbia after they became ill with COVID-19.

Provincial health officer Dr. Bonnie Henry says that has brought the death toll since the start of the pandemic in B.C. to 469 people.

Health Canada says a review of a COVID-19 vaccine approved for emergency use in the United Kingdom is expected to be completed soon.

Health Canada says its independent review of the vaccine is ongoing.

It says the review started Oct. 3.

Canada has a purchase deal to buy at least 20 million doses from Pfizer and the option to buy another 56 million.

The first four million are supposed to arrive between January and March.

Health officials say those who died were 60 and older and their deaths bring the province's death toll since the start of the pandemic to 53.

There are 132 people in hospital, with 26 people receiving intensive care.

Premier Scott Moe says although he expects high case numbers for weeks to come, he hopes community transmission rates will be lowered enough to loosen household gathering restrictions in time for Christmas.

The Moncton, Saint John, Fredericton and Edmundston regions each had one case, while there were two in the Bathurst region.

There are now 119 active cases in the province.

There has been a total of 514 cases and seven deaths since the pandemic began.

Almost half of the 106 intensive care beds being used in the province are occupied by people with COVID-19.

Nova Scotia is reporting 17 new cases of COVID-19, bringing its total of active cases to 127.

Sixteen are in the Halifax area, including a case at St. Margaret's Bay Elementary school that was reported late Tuesday.

Health officials say the remaining case reported today is in the northern health zone and is related to travel outside of Atlantic Canada.

The territory announced 11 new cases of COVID-19 today for a total of 80 active cases and 113 recovered.

Dr. Michael Patterson, Nunavut's chief public health officer, says cases will go up and down as his team continues to contact trace.

A two-week lockdown to slow the spread of COVID-19 lifted today in all communities except Arviat, which has 65 active cases.

There is one new case of COVID-19 in Newfoundland and Labrador.

Health officials say the new case is related to travel and involves a man between 20 and 39 years old in the eastern part of the province.

There have been 340 confirmed cases of COVID-19 in Newfoundland and Labrador since the onset of the pandemic.

The Health Department also reported 43 new deaths linked to the novel coronavirus, including nine in the past 24 hours.

The province's previous high for daily cases was reported Saturday, when the province hit 1,480 new cases.

Health Minister Christine Elliott says there are 500 new cases in Peel Region, 410 cases in Toronto, and 196 cases in York Region.

The province says it has conducted 44,226 tests since the last daily report.

In total, 656 people are hospitalized in Ontario due to COVID-19, including 183 in intensive care.

Quebec's deputy premier says that beginning Friday, stores and malls will have to enforce strict limits on the number of people allowed inside if they want to remain open.

Genevieve Guilbault says maximum capacity will be set according to a store's total surface area, and the allowable number of customers will be clearly posted.

Distancing and mask-wearing must also be enforced for customers waiting in line, and Guilbault says those not respecting the rules could be subject to fines of between $1,000 and $6,000.

Guilbault says the situation remains fragile in Quebec, hinting that COVID-19 numbers to be released later this morning will show that.

This report by The Canadian Press was first published Dec. 2, 2020.

Canadian military dealing with surge in new COVID-19 infections since December
Jan 27, 2021 9:23 AM