OTTAWA — The Royal Canadian Air Force's attempts to capitalize on the layoffs that have ravaged Canada's commercial airline industry during the COVID-19 pandemic have had some early — albeit extremely limited — success.
Sep 6, 2020 2:27 PM By: Canadian Press 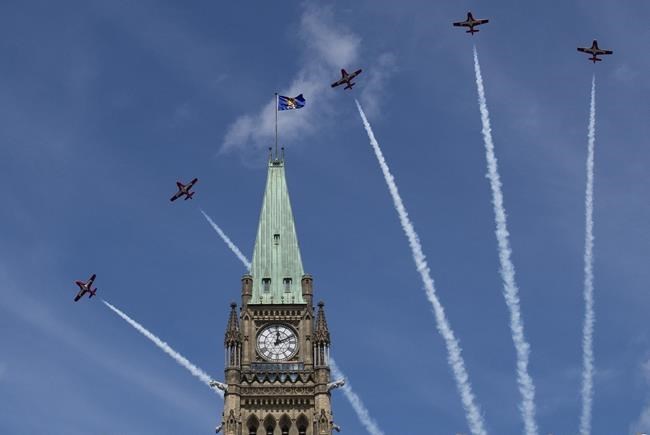 OTTAWA — The Royal Canadian Air Force's attempts to capitalize on the layoffs that have ravaged Canada's commercial airline industry during the COVID-19 pandemic have had some early — albeit extremely limited — success.

The military has for years been struggling with a shortage of experienced pilots that has led to something of an existential crisis for the Air Force, leaving severely strained commanders without enough veteran aviators to both train new recruits and lead missions in the air.

The federal government had started taking steps to try to lure some of those pilots back from the civilian aviation sector, where most had moved after leaving the Air Force, to address a shortfall that reached 275 pilots in December 2018.

Those efforts were redoubled with a social media campaign in March, after COVID-19 forced airlines to ground their planes and furlough hundreds of pilots for the foreseeable future, raising hopes some might opt to come back to the stability of the military.

The result: Four former military aviators have re-enrolled in the Air Force on a full-time basis, while five others have agreed to join as part-time reservists.

"The re-enrolment process involves a combined effort by the RCAF, the Canadian Forces Recruiting Group and various career managers, and is one that typically takes several months at minimum to complete," said Air Force spokeswoman Lt. Nora Amrane.

"This detailed process ensures the RCAF's staffing needs can benefit from returning valuable experience, that CAF enrolment standards are maintained ... and also that the re-enrollee's employment expectations/requests can be met."

Yet while any addition is no doubt welcome, Amrane said the military still needs 149 more aviators — even as she attributed much of the gain made from December 2018 to a reorganization that saw fewer pilots needed overall.

This reorganization saw the Air Force move several non-flying positions previously filled by pilots so trained aviators could focus on flying planes instead of flying desks.

"While the reduced requirement suggests the CAF is healthier with pilots, as people are transferred or recruited to fill these air operations officer positions, some pilots will still be required to complete the tasks over the next couple of years," Amrane added.

Amrane could not say whether attrition among its pilots had slowed since the pandemic, saying such statistics are not kept on a month-by-month basis.

The federal auditor general reported in November 2018 that the military didn't have enough pilots to fly Canada's CF-18 fighter jets. He also found that over a certain period when 40 fighter pilots left the Forces, only 30 new ones were trained.

The civilian commercial sector has been hit hard by COVID-19, with hundreds of pilots in Canada furloughed, including 700 at WestJet, which recently tightened its policies and protocols around the pandemic in a bid to get more customers to fly.

Ehren Cory appointed as new Canada Infrastructure Bank CEO
Oct 29, 2020 7:02 PM
Comments
We welcome your feedback and encourage you to share your thoughts. We ask that you be respectful of others and their points of view, refrain from personal attacks and stay on topic. To learn about our commenting policies and how we moderate, please read our Community Guidelines.