FREDERICTON — The jury in the Matthew Raymond murder trial in Fredericton was shown detailed and sometimes graphic pictures of the crime scene Tuesday.
Sep 29, 2020 12:07 PM By: Canadian Press 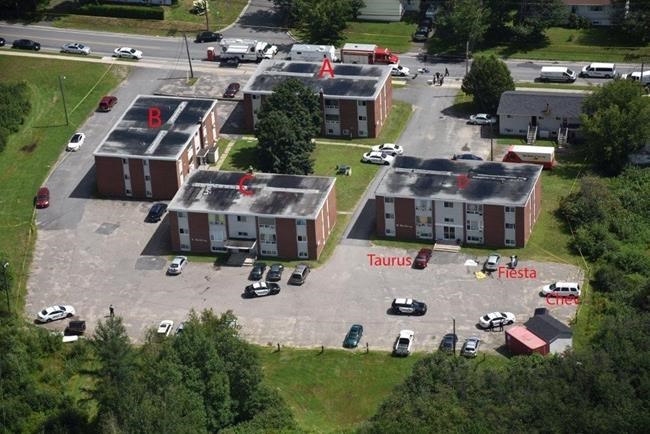 FREDERICTON — The jury in the Matthew Raymond murder trial in Fredericton was shown detailed and sometimes graphic pictures of the crime scene Tuesday.

Raymond is charged with four counts of first-degree murder in the shooting deaths of Donnie Robichaud, Bobbie Lee Wright and Fredericton police constables Robb Costello and Sara Burns in the parking lot of an apartment complex on Aug. 10, 2018.

Robichaud and Wright were killed while packing their car in preparation for a trip, while the two officers were killed when they responded to the scene.

RCMP Cpl. Chris Kean, the lead forensic officer, told the court he took pictures detailing the scene and evidence that was collected.

Some family members of the deceased were in the courtroom, and the Crown warned them during morning testimony that some of the pictures could be disturbing.

A number of the pictures showed the bodies of Robichaud and Costello on the pavement near a Ford Fiesta car and Wright in the front passenger seat of the vehicle.

Other pictures shown by Kean were of bullet holes and damage to the car and marks on the pavement where other bullets had struck.

Earlier, another RCMP forensics officer, Cpl. Francis Coutu, showed pictures of bullet damage to the windows and walls of a number of apartments in the four-building complex.

He detailed dozens of bullet impacts to both the outside of the buildings and inside, including apartment five in Building A and apartment 9 in Building B.

The defence has acknowledged Raymond killed the victims but says he should be found not criminally responsible because of a mental disorder.

On Tuesday afternoon, Kean showed a video and pictures he took of the inside of Raymond's apartment, C-11.

Among the items in the living room were a rifle on the floor and a shotgun on a couch. Shell casings and ammunition were found in both the living room and a storage room.

There were also documents and papers throughout the apartment, some of which had the words "serpent" and "hoax" on them, while others showed mathematical calculations featuring the numbers 666 and 33-1/3.

This report by The Canadian Press was first published Sept. 29,  2020.