OTTAWA — Cries of the pot calling the kettle black are emerging after Canada joined an international genocide lawsuit against Myanmar, because the national inquiry into missing and murdered Indigenous women and girls said Canada's Indigenous Peoples
Sep 6, 2020 6:00 AM By: Canadian Press 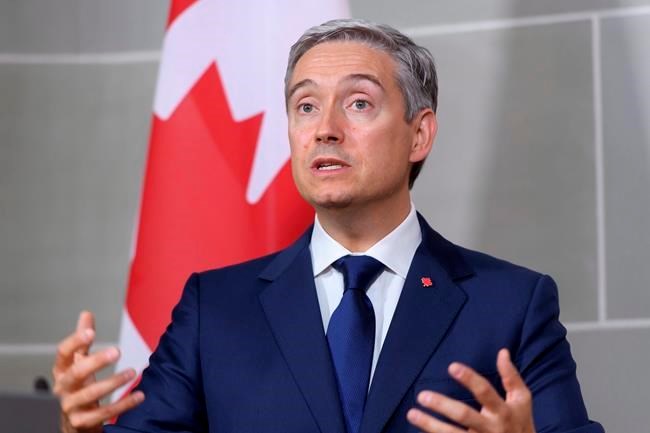 OTTAWA — Cries of the pot calling the kettle black are emerging after Canada joined an international genocide lawsuit against Myanmar, because the national inquiry into missing and murdered Indigenous women and girls said Canada's Indigenous Peoples are genocide victims.

Canada and the Netherlands announced with great fanfare this week that they were joining the genocide application launched by Gambia against Myanmar at the International Court of Justice in The Hague as interveners.

Gambia filed the case last fall on behalf of the 57 Muslim countries in the Organization of Islamic Co-operation under the 1948 Genocide Convention.

More than 850,000 Rohingya Muslims have fled Rakhine state after being targeted by Myanmar security forces, who killed thousands while burning villages and engaging in ethnic cleansing and gang rape.

Foreign Affairs Minister Francois-Philippe Champagne and his Dutch counterpart Stef Blok said their countries were joining the case to assist Gambia with "complex legal issues" in the case.

But Bruno Gelinas-Faucher, a University of Montreal international law expert who has worked at the ICJ, said Canada's presence could cause delays and complications for the Gambian case because of an international legal axiom known as the "clean-hand" principle.

"There's a risk for Canada to be perceived as adopting a contradictory position of leading a very active foreign policy based on prevention of genocide abroad, and at home, not responding to fully for the calls for justice made by the (inquiry)," said Gelinas-Faucher.

"I think there is a very important element for Canada not to be seen as putting forth this contradictory position in the world, and to be coherent — have a coherent foreign policy that is in line with its domestic policy as well."

Gelinas-Faucher said it is likely Myanmar will raise the Canadian genocide finding in legal arguments that would seek to block Canada from gaining standing in the case. He said that could further brake the already slow-moving wheels of the international court and delay the case for as much as a year.

In June 2019, the landmark Canadian report on the victimizing of Indigenous women issued more than 200 recommendations and declared that violence against First Nations, Metis and Inuit women and girls was a form of genocide as that the crisis was "centuries in the making."

Champagne said in an interview that he's not concerned about Canada's position on Indigenous issues at home, and that he is content to let "legal experts debate legal issues."

"This is not about Canada. This is about genocide committed in Myanmar, and therefore I think Canada has every right to be standing side by side with a country like The Gambia, which is taking the leadership position and being supported by countries like the Netherlands and Canada," Champagne said.

Another leading international legal expert said Canada has little to worry about, and that it should be joining the case against Myanmar.

Errol Mendes, a University of Ottawa international law specialist who has served as a United Nations adviser, said there is much to distinguish Canada from Myanmar on the question of genocide.

"I hope our many attempts to reconcile with our Indigenous Peoples will set us apart from the type of actions in Myanmar that we have not seen since the Nazi regime, the Rwanda genocide and the Bosnian genocide," said Mendes.

"We are far from angels, but hopefully we are not in the same league of those that were involved in these genocides."

Canada also brings a lot of international expertise to the case because it helped create the Rome Statute that established the International Criminal Court, said Mendes.

"We helped develop the Statute of the Court that includes express provisions on gender violence and rape as indicia of genocide," said Mendes, which he said is relevant in the case against Myanmar at the separate International Court of Justice because of the allegations of sexual violence against its military.

Gelinas-Faucher said Canada's feminist foreign policy does leave it well-suited to add value to the case against Myanmar. But the government will have to take concrete action to address the domestic genocide allegations contained in last year's inquiry report.

Champagne said Canada is consulting with Gambia and believes its feminist foreign policy has a role to play in the case.

"We've seen acts of genocide, systemic murder, sexual violence, torture," the minister said. "The international community is more seized now than ever with the plight of the Rohingya."