Donors' conference for Venezuelan refugees hosted by Canada aims to raise $1.44B 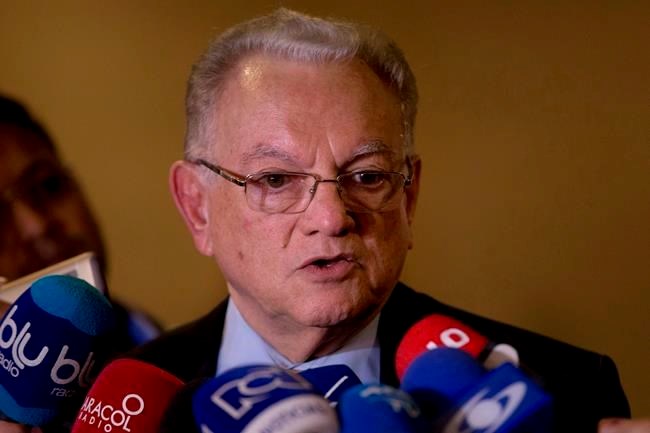 Michael Grant told a virtual news conference Friday the world should provide sufficient support to countries in South and Central America and the Caribbean that have offered shelter, health care, education, and safety to Venezuelan refugees.

"The Venezuelan refugee and migrant crisis is a tragedy, which requires action," Grant said.

He said the crisis is the largest the Western Hemisphere has ever seen, and the second largest in the world after the exodus from Syria, but it is not getting nearly the visibility it deserves.

Over half of Venezuelan refugees don't have enough to eat and 80 to 90 per cent of them have lost their source of income, said Grant.

"The facts for Venezuelan refugees and migrants are stark," Grant said. "One in four children are separated from their families during the journey. And women and girls experienced particularly challenges such as gender-based violence and lack of access to sexual and reproductive health services."

Eduardo Stein, representative for Venezuela of the United Nations High Commissioner for Refugees and the International Organization for Immigration, said the COVID-19 pandemic has exacerbated the dire conditions in which Venezuelan refugees live in 17 countries.

"The burden should not fall on countries in the region alone," he said.

"Addressing displacement requires a global and inclusive partnership where solidarity and responsibility are shared by the entire international community along host countries in the region."

He said a total of $1.44 billion is needed to implement a plan that was put together by 159 organizations across the countries that host refugees and migrants from Venezuela.

Stein said prolonged lockdowns, loss of livelihoods and increased poverty are forcing many to depend on emergency humanitarian assistance to survive.

Grant said Canada is optimistic to see new donors come to the table during the donors' conference on June 17, but he didn't say how much money Canada will contribute.

"Last year, only half the total funding requirements were met," he said.

Grant said the donors' conference aims to mobilize additional resources, including through multilateral institutions such as the World Bank and the Inter-American Development Bank, and ensure that attention is maintained.

He said Canada currently doesn't have a separate program to resettle Venezuelan refugees, but it will continue to work with the UNHCR and other organizations to respond to referrals of refugees who are in need for resettlement.

Canada resettled only 15 refugees from Venezuela between January 2015 and April 2021, according the government data.

Stein said the plan put forward by the organizations that serve Venezuelan refugees underscores the need for a shift from the focus on basic humanitarian, urgent needs to the need for socio-economic integration of Venezuelans in the 17 countries that host them.

"The integration process demands the regularization of their legal identities and papers, and all of the countries are undertaking with enormous efforts this documentation side of the process," he said.

"What we are trying to help governments achieve as well is how to prevent Venezuelan refugees and migrants from using irregular paths (for immigration) and falling in the hands of people who exploit them."

H said up to 2,000 Venezuelan continue to leave their home country daily despite the closing of the regular border crossing between Venezuela and its neighbouring countries.

"The situation is, indeed, in need of international attention."

This report by The Canadian Press was first published June 11, 2021.

This story was produced with the financial assistance of the Facebook and Canadian Press News Fellowship.