OTTAWA — The Canadian legal team for an imprisoned Iranian human-rights lawyer is calling for federal sanctions and United Nations intervention as she wages a life-threatening hunger strike entering its 29th day.
Sep 8, 2020 6:03 PM By: Canadian Press 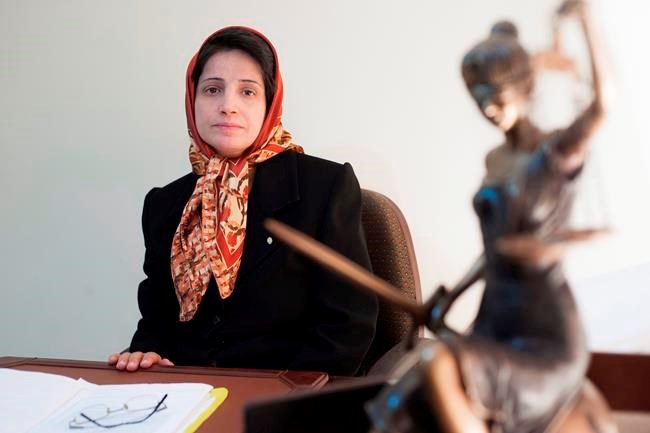 OTTAWA — The Canadian legal team for an imprisoned Iranian human-rights lawyer is calling for federal sanctions and United Nations intervention as she wages a life-threatening hunger strike entering its 29th day.

Nasrin Sotoudeh was hospitalized briefly on Monday in Tehran but has since been returned to the women's ward of the notorious Evin Prison, where she has been held since June 2018, said Yonah Diamond, one of her Montreal-based lawyers.

Sotoudeh, 57, has lost at least 15 pounds and is suffering from unstable blood pressure, memory loss, migraines, vomiting and dehydration, and Diamond says that while she is determined to carry on her fight, her life is very much at risk.

"Nasrin's actions are entirely devoted to the integrity and respect for the rule of law, Iranian law, and the release of political prisoners," said Diamond. "She reached an impasse and had to resort to a hunger strike because the authorities ignored their appeals for legal remedies."

Sotoudeh's legal team is being led by former Canadian justice minister Irwin Cotler, the founder of the Raoul Wallenberg Centre for Human Rights in Montreal. The lawyers have petitioned the UN Working Group on Arbitrary Detention and other UN experts to take action to save her life.

Canada's foreign ministry did not respond to a request for comment.

Cotler calls Sotoudeh the "Mandela of Iran" because of her outspoken advocacy for female inmates, young people and journalists and her opposition to the death penalty.

Sotoudeh was sentenced to 38 years in prison and 148 lashes in March 2019, a sentence she continues to serve despite Iran's release of scores of prisoners due to overcrowded prisons that are now breeding grounds for COVID-19.

One of Sotoudeh's highest-profile clients — the Iranian women's rights activist Shaparak Shajarizadeh — said she spoke to Sotoudeh's husband on Monday and that he passed on a message of defiance to her supporters.

"She said she thanked all the people from around the world, fellow lawyers and human-rights activists who ask her to stop her hunger strike," said Shajarizadeh, who fled Iran in 2018 and now lives in Toronto as an asylum-seeker. "She intends to continue right now because so far the authorities have been ignorant to her."

Shajarizadeh described the diminutive Sotoudeh as tower of strength, something she saw first-hand when she represented Shajarizadeh in a Tehran courtroom in 2018. Shajarizadeh had been arrested for protesting the law requiring women to wear head coverings, when Sotoudeh strode into court to defend her.

"She's a small woman, but the strength and her strong character for me, in that time it was like a pillar; it was getting nutrition in that time," Shajarizadeh said.

"When I hear, she says, 'I'm not going to stop my hunger strike, right now,' I believe it. I saw it myself. She's a strong woman and she knows her strength and ability, and she uses this potential to fight the brutality of the regime, and the judges."

Diamond said Sotoudeh is also being pressured by efforts from Iranian authorities by targeting her family. They have arrested her husband and daughter and frozen her bank accounts.

Sotoudeh ran afoul of authorities because she opposed a new Iranian law that allowed only a handful of government-picked lawyers to represent accused people in national-security cases or politically sensitive prosecutions.

Shajarizadeh said she blamed herself for Sotoudeh's arrest, which came shortly after she fled to Turkey on her way to Canada.

"Then I talked to her husband and he said it wasn't my fault. She was planning a campaign against the new law," she said.

Last year, more than three dozen Canadian parliamentarians, senators and MPs from all political stripes signed a letter of support for Sotoudeh after her sentence was imposed.

"As the Parliament of Canada, we stand in solidarity with the international community, including the European Parliament and the United Nations Office of the High Commissioner, and call on the government of Iran to release Nasrin Sotoudeh and other political prisoners who have been unjustly imprisoned," said the April 2019 letter.

In 2010, Cotler represented Sotoudeh when he was an MP, and helped win her release from an Iranian jail.

This report by The Canadian Press was first published Sept. 8, 2020.

Indigenous-led clinic to help Quebec community still shaken by Joyce Echaquan's death
Oct 27, 2020 4:00 AM
Testimony to continue today in extradition case of Huawei executive Meng Wanzhou
Oct 27, 2020 4:00 AM
Comments
We welcome your feedback and encourage you to share your thoughts. We ask that you be respectful of others and their points of view, refrain from personal attacks and stay on topic. To learn about our commenting policies and how we moderate, please read our Community Guidelines.