NHLers reflect on league pause: 'All of a sudden someone turns the car off'

Josh Morrissey figures he has more close friends on the Edmonton Oilers than any other rival NHL team.
0
Apr 8, 2020 3:15 PM By: Canadian Press 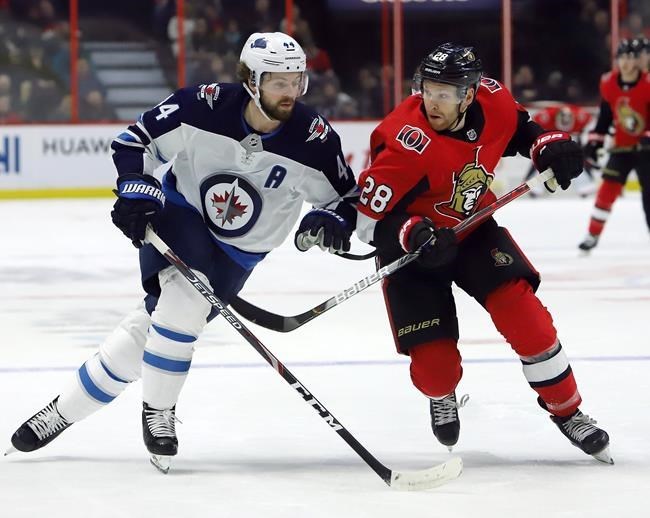 Josh Morrissey figures he has more close friends on the Edmonton Oilers than any other rival NHL team.

It led to some unusual heat-of-the-moment conversations for the Winnipeg defenceman the night of March 11, after news broke during the Jets' game at Rogers Place that the NBA was suspending its season in the wake of Utah Jazz star Rudy Gobert's positive test for COVID-19.

In the heat of a playoff race, uncertainty was in the air.

One thing, however, seemed crystal clear.

"We saw the writing on the wall," Morrissey recalled this week of the on-ice conversations between whistles. "That was probably our last game."

At least in the short- and medium-term, they were right.

The NHL, along with most sports in North America, paused its schedule less than 24 hours later amid the widening novel coronavirus outbreak.

Thursday marks four weeks since the league shuttered operations, and it remains anyone's guess when society — which has ground to a halt in an era of mass job losses, self-isolation and social distancing — will return to some semblance of normal and games are allowed to resume.

Oilers blue-liner Darnell Nurse said there was chatter before the meeting with Winnipeg about the NBA, but it still didn't seem real until he learned of basketball's unprecedented decision to suspend play.

"We share arenas and travel to the same cities, stay in the same hotels," he said. "It's hard for them to shut down and us to justify being out there on the ice and putting our fans in the same environment. It was a tough day, tough night. You're so invested at that point. You're playing every other day. You're on autopilot.

"Then all of a sudden someone turns the car off."

Nurse added that while the pause remains disappointing, it quickly became clear the situation was so much bigger than hockey.

"This virus, it gives a really big reality check as a player, as a human being, as a person," he said. "You're worried about not just yourself, but your family and keeping everyone safe."

Carolina Hurricanes centre Jordan Staal was at dinner with teammates that now-infamous Wednesday ahead of their game in New Jersey the following night when the NBA pulled the plug.

"I'm like, 'There's no way we're gonna stop playing,'" Staal remembers saying. "Next thing you know (a basketball player) has it and that's it."

The Pittsburgh Penguins were supposed to battle the Blue Jackets in Columbus without fans that Thursday after officials in Ohio banned large gatherings.

"Your first impression is, 'This is pretty serious and we've got to take this serious right away,'" Penguins captain Sidney Crosby said. "That kind of hit me."

That game, and 188 more scheduled through the end of the regular season, didn't go ahead. The Stanley Cup playoffs, which were supposed to start Wednesday, are on indefinite hold as well.

Toronto Maple Leafs defenceman Morgan Rielly, who was preparing to take on Nashville at the time of the pause, said his view of the pandemic that's now killed thousands and infected many more worldwide has changed with time.

"You try to just put your finger on what's happening, and then you get told to go home. It became pretty real that morning," he said. "You go out for groceries, and you realize that you have to get to the grocery store early enough in the morning so you can actually pick something. It becomes that much more real then, too.

Devils defenceman P.K. Subban said he was prepared for the schedule to be halted even though it was tough to swallow.

"It was pretty sudden and abrupt," he said. "It didn't really catch everybody off guard, but that's when it started to set in how serious it was.

"Just weird to see the world kind of stop."

Florida Panthers goalie Sergei Bobrovsky was on the phone with his agent the night before their game in Dallas.

"It creeped into my mind that it's a crazy time," he said. "Unbelievable and crazy."

Canucks forward J.T. Miller said Vancouver's players made the most of the down time prior to their flight home after learning the club's game in Arizona was called off.

"Played some golf," he said. "We went to local course for a couple hours, played a couple holes and got back to the bus."

Back to that Wednesday night before the pause, Morrissey said the Jets knew they were sitting out of the playoff picture in the Western Conference, and those two points up for grabs in Edmonton could be crucial with so many unknowns.

"You start thinking about different scenarios," he said. "You never know what's going to happen going forward if you don't get to play any more regular-season games and they're trying to determine the playoffs.

"It was a really weird feeling."

Winnipeg pulled off a 4-2 comeback victory to move into the first wild-card spot, although the Jets sit below the cut line when it comes to points percentage, which could wind up as the determining factor if no more regular-season games are played.

"You're thinking about the health and safety of your family, your friends, your loved ones ... just the craziness going on," Morrissey said. "Basically from the start of the second period until probably another three, four days, things were always up in the air."

Unfortunately, not much has changed.

NHL unveils further details on its return-to-play plan
Jun 4, 2020 4:12 PM
Comments
We welcome your feedback and encourage you to share your thoughts. We ask that you be respectful of others and their points of view, refrain from personal attacks and stay on topic. To learn about our commenting policies and how we moderate, please read our Community Guidelines.