PHILADELPHIA — T.J. Oshie and Evgeny Kuznetsov scored in a shootout to lift the Washington Capitals over the Philadelphia Flyers 2-1 on Wednesday night.
Nov 14, 2019 1:16 AM By: Canadian Press 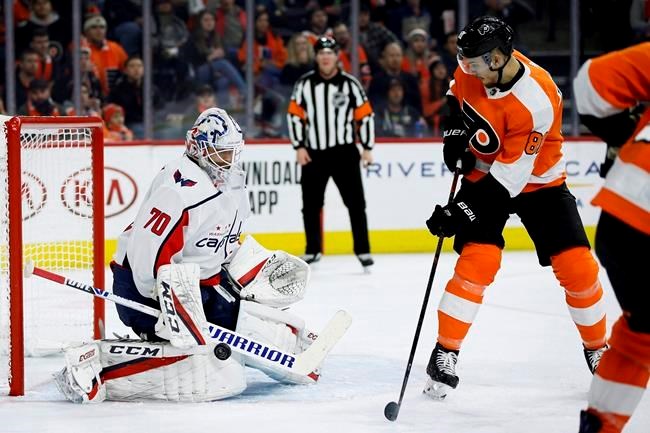 PHILADELPHIA — T.J. Oshie and Evgeny Kuznetsov scored in a shootout to lift the Washington Capitals over the Philadelphia Flyers 2-1 on Wednesday night.

Brendan Leipsic had a goal in the first period and Braden Holtby made 30 saves for the Capitals, who extended their point streak to 13 games (11-0-2) and increased their NHL-best total to 32 points.

Claude Giroux scored a power-play goal in the third period for the Flyers (10-5-3), who had won four straight. Philadelphia has earned at least one point in seven consecutive games (5-0-2).

Carter Hart had 35 saves, including several late highlight-reel stops, but the 21-year-old netminder couldn’t stop either Washington attempt in the shootout.

Semyon Varlamov made 23 saves and the Islanders earned a point for the 13th straight game (12-0-1). Mathew Barzal had a goal and an assist.

Kasperi Kapanen, William Nylander, Justin Holl and John Tavares scored for Toronto in its third straight loss. Frederik Andersen had 25 saves in the Maple Leafs’ second game since losing Mitchell Marner for at least four weeks due to a high ankle sprain.

NEWARK, N.J. (AP) — Jean-Gabriel Pageau scored a hat track, including the go-ahead goal with 2:01 to play, and Ottawa rallied in the third period to beat New Jersey.

Mark Borowiechi tied the game with 6:30 to go, and Pageau got the winner when he put the rebound of a shot off the post by Nick Paul into an open net. Pageau finished off his first regular-season hat trick with 26 seconds left on a shot into an empty net. He has eight goals in his last six games.

Craig Anderson made 21 saves for the Senators, including a breakaway stop on Taylor Hall midway through the third period with the Devils ahead 2-1.

Will Butcher and Wayne Simmonds scored for New Jersey, which returned from a five-game road trip. Mackenzie Blackwood stopped 21 shots.

Patrick Kane, Calvin de Haan, Kirby Dach and Dylan Strome also scored for the Blackhawks. Crawford, who improved to 2-0-2 in his last four games, entered 0-3-0 versus Vegas with a 5.38 goals-against average and .859 save percentage.

William Carrier, William Karlsson and Nate Schmidt scored for the Golden Knights against a team they'd dominated since entering the NHL in 2017. Marc-Andre Fleury stopped 21 shots.

Calgary native Justin Dowling's first NHL goal was the winner for Dallas, which is 8-1-1 after stumbling to a 1-7-1 start this season. Ben Bishop made 24 saves.

Ruff hired as NJ Devils coach, Fitzgerald stays on as GM
Jul 9, 2020 3:46 PM
Comments
We welcome your feedback and encourage you to share your thoughts. We ask that you be respectful of others and their points of view, refrain from personal attacks and stay on topic. To learn about our commenting policies and how we moderate, please read our Community Guidelines.