EDMONTON — Aware of how much back-to-back losses could devastate their playoff hopes, the Calgary Flames wrested momentum back in their series with the Winnipeg Jets with a 6-2 win Tuesday. The Flames lead the best-of-five qualifying series 2-1.
Aug 4, 2020 11:40 PM By: Canadian Press 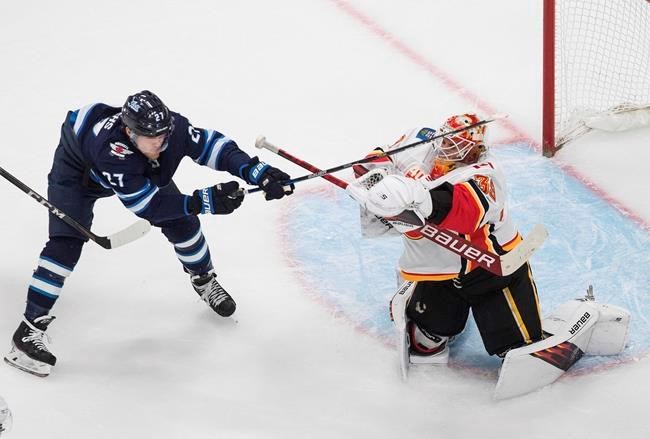 EDMONTON — Aware of how much back-to-back losses could devastate their playoff hopes, the Calgary Flames wrested momentum back in their series with the Winnipeg Jets with a 6-2 win Tuesday.

The Flames lead the best-of-five qualifying series 2-1. Game 4 is Thursday.

Calgary is a victory away from dispatching the Jets and advancing to the first round of an NHL post-season like no other because of the COVID-19 pandemic.

"We have a chance to close it out on Thursday and we’re going to prepare as much as we can to make sure that happens,” Flames forward Matthew Tkachuk said.

Sean Monahan led Calgary's attack with a goal and two assists. Elias Lindholm and Mikael Backlund each scored and had an assist.

Tkachuk and Milan Lucic also scored, and Johnny Gaudreau produced an empty-netter to go along with a helper. Andrew Mangiapane had a pair of assists.

Nikolaj Ehlers and Andrew Copp scored for the Jets.

Winnipeg counterpart Connor Hellebuyck stopped 26 in the loss. The Vezina Trophy nominee wasn't on his game-stealing form of the regular season.

"I’ve got to use this and I plan on using this," the Jets goalie said. "This was an upset for me.

"I don’t see it being easy for them at all for the rest of the series. So they better scratch and claw for everything that they get.”

The Flames were the Western Conference's top seed heading into the 2019 playoffs.

Calgary beat the Colorado Avalanche in the first game of the first round, but didn't win again en route to a quick exit.

The sting stayed with the Flames throughout the 2019-20 season. Tuesday's resounding victory after a loss the previous day arrested a potential skid.

"It’s all about momentum and we had to get it back," Tkachuk said. "Last year, we didn’t get the momentum back."

Both teams playing their second game in as many days, and third in four days, Calgary took control with a three-goal second period.

The Flames scored a pair of power-play goals to take Game 1, but were blanked on six chances Monday.

"I thought our players did a really good job in terms of just being more prepared for what we were going to see," Ward said.

"We were able to put ourselves in positions where we were able to beat pressure better than we did in the last game. Obviously it was a huge factor in the hockey game."

Scheifele hasn't played since the first period of Saturday's opener. He injured his left leg tangling along the boards with Tkachuk.

Attrition continued for the Jets on Tuesday. Forward Mathieu Perreault went to the dressing room in the second period and did not return. He was checked hard by Sam Bennett near Calgary's bench.

Defenceman Tucker Poolman missed the majority of the second period. He leaked blood onto the ice after taking a Backlund shot off his head.

Poolman was back on the bench to start the third, however, wearing a cage until switching to a full shield.

Jets head coach Paul Maurice estimated the welt on Poolman's head to be the size of five golf balls.

Hellebuyck was pulled with four and a half minutes to play in a bid for extra-attacker goals, but the Jets didn't generate any.

“We’re not coming to the rink for Game 4 with a feeling that we’ve let something slip away," Maurice said.

"We're not moving the puck the way we want to for sure, but if there’s one thing I have confidence in, I think the compete’s going to be as good as we’ve got.

"What they leave on the ice in Game 4 will be all they have.”

This report by The Canadian Press was first published on August 4, 2020.

Bubble hockey champs: Tampa Bay Lightning beat Dallas Stars 2-0, win Stanley Cup
Sep 29, 2020 12:43 AM
Blackhawks acquire Pirri in trade with Golden Knights
Sep 28, 2020 7:26 PM
Canadiens sign forward Jake Lucchini to one-year, two-way contract
Sep 28, 2020 4:57 PM
Comments
We welcome your feedback and encourage you to share your thoughts. We ask that you be respectful of others and their points of view, refrain from personal attacks and stay on topic. To learn about our commenting policies and how we moderate, please read our Community Guidelines.