MONTREAL — Air Canada plans to rehire 16,500 laid-off workers via Ottawa's emergency wage subsidy, though the vast majority will remain at home amid the collapse of global travel triggered by the COVID-19 pandemic.
0
Apr 8, 2020 5:25 PM By: Canadian Press 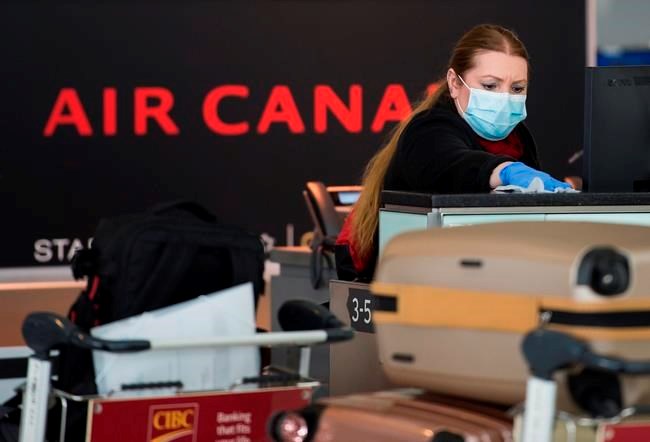 MONTREAL — Air Canada plans to rehire 16,500 laid-off workers via Ottawa's emergency wage subsidy, though the vast majority will remain at home amid the collapse of global travel triggered by the COVID-19 pandemic.

The company said Wednesday it will apply for the Canada Emergency Wage Subsidy to retain or bring back workers who were let go under a cost reduction program that saw nearly half of Air Canada's 36,000 employees lose their jobs as air traffic skidded to a halt due to the virus.

"While our seat capacity and operations have decreased by more than 90 per cent overnight, we are trying to keep as many of our employees as possible during the crisis and this measure will certainly help," CEO Calin Rovinescu said in a release Wednesday.

Depending on wage levels, many employees will receive more under the $71-billion federal wage subsidy than they would from employment insurance, and would maintain their health insurance and other benefits, Air Canada said.

The union representing Air Canada flight attendants confirmed that its 6,800 recently furloughed members would be able to come back on the payroll but not on "active duty," since most routes are now cancelled.

"This would be an important piece of relief for our members who have endured some very difficult times over the past several months," said Wesley Lesosky, who heads the Air Canada Component of the Canadian Union of Public Employees (CUPE), in a statement. "They are due for a little bit of good news."

However, union members making minimum wage or close to it might opt to stay on no-pay, off-duty status, which would allow them to apply for the Canada Emergency Response Benefit (CERB) for people who've lost their jobs.

"Some may elect to take the CERB since it would offer them a greater benefit," CUPE spokesman Hugh Pouliot said in an email.

Under the wage subsidy program, workers are paid 75 per cent of normal hourly wages or up to $847 per week. The emergency response program, on the other hand, offers $500 per week to unemployed Canadians.

A furloughed worker returning to a 40-hour-per-week post at minimum wage— $14 per hour in Ontario, the second-highest in the country — would make $420 per week under the wage subsidy. That's 16 per cent less than the cheque they would receive under the CERB program for newly laid-off Canadians.

A worker earning $17 per hour would take home $10 more per week than their unemployed counterparts.

"The agreement is for our members to remain on the Air Canada payroll but to stay home," said Keith Aiken, a spokesman for the International Association of Machinists and Aerospace Workers. But some members may wish to apply for the emergency response benefit, he added.

Air Canada said March revenue fell by more than 30 per cent year-over-year — the initial threshold to qualify for the wage subsidy — and expects cash inflow to remain below that mark throughout the program term. Prime Minister Justin Trudeau pledged Wednesday to relax the rules, saying businesses will have now to show a 15 per cent revenue decline for March.

The Montreal-based airline said rehired employees will benefit from the subsidy for the length of the program — currently slated to last for up to 12 weeks, retroactive to March 15 — or until they can resume their usual duties, whichever comes first.

The layoffs of 15,200 unionized workers and 1,300 managers went into effect last Friday and were initially slated to last through May.

International passenger arrivals at Canadian airports decreased by 96 per cent year over year for the week starting March 30, despite thousands of travellers returning home on repatriation flights, according to the Canada Border Services Agency.

More than 18,000 employees at Canadian airlines have lost their jobs over the past three weeks, not including Air Canada workers.

Edmonton-based Flair Airlines said Wednesday it will rehire all 130 laid-off workers and return all 332 employees to full wage thanks largely to the federal subsidy, CEO Jim Scott said.

"They’re the ones that have to face the stress," Scott said in a phone interview. "The idea was to keep the money in the community, because letting pay go down 25 per cent, it really wouldn't be in the spirit of the program."

Montreal-based Transat AT Inc., which has halted all flights and temporarily laid off 4,000 employees — mainly flight attendants — says it hopes to use the subsidy to recall all of its workers, who would likely remain at home at a 75 per cent wage.

"As Transat has suspended its entire operations, we will not be in a position to provide work to most of the employees who would benefit from the (wage subsidy), nor to top up the compensation granted in the program," said spokesman Christophe Hennebelle.

Airlines including Porter and Sunwing say they are assessing the program and awaiting further details from Ottawa before possibly applying.

In addition to the temporary workforce reductions, Air Canada announced March 31 that Rovinescu and chief financial officer Michael Rousseau would forgo their salary for three months. Rovinescu received $11.5 million in total compensation in 2018 and $9 million in 2017.

Senior executives will also forgo between 25 and 50 per cent of their salaries while members of Air Canada's board have agreed to a 25 per cent reduction. All other Air Canada managers will have their salaries reduced 10 per cent for the second quarter.

Companies in this story: (TSX:AC, TSX:TRZ)

Airline stocks soar as American, United add back flights
Jun 4, 2020 6:48 PM
VMedia launches live, on-demand streaming TV service
Jun 4, 2020 6:08 PM
Comments
We welcome your feedback and encourage you to share your thoughts. We ask that you be respectful of others and their points of view, refrain from personal attacks and stay on topic. To learn about our commenting policies and how we moderate, please read our Community Guidelines.