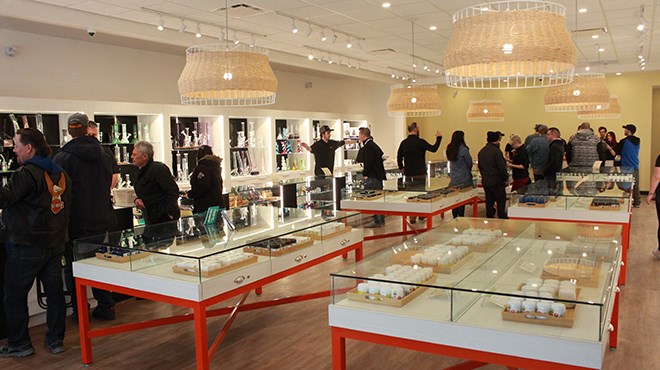 On Saturday morning, Greater Sudbury opened the doors to its first legal cannabis dispensary, Canna Cabana, one of two stores to be introduced in northern Ontario under the Alcohol and Gaming Commission of Ontario.

If you hadn't heard the news, you may have smelled the barbecue, hosted until this evening along with music from DJ Booma as part of Canna Cabana's official grand-opening block party. Doors to the dispensary – located at 2019 Long Lake Rd., Unit B – opened about a half-hour later than expected, around 9:30 a.m., but that didn't stop people from taking their place in line as early as 7 a.m.

Two police officers have been stationed outside of the dispensary for the day, directing traffic and ensuring that the crowd, which had wrapped itself around the side and back of the four-corner dispensary, can shop safely.

Delayed by provincial licensing, the dispensary opens its doors 20 days after the government-regulated date of April 1, a setback that has cost owners' a $12,500 fine. The dispensary may also be penalized an additional $12,500 for not having opened before April 15.

At this point, Highlife Dispensary on Marcus Drive has yet to receive its provincial licence.

Sudbury's Canna Cabana, along with 23 locations to be opened or that have opened across Ontario, is owned by the parent company High Tide Inc., an Alberta-based, retail-focused cannabis corporation that, in addition to selling cannabis at the majority of its locations, manufacturers and distributes smoking accessories as well as cannabis lifestyle products.

A number of these products are showcased in the display cases of Sudbury's Canna Cabana, neatly lined on either side of the 2,200-square-foot store.

"We're so happy to look at people's faces when they come into the store," said Michael Hogewoning, one of the four partners who own the location.

"With all the LED lights and the glittering glassware – it's a clean, safe atmosphere like an Apple store ... it's not a TV dispensary where it's a dark, dingy corner where you slip the guy some cash."

Rather than having their product behind a counter, Canna Cabana has chosen to display it in glass cases throughout the centre of the store. This island set-up allows customers to peruse items at their leisure, reading the additional information included with each cannabis product that outlines the components of that particular strand and the effects it is likely to have on users.

Sudbury's Canna Cabana has an estimated 70 strains in house at this time, not including its CBD products, with a pretty even balance between indica, sativa and hybrid product.

"Sativa tends to be used by more creative people, people that are looking for energy to get by – more for morning/afternoon use," said Huter, "whereas indica tends to be stronger, so people use that more in the evening to help sleep ... It's usually used by people who are looking for something that puts them 'in da couch.'"

Cannabis product is sourced through the Ontario Cannabis Store, the only distributor available to cannabis retailers. The product arrives pre-packaged and can be purchased in one-, 3.5- or seven-gram quantities, with one-gram and half-gram quantities offered for pre-rolled joints. While there is no loose product in-store, Canna Cabana is looking to install 'smell stations' so customers may interact with the product prior to purchase.

Canna Cabana sales associates are the only individuals allowed to handle the cannabis product until it is purchased by the customer and they are available for any questions a customer may have regarding the product.

"We lucked out huge with the staff," said Hogewoning. "They're very social people, lots of retail experience and enjoy everything about the product and the market."

"They're so stoked and full of energy that we have to tell them to go home at the end of the night … It's like kids at Christmas," he added.

But they aren’t the only ones excited about the grand opening, said Hogewoning.

"One hundred years of prohibition coming off is a big deal everywhere and we're just amazed at the response we're getting, whether it’s going to the bank, checking into the hotel, or just talking to people over the years — they're just ecstatic that a pot store is opening up."

While Hogewoning and his partners are well aware of the stigma they face, he believes the dispensary "is going to bring a lot of happiness to the people."

"It's good for everybody. Everybody wins."

A graduate of both Laurentian University and Cambrian College, Keira Ferguson is a Local Journalism Initiative reporter, funded by the Government of Canada, at Sudbury.com.
Read more

COVID-19: 8 million Canadians rethinking retirement due to pandemic, report suggests
Aug 9, 2020 9:25 AM
Comments
We welcome your feedback and encourage you to share your thoughts. We ask that you be respectful of others and their points of view, refrain from personal attacks and stay on topic. To learn about our commenting policies and how we moderate, please read our Community Guidelines.