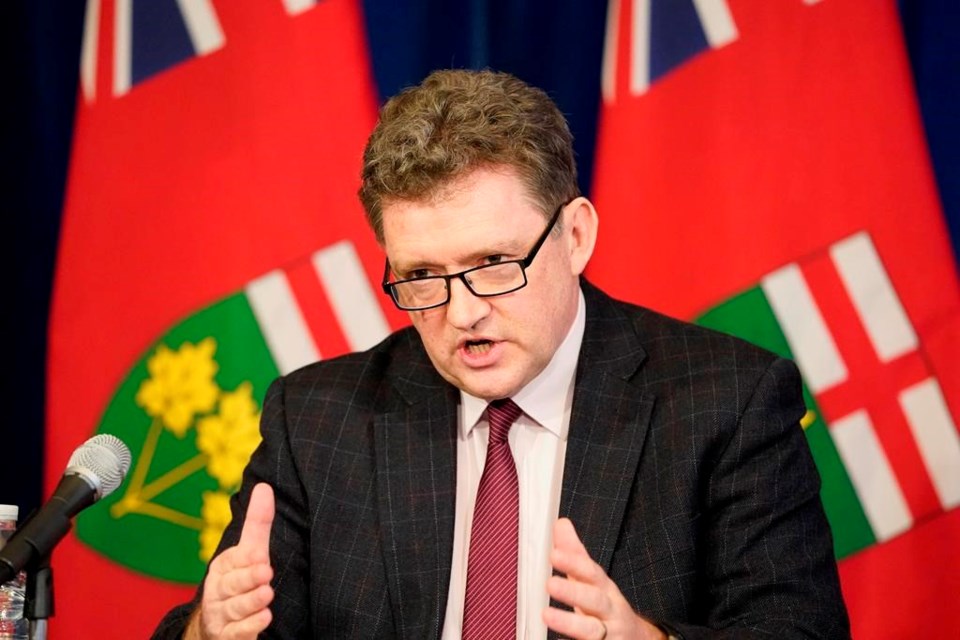 TORONTO — Premier Doug Ford moved swiftly to shutter a larger swath of Ontario's economy on Friday in the wake of bleak projections about the death toll of the COVID-19 pandemic.

Shortly after the release of numbers showing 1,600 people could die by month's end without more aggressive physical distancing measures, Ford announced a significantly pared-down list of essential services allowed to remain open. Those that did not make the cut must suspend operations by Saturday night at 11:59 p.m.

The new closures, which will be in effect for at least 14 days, include all industrial construction sites except for those on projects considered essential, such as hospitals. `

The shutdown followed recommendations by some of Ontario's top public health officials, who revealed projections earlier in the day illustrating the effects of the government's measures to date.

The projections showed that up to 100,000 people in the province could have died over the full course of the pandemic without the widespread closures of schools and businesses the province enacted last month.

As it is, the figures suggested the death toll could reach anywhere from 3,000 to 15,000 without additional protective efforts.

Ford said the data, grim in and of itself, still offers a message of hope.

"The numbers clearly show that we collectively have saved thousands of lives," Ford said. "But we also know that we can't stop now. There are 1,600 people that need us to do everything we can in the next 30 days."

Dr. Peter Donnelly, president of Public Health Ontario, said the data paint a stark picture of the gravity of the situation facing Ontario residents and the need for ongoing action.

"If we do everything that we can think of — everything that already has been done stays in place, all of the other measures that are being considered put in place — then I think we could reduce the death toll in Ontario to somewhere between 3,000 and 15,000," he said. "Where we end up depends on all of us."

According to the projections, Ontario would have seen 300,000 cases by the end of April had nothing been done. Current measures in place will likely bring that number down to 80,000, and 12,500 with further measures.

Similarly, the number of deaths would have hit 6,000 by month's end with no measures, Donnelly said. Staying the course is projected to reduce death toll to 1,600, and keep it as low as 200 with even tighter restrictions than are now in place.

Donnelly and other officials offered suggestions for such measures. In addition to the steps Ford announced Friday, they included imposing entry restrictions on some communities including First Nations, providing more protection for seniors and tightening guidance on physical distancing.

Donnelly said the projections, which are far from set in stone, span the full course of the outbreak. He said that could last as long as 18 months to two years if second and third waves of the virus are considered.

The estimates were released at the behest of Ford, who initially expressed reluctance to share speculative data in the midst of a fluid situation.

The number of COVID-19 cases and fatalities in Ontario continued their upward trajectory on Friday, though those figures were eclipsed by the surge in cases that are now considered resolved.

The province reported 462 new cases, bringing the total number of infections to 3,255. Deaths climbed by 14 for a total of 67 provincewide.

Those figures did not include four new deaths at a central Ontario nursing home, the scene of one of the largest outbreaks in the country.

Twenty of the roughly 65 residents of Pinecrest Nursing Home in Bobcaygeon, Ont., have died in recent weeks. At least 24 staff members at the facility have also tested positive for COVID-19.

The province has reported numerous outbreaks at long-term care facilities across Ontario.

But the number of resolved cases also surged significantly, climbing more than 30 per cent to 1,023 from 831 on Thursday.

This report by The Canadian Press was first published April 3, 2020.

45 deaths and 356 new cases of COVID-19 reported in Ontario today
Jun 4, 2020 11:33 AM
Comments
We welcome your feedback and encourage you to share your thoughts. We ask that you be respectful of others and their points of view, refrain from personal attacks and stay on topic. To learn about our commenting policies and how we moderate, please read our Community Guidelines.