With the city of Elliot Lake looking to fund its planned multiplex sports facility Marco Mendicino was in town today and outlined the federal government's infrastructure funding plan, which could be of help to the city
0
Jul 4, 2019 7:22 PM By: Kris Svela 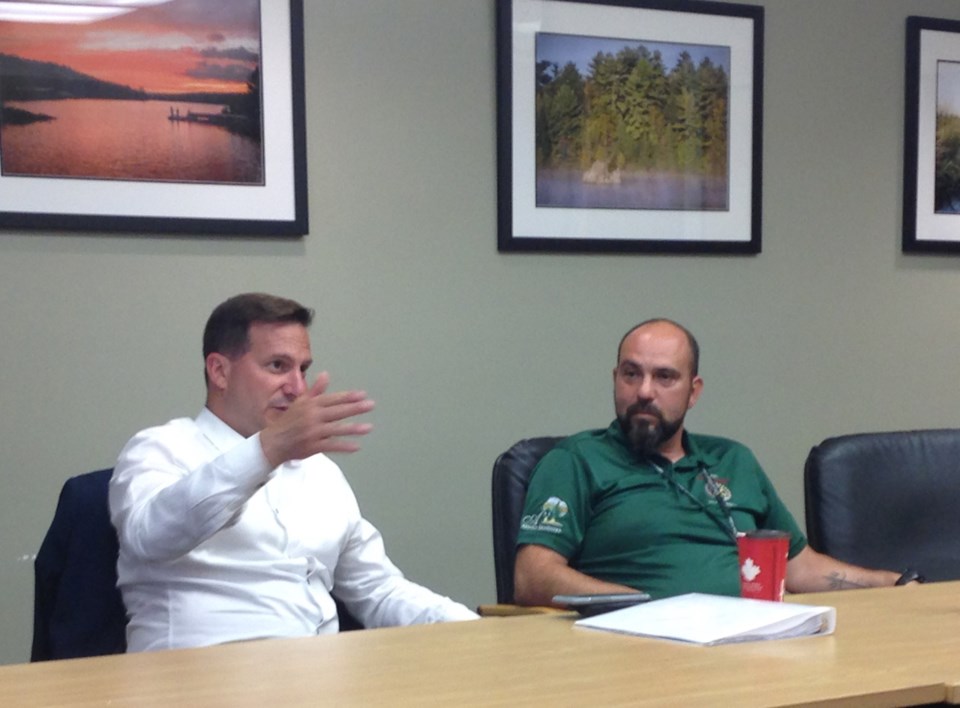 Marco Mendicino, left, the federal parliamentary secretary to the minister of infrastructure and communities joined Elliot Lake mayor Dan Marchisella at a press conference this afternoon. Photo by Kris Svela for ElliotLakeToday

Marco Mendicino, parliamentary secretary to the federal government’s minister of infrastructure and communities, took a swing through Elliot Lake today to speak with senior city staff and council members and see first-hand some of the aging municipal buildings in the city.

Elliot Lake has been looking for funding for its planned multiplex sports facility, known as the hub, to house and replace the aging arena, curling club and swimming pool and provide exercise facilities for seniors. The original cost of the complex is about $40 million. Some $13 million from the province was promised by the former Liberal government and withdrawn by the year-old Conservative government of Doug Ford as part of its cost-cutting measures.

The funding plan would see the municipality apply for funds to fit requirements needed under the infrastructure programs. Elliot Lake would send its proposal to the provincial government for approval with the federal government putting in its portion once that approval is granted.

The stumbling block, according to Mendicino, Elliot Lake mayor Dan Marchisella and several councillors attending the afternoon meeting, is that the provincial government has yet to announce how applications will be made from municipalities. The funding program is expected to be announced in the fall.

“Right now, the big message I’ve heard from mayors across the province is we need Ontario to step up,” Mendicino said.  “We need Ontario, the Premier, to open up those (funding) streams so we can access those historic (investment) dollars We’re using these tours to drive that cooperation.”

“There are huge needs here. This is a huge priority,” NDP Algoma-Manitoulin-Kapuskasing MP Carol Hughes, who attended the tour and press conference said.

Hughes suggested the municipality could send an application to the federal government for its approval in a bid to persuade the provincial government to consider it. That procedure would contravene the normal process for grant applications.

Mendicino said the city should communicate with the provincial government about support given by the federal Liberals through him to “refresh” the province on the needs for grant funding for plans the city has.

Mendicino acknowledged the two people killed in the 2012 mall collapse and the fact no lives were lost in the February rood collapse at the Lester B. Pearson civic centre. The roof collapse forced the permanent closure of the civic centre. It also forced the city to approve spending about $600,000 to rework the roof on the Centennial arena to keep it operating for about two years and to see the structural problems facing the aging swimming pool and curling club.

Mayor Marchisella called the work the city is seeking grant funding for are, “priority infrastructure projects.”

He recalled the difficulties the city went through after the mall collapse and the $20 million the province spent on an 18-month inquiry that had no positive results. The mayor said that money could have been used to find alternatives for mall replacement.

The mayor also pointed out that previous government funding commitments have also been pulled.

Mendicino said after viewing some of the facilities he felt, “you’re on borrowed time here.”

“You have been keeping up your end of the bargain,” Mendicino added, referring to the city making funding applications to meet timelines. “I can only imagine how disappointing it is to have that approval yanked back time and time again because of politics.”

“We need the province to play its proper role in this process,” Mendicino said.

387 new COVID-19 cases confirmed in Ontario, plus 68 unreported
Jun 6, 2020 11:05 AM
Comments
We welcome your feedback and encourage you to share your thoughts. We ask that you be respectful of others and their points of view, refrain from personal attacks and stay on topic. To learn about our commenting policies and how we moderate, please read our Community Guidelines.