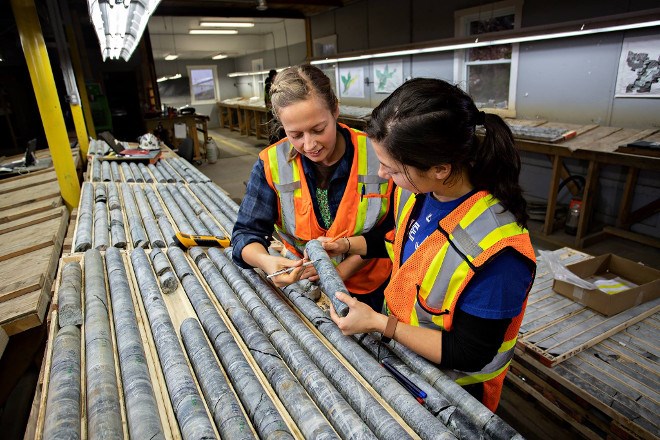 Pure Gold's Madsen Mine project in the Red Lake district is one of a triumvirate of new mines coming online in northwestern Ontario. (Pure Gold Facebook photo)

The road to riches remains a rocky one for junior mining companies.

Financing to do mineral exploration continues to be tight for those on the upstream end of the industry.

While money doesn’t appear to be an issue for larger, more advanced exploration plays, it’s the smaller projects at the grassroots stage that are being neglected, according to Garry Clark, executive director of the Ontario Prospectors Association (OPA) in Thunder Bay.

“If I had a project that could sustain a $5-million exploration project, I could raise it. But I would have difficulty raising something south of $1 million.”

Commodity prices for base metals remain relatively healthy, but investor interest is veering away from the methodical and calculated risk of exploration mining stocks toward the fast buck and quick fix of the legalized marijuana sector.

But those victories are few and far between.

“Partnerships are important to be able to move a project along,” said John Mason, the mining services project manager with the Thunder Bay Community Economic Development Commission.

A certain percentage of companies are raising money through partnerships or boutique banking, instead of the typical equity approach, a trend that began to emerge early last year, he said.

“It’s still a very difficult market. Companies have had to be creative by getting involved with royalty or streaming deals.”

Clark stressed how important it is, for the industry’s health, to have a variety of cashed-up mineral properties in the project pipeline, at all stages of exploration, to gradually feed the major mining companies.

Exploration for base metals, he cautioned, is lagging behind.

“We’re down to having one copper-zinc deposit in Ontario,” alluding to the Kidd Creek Mine in Timmins, scheduled for closure in 2023.

That’s not a promising sign, he said, considering that the metals needed for batteries in the burgeoning global electric vehicle market will eventually lead to a supply crunch for the majors.

It’s prompted a few globally astute investors like Erik Prince, founder of the private security firm Blackwater, to launch a $500-milllion fund to drop into untapped deposits of copper, cobalt and lithium – all metals used in electric vehicle components – in Africa and Asia, with the aim of proving up the resources and spinning them off to the majors.

“People are still looking for high-risk, high-reward projects and they (Australians) seem to have a grasp on the electric vehicle battery components.”

Clark said Australians, who have a keen understanding of the global players and projects, are particularly adept at raising exploration financing. Many operating in Northern Ontario are in the lithium and cobalt spheres.

Clark is familiar with a slate of Australian companies here that have gone largely unnoticed since they’ve issued no press releases.

That trend isn’t lost on Mason.

“We’re hearing that the Northern Ontario marketplace and the availability of projects have put us in a higher pecking order than Western Australia,” a strong mining jurisdiction in its own right, bestowed with iron, gold and other mineral commodities.

One of the more well-known Australian-backed ventures is Lepidico, a lithium development company that was scoping out Sudbury last year to place a chemical processing plant.

The Brisbane-headquartered company signed an off-take agreement with Avalon Advanced Materials in 2017, built around the latter company’s prospective open-pit lithium mine near Kenora.

A great source of interest to both Clark and Mason is Superior Lake Resources' acquisition of the former Winston Lake zinc mine near Schreiber on the north shore of Lake Superior.

The Perth-based outfit purchased a small high-grade mine containing 15 to 17 per cent zinc that might have eight to 10 years of untapped resource.

Dixie is the OPA’s poster child for the super-successful Junior Exploration Assistance Program (JEAP), a rebate program introduced by the previous Wynne government in 2015.

Great Bear used their $100,000 in JEAP funding to jumpstart a drill program that spring-boarded them to a second phase of exploration that produced a high-grade discovery hole.

It enabled them to raise $10 million in financing last year, plus another $3.4 million in flow-through shares.

The JEAP program was funded through the Northern Ontario Heritage Fund and administered through the Ontario Prospectors Association.

Approximately $4.1 million in grant rebates was provided, which assisted in $16.9 million worth of exploration work being carried out.

The grants averaged $67,800 per project and comprised 25 per cent of the money expended to complete the work. Many of the grant recipients reported back to the OPA that they planned to conduct an additional $42 million in follow-up exploration.

Based on that feedback received, Clark said lobbying for the next iteration of JEAP is “definitely” on his agenda.

“We’ve got letters back from just about every company we funded that said without it (JEAP) they would have been in dire need.”

On the advanced projects front, Mason points to three properties leaning toward production over the next three years.

It’s the “year of the permit” for Greenstone Gold’s open-pit Hardrock project at Geraldton, Treasury Metals' open pit and underground mine near Dryden, and Pure Gold’s Madsen Project in the Red Lake district.

All three have environmental assessment studies moving to completion as those miners work through Indigenous relations agreements for various permitting pieces and mine closure plans.

Some relief for the industry also came from Ottawa last November, with a five-year renewal of the Mineral Exploration Tax Credit.

The tax credit is used by junior mining companies to raise exploration funds through flow-through shares.

Since the program’s inception in 2000, the credit has become a bedrock investment attraction piece that’s brought some stability to the junior sector.

But uncertainty is looming on the horizon with new federal environmental assessment (EA) legislation working its way through the Senate.

“How impactful will that be?” wonders Mason. “It’s difficult now to get a project through to the finish line to production. It takes a long time.”

On one hand, Mason said it’s understandable given the trend toward open-pit mining, which creates a larger environmental footprint with bigger mills, larger tailings ponds and waste rock piles, but there remains plenty of trepidation as to what the final legislation might say.

While it won’t affect mine developments currently undergoing EAs, it will impact the next generation of projects over the next five to 10 years.

“Maybe it’s going to be well organized and very clear on how industry should engage, but that’s one of the strong environmental pieces coming at us,” said Mason.

An ongoing challenge at the exploration level remains the duty to consult with First Nations, said Clark.

The Landore Resources case in 2018, where an Ontario Divisional Court revoked an exploration permit based on inadequate consultation, remains a head-scratcher for many in the industry.

The case against the Ministry of Northern Development and Mines has caused many prospectors and juniors to question how the province’s permitting process is carried out and how decisions are made in Queen’s Park on who must be consulted.

Meanwhile, some vast areas of Ontario’s Far North remain off-limits to exploration, either by a government exclusion zone or at the insistence of First Nation communities.

Clark acknowledges that some communities may never understand the socioeconomic benefits of what the industry can bring, but understands that their concerns about potentially adverse environmental impacts from development must be respected.

“We have to continue to work as a cohesive group and try to work together on the potential economic development.”

However, he points to the communities near Goldcorp’s Musselwhite Mine, De Beers' Victor Mine near the James Bay coast and the new Harte Gold Sugar Zone Mine, north of White River, which have all benefitted greatly from these operations.

“Those (success stories) have to be transmitted so everyone understands it.”