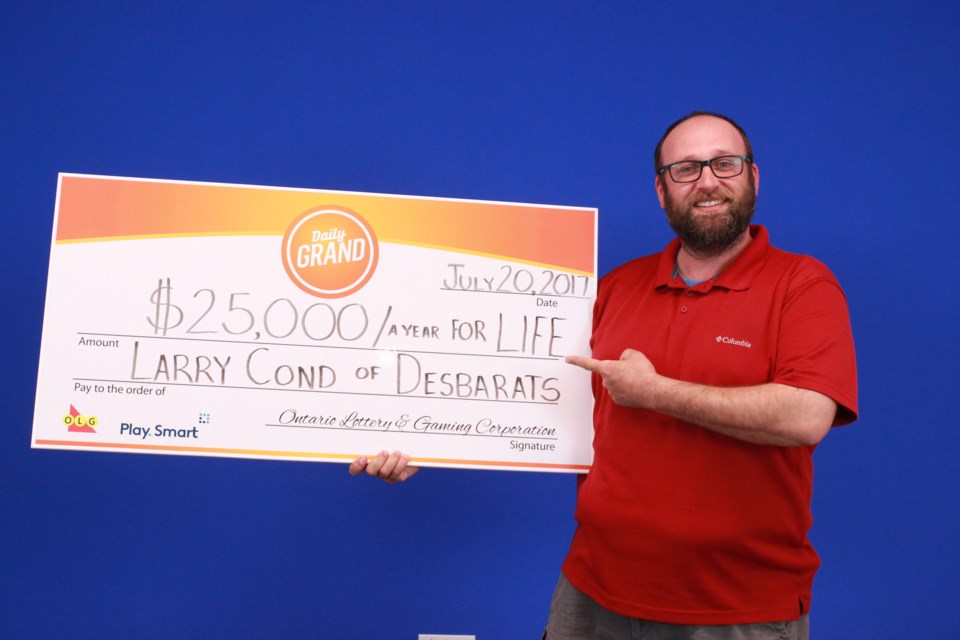 “This was the first Daily Grand ticket I bought,” shared Larry while at the OLG Prize Centre in Toronto where he picked up his winnings. “I’m not even a regular lottery player.”

The 37-year-old was on the road when he stopped for gas. “Out of the blue, I decided to buy a lottery ticket. A few days later, I stopped at a local store and used the ticket checker to check my numbers. Before validating the ticket, I showed it to the retailer who said, ‘I bet it’s the $25,000 a year for life ticket because there was one sold in the Sault Ste. Marie area.’”

Larry called his wife. “I said, ‘You have to get here. I won the lottery!’ She didn’t believe me at first until she saw the validation slip.”

Plans are underway for Larry’s windfall. “It’s a great feeling to know I can pay off the mortgage and begin saving for retirement. I am going to treat myself and my wife to a nice dinner. It still feels surreal,” he concluded.

Daily Grand is Canada’s newest national lottery. At $3 per play, the grand prize is $1,000 a day for life of the winner who matches five main numbers plus the Grand Number. The second prize is $25,000 a year for the life of the winner who matches only the five main numbers. The odds of winning the grand prize are approximately 1 in 13.34 million and the overall odds of winning a prize are approximately 1 in 6.8.

The winning ticket was purchased at D & D Variety on Highway 17 in White River.

116 new COVID cases confirmed in Ontario today
Jul 10, 2020 12:26 PM
Comments
We welcome your feedback and encourage you to share your thoughts. We ask that you be respectful of others and their points of view, refrain from personal attacks and stay on topic. To learn about our commenting policies and how we moderate, please read our Community Guidelines.