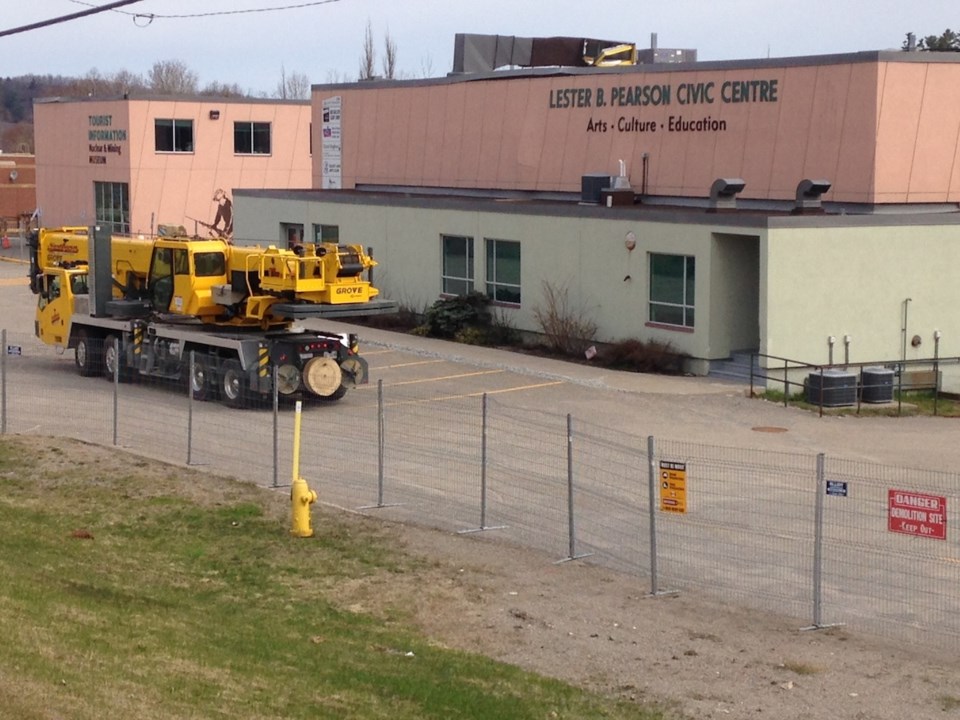 Perhaps Elliot Lake City Coun. Sandy Finamore said it best when she told a joint meeting of the Elliot Lake Arts and Culture Committee and the city's Museum Board, that a new build for a city arts centre is the only way to fly.

"Now we have the golden egg as far as I'm concerned," Finamore said. "I want it at that site (the old Pearson Civic Centre). I want a new building."

"To refurbish a 60-year-old building (Pearson Centre) makes no sense to me. But let's save what (salvageable heritage elements) we can."

She said the parking for the hoped-for new building at the site of the ruined Lester B. Pearson Civic Centre should be located at the front, not at the rear as some spaces are now and where she said people now visiting face, "The bears and the ice."

The committees were meeting together at Elliot Lake City Hall on Thursday afternoon. During that session, Mayor Dan Marchisella said he recently did a walk through in the Pearson Centre where he found plenty of water on the.basement floor. Councillor Finamore said for her, one major health concern in the structure where the roof collapsed last February, is the potential for health-threatening mould in.that environment.

Other committee members suggested a re-build would erode confidence based on the building's compromised safety record and thus hurt attendance.

Elliot Lake City CAO Daniel Gagnon told the joint meeting the city is still negotiating for a settlement with the insurance company, which is so far estimating it will cost $3.7 million to re-build at the Highway 108 site, lost last February when the roof collapsed due to extreme snow and ice accumulation.

Nonetheless, Gagnon estimated an insurance cash settlement would likely be considerably less, in the order of $3.1 million. The insurer has yet to provide a final figure.

So far, one demolition company is willing to take down the old Civic Centre for $400,000, though a demolition RFP has yet to be issued. Gagnon.said regardless of the city's decision, funding from the federal Heritage Ministry could be applied to either a new building or a re-build.

There will be other costs to remediate the Highway 108 site such as accumulated expenses since last winter for security, partial dismantling, site recovery, moving and other expenses. In light of those extra costs, the insurance company sees the actual loss would be more in the order of $5 million. Prior to the collapse, the city had the building insured for $9 million.

In any case, Gagnon foresees no construction scenario - either re-build or new - which would necessitate capital spending prior to the 2021 budget year.  That is the time frame for which the federal Heritage Ministry is now considering funding requests. Mr. Gagnon said the Ministry doesn't care where the local.money it matches for the Arts Building grant program is sourced from, whether from an insurance settlement or other sources.

A number of committee members stressed the importance of locating the Arts Centre on the Highway 108 property due to its visibility, noting that it would make a statement about what Elliot Lake aspires to.

The resolution which passed by majority vote at the joint committee meeting will go to the Arts and Culture Standing Committee, the Museum.Board and, ultimately, to Elliot Lake City Council.

It reads, that the joint committees, "Recommend that the current city arts and culture hub be torn down in favour of a new build to be located at the Highway 108 property."