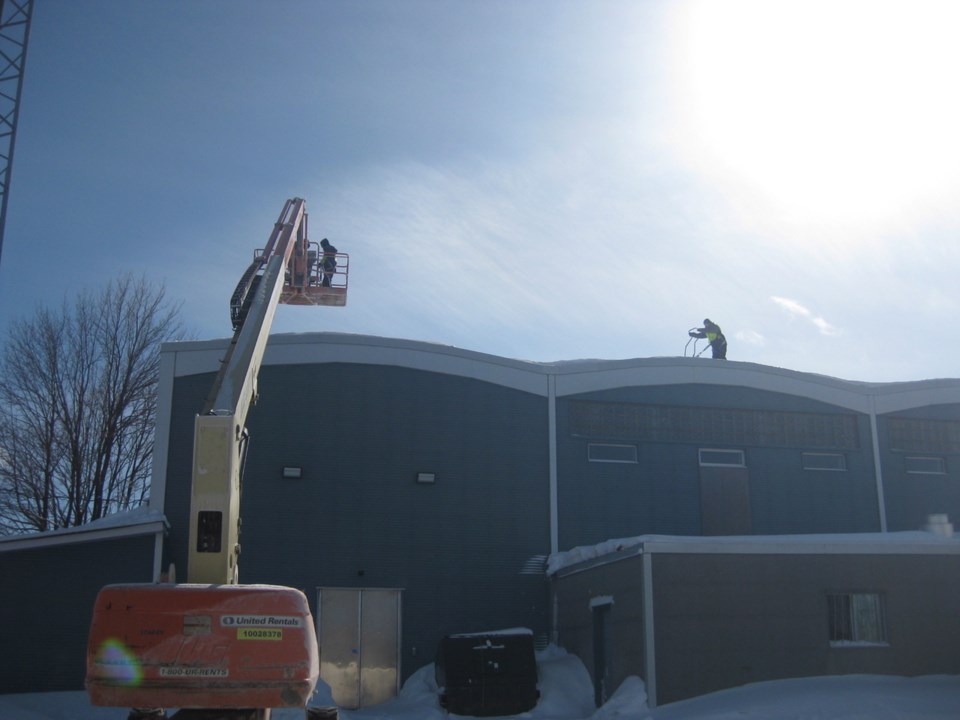 Workers on the roof at Collins Hall, where city recreation department will be located temporarily. Kris Svela for ElliotLakeToday

The future use of Elliot Lake’s Lester B. Pearson remains in limbo, city CAO Dan Gagnon told building tenants at a meeting with the city this morning.

Gagnon said much will depend on the findings of structural engineers once they are allowed in the building to survey damage and the safety of the building. The Ministry of Labour ordered the building closed after a section of the roof caved in last Thursday evening. The collapse destroyed the theatre section.

“Under no circumstances can anyone enter the building,” Gagnon told about 20 people, city staff and tenants, attending the meeting.

“The ministry is most focused on the theatre wing of the building,” he added. “We have some reasonable expectation that someday we’ll be able to get into the other side, but there’s still no idea when.”

“We’re assuming the worst for the state of what’s in there,” he said, adding preliminary assessments are that the “the other side of the building” is structurally sound.

That side houses the art gallery and welcome centre in the lobby of the main floor and city and tenant offices on the second floor as well as studio spaces in the building. Also located in the basement is the mining museum.

Getting a handle on damage could take “weeks, hopefully not months,” tenants were told.

He said removing snow from the section still standing is also essential once the portion is deemed safe.

“The theatre side will have to be demolished,” Gagnon said.

The future of what is existing will depend on the engineering report and insurance claims.

Because of the uncertainty about the future of the building, the city has already temporarily relocated its recreation and cultural departments. The recreation department will be moved to the Collins Hall along with the welcome centre. He indicated theatre productions and shows will use the Collins Hall.

It was expected the Collins Hall will re-open Friday. The city closed the building along with its pool and arena since a week ago until roof snow removal was complete. The pool could be open by early next week with snow removal taking place last at the arena.

Gagnon said possible options for relocation of tenants could be the old Lake Theatre building downtown and another former commercial building owned by the city. There will be no space at the Collins Hall.

He urged tenants to also try and find vacant space they could use.

“We’re here to help you get back on your feet.”

The Elliot Lake Art Club is a major tenant in the civic centre along with driver licence testing, arts and culture group Ariel, and Community Living Algoma.

Gagnon urged all tenants to put together an inventory of what they have in the building and provide it to the city.

At the present time, the art gallery was showing a travelling Northern Ontario Art Association exhibit with some 39 artists which was planned to move to another community last week. It cannot be moved, along with works from local artists available for sale at the gallery.

A spokesperson with Community Living was given assurances that personal client files will be kept confidential whether it is deemed the civic centre would be demolished or safe enough for tenants to go in and remove inventory.

Gagnon said he will keep the media and public appraised about what is happening.

EDITOR'S NOTE: An earlier version of this story quoted CAO Dan Gagnon as saying all the sprinklers were triggered. He has since contacted us to clarify that his initial statement was incorrect.