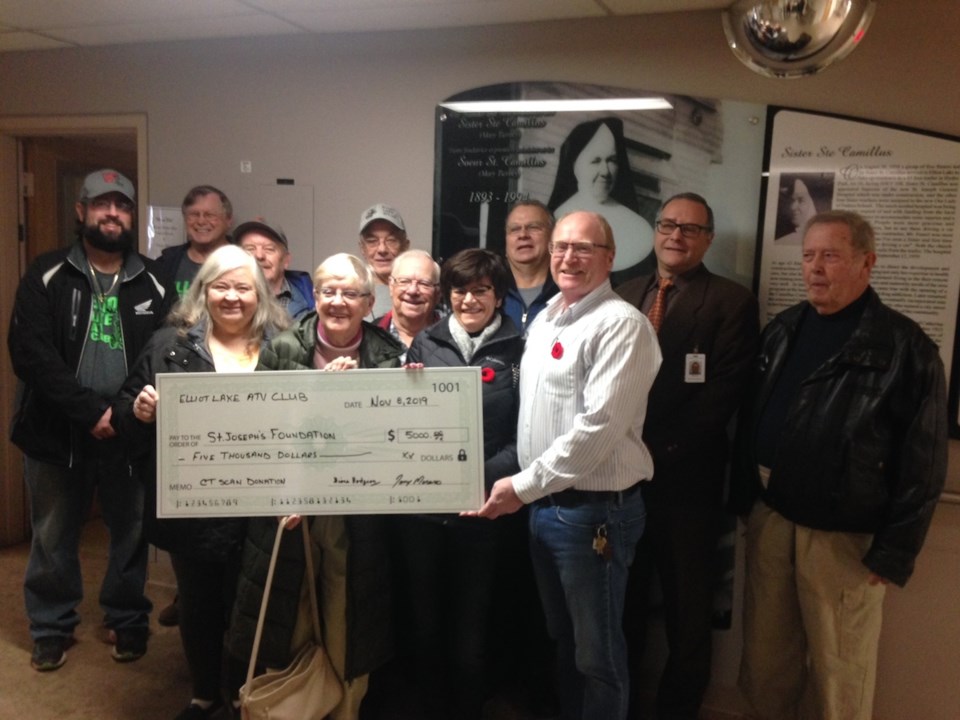 Hospital Foundation Chairman William Elliott and hospital CEO Pierre Ozolins, third and second from right, accept a $5,000 donation from the board of directors of the Elliot Lake ATV club. Kris Svela for ElliotLakeToday

Accepting the donation from the group’s board of directors was Hospital Foundation Board Chairman William Elliott and hospital CEO Pierre Ozolins.

Ozolins said the donation from the club brings the $1.6 million project fundraising target to within $160,000 of reaching its goal.

Money for the donation came from several different fundraisers held by the club which has been in operation for several decades. Fundraisers included the club’s first annual Poker Run, yard sales, a charity barbecue at Soo Mill, club barbecues and coffee club donations.

The club has about 110 members from Elliot Lake and the surrounding area. It takes care of some 350 kms of trail on five different routes together with other outdoor groups and has spent about 950 volunteer hours doing trail maintenance and garbage pick-up.

The ATV Club hosts weekly trail get-togethers on Wednesdays and Saturdays. Its motto is ‘Ride Safe and Be Responsible.’

The club has monthly meetings at its clubhouse at 9 Ski Hill Dr. every second Tuesday at 7 p.m.

“There are also trail passes available for visitors to the area to purchase and ride trails,” a club news release stated. “They are sold at the Dunlop Lake Lodge and City of Elliot Lake tourism.”

Good morning, Elliot Lake!
Jan 24, 2020 6:00 AM
Comments
We welcome your feedback and encourage you to share your thoughts on this story. We ask that you be respectful of others and their points of view, refrain from personal attacks and stay on topic. To learn about our commenting policies and how we moderate, please read our Community Guidelines.