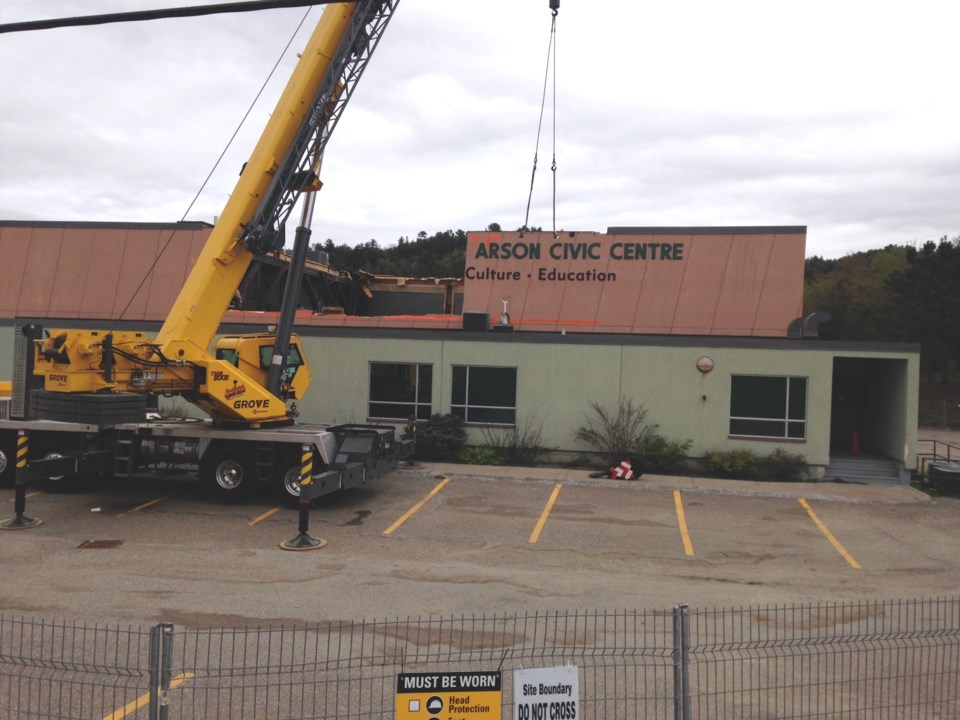 Work continued on the Lester B. Pearson Civic Centre as crews attempt to assess the damage to the building whose roof collapsed in February, 2018. Kris Svela for ElliotLakeToday

In agenda after agenda this spring and summer, former City of Elliot Lake Director of Culture and Recreation Teresa Dunlop produced voluminous reports for City Council, in an effort to chart the future of city's remaining cultural and recreation programs and facilities in the period of COVID-19.

Now, she is no longer employed by the city.

The deed was done in a closed City Council session last Monday night at city hall.

Dunlop had seen the city through the torturous process of relocating and reorganizing her department's operations in the wake of the loss of many of its facilities, including offices, the Miner's Museum, the theatre auditorium, the office of Culture and Recreation Coordinator Kate Matuszewski and Events Coordinator Darla Hennessey, following the demise of the former Lester B. Pearson Civic Centre on Highway 108.

Ms. Matuszewski told ElliotLakeToday she's been on leave from her position since December 2019.

The roof of the building, once a hotel, collapsed under heavy snow and ice load in February 2019. It was soon declared derelict and demolished earlier this year.

As of Friday, when a late-afternoon email revealed there had been major changes at city hall, this is what returned

when one emailed Ms. Dunlop on the city hall system.

"Recently, there were changes in the Recreation and Culture Department at the City of Elliot Lake. Teresa Dunlop is no longer employed with the city. Your email has been automatically redirected but you can also contact Darla Hennessey, Manager of Recreation and Culture at dhennessey@elliotlake.ca or at 705.849.6373"

Elliot Lake CAO Daniel Gagnon issued a news release titled "Changes to Culture and Rec." in which he announced the city had made changes to the Recreation and Culture Department, eliminating the Director's job, noting there are no plans to replace Dunlop in the foreseeable future. The jobs of a recreation programmer and an administrative position were also scrapped.

Gagnon noted, "While these decisions are always difficult, both Council and I felt compelled to act in the best interests of the corporation and the taxpayer. The pandemic’s impact on decreased programs is part of the rationale as well as the need to re-establish department priorities and service levels going forward."

On her LinkedIn page, Dunlop lists her career path beginning with her higher education in Ottawa, serving in other various positions, through several postings in western Canada, and on to her arrival in Elliot Lake in 2017.

Province reports 124 new COVID cases in Ontario today
Aug 1, 2020 10:59 AM
Comments
We welcome your feedback and encourage you to share your thoughts. We ask that you be respectful of others and their points of view, refrain from personal attacks and stay on topic. To learn about our commenting policies and how we moderate, please read our Community Guidelines.