Move necessary to reinforce measures taken by the city, its healthcare and its emergency stakeholder to prevent the spread of COVID-19, says CAO
0
Apr 4, 2020 4:38 PM By: Brent Sleightholm 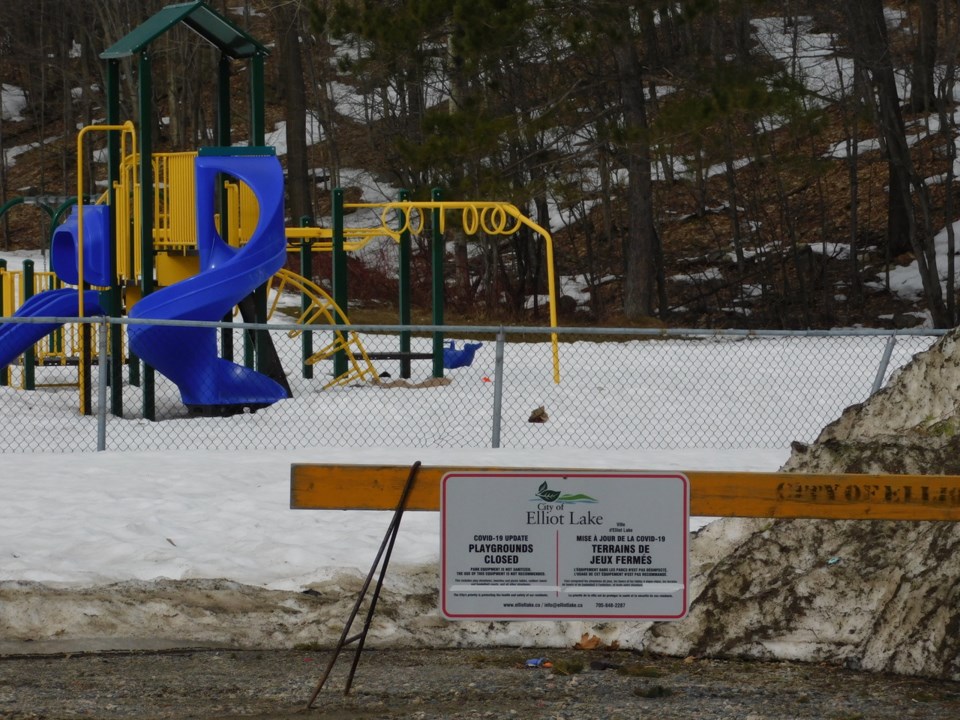 The City of Elliot Lake has closed parks as part of its plan to fight COVID-19. Kris Svela for ElliotLakeToday

Following a closed-door, emergency meeting of Elliot Lake City Council that wasn’t streamed on Saturday afternoon, to which the media was not allowed access, Elliot Lake CAO Daniel Gagnon has issued a clarification.

"We should add “household” to family members. I don’t want the public thinking that family ties mean they can gather between houses. Family is less important to household actually in this context.".

"We had some technical difficulties. Growing pains (during the closed council meeting). Not sure what if any audio/video I can offer from the meeting,” Gagnon said. “I gave council a general update on our pandemic age-friendly programs and pandemic response overall."

"We passed the social distancing bylaw with the power to issue fines that we borrowed from the City of Brampton and Oakville. It was also vetted by an independent lawyer. Bylaw enforcement will be deployed and capacity was recently increased.

"We amended our procedural bylaw to account for council meetings during declared emergencies. Now we can legally have all seven councillors off-site participating and voting in the meeting by video. That includes both open and closed sessions. That is how future meetings will be held. For the delegations and Question Period (QP) we had to adjust given City Hall closed to the public for the foreseeable future."

Gagnon said that delegations are still welcomed via email by 4 p.m. on Friday but they must be for truly time-sensitive issues. The delegation will be by video conference.

Question Period will be for emailed questions by noon on the day of the meeting. The clerk will ensure that the question is raised for the Mayor and Council to deal with at the question period spot on the agenda.

The questions can cover the current agenda or the previous meeting’s agenda.

Council waived the notice provisions of the procedural bylaw to discuss how often to meet and at what committees.

It was decided to suspend meetings of all committees (including Committee of the Whole, Budget and Advisories, etc).

All necessary agenda items will be brought straight to Council at their regular schedule (on the second and fourth Mondays of the month).

Elliot Lake CAO Daniel Gagnon said the declaration was needed to reinforce measures the city and its health care and emergency stakeholders will be taking to continue to prepare and respond to the urgency of the COVID-19 pandemic.

"This is by no means a sign that the municipality has lost control of the situation, but a proactive measure to slow the local spread of COVID-19,” Gagnon said. “It is clear that many in the community continue to disregard public health advice and provincial orders to stay home and only travel for essentials."

"The city and its partners will continue to take measures needed to save lives and decrease the strain on local hospital and the Family Health Team. The health care system simply cannot withstand the swell of sick patients that will result and many will die unless local residents begin to change their behaviour."

In a related move, the city held an emergency Council meeting at 1 p.m. Saturday.

A new social distancing bylaw was passed that includes minimum of fines of $500 to persons and businesses who disregard physical distancing orders by the province. Maximum fines can be $100,000.

Homeowners can be charged for allowing gatherings of more than five non-family members. Fines will result for anyone gathering on public property that have been ordered closed. Businesses must adhere to social distancing orders from the province or can equally be charged.

Residents are cautioned to stay home and only travel for essentials. Only one person per family should be tasked with acquiring essentials.

The city will be sharing more information on how to cope with the pandemic and service level charges at a virtual information session at 7 p.m. Monday night televised on Eastlink Cable 10 and web-streamed live on the city’s website.

Gagnon said timing of the Saturday afternoon meeting was such there was no time to arrange for streaming.

At the meeting were four councillors in person, three via phone and the city clerk, Natalie Bray. The meeting was limited to five people. Media was not allowed to attend.

Ontario reports 383 new COVID-19 cases today
May 28, 2020 10:57 AM
Comments
We welcome your feedback and encourage you to share your thoughts. We ask that you be respectful of others and their points of view, refrain from personal attacks and stay on topic. To learn about our commenting policies and how we moderate, please read our Community Guidelines.