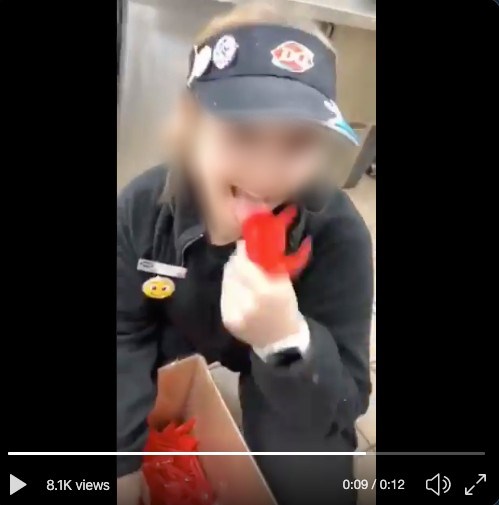 The video racked up over 600,000 views in just a few days after being posted to a viral social media page. Photo: Screengrab

A Niagara Falls fast-food worker is finding herself at the centre of a viral storm amidst the COVID-19 pandemic after a video of her appearing to lick a handful of plastic spoons at her workplace surfaced online.

The video was published on several social media platforms earlier this week, racking up over 640,000 views on a single Toronto-based Instagram page with over 1.5 million followers, that often publishes viewer-submitted videos.

In the video, a female employee at a Niagara Falls Dairy Queen is seen restocking red plastic spoons behind the counter, when the cameraman asks: “Did you even wash your hands?”

The employee looks up at the camera, and appears to take a handful of spoons, licking them and then putting them away, before the video ends in laughter.

Thorold News spoke to the Dairy Queen employee who said the video was filmed in November, and that it was a joke between her and the person filming it, never intended for publication - and definitely not during a worldwide pandemic.

Thorold News is not identifying the woman out of concern for the woman's safety.

According to the employee, her tongue never made contact with the spoons, which the angle of the video doesn’t show.

“I have worked at that store for eight years. If I had made contact with the spoon I would never have served it,” said the woman.

After the video was filmed she said she did not give it any more thought - until messages started coming on Sunday, telling her that the video had ended up online.

Among the thousands of comments expressing outrage over the video are also slurs, insults and threats - some of a sexual nature.

The woman says she received so many personal messages that she had to shut her social media accounts down.

“It’s really nasty threats, not just against me but against my family and my workplace. People have said they are going to kill me, rape me, hoping that I get coronavirus,” she said.

She says the police have advised her to stay inside for her own safety.

Niagara Regional Police said the video does not show anything illegal, but would not comment on whether there is an investigation into the threats.

The employee said she is awaiting security footage from the store to further corroborate that she did not lick the spoons and that the video was taken long before the recent stringent hygiene and health measures came into effect due to the ongoing pandemic.

The woman said she regrets her actions in the video, but said it was just her way of joking around with a friend, and that it was a spur of the moment-impulse.

“I get where people are coming from and I am sorry they think I spread coronavirus, but a lot of people who work in the food industry joke around every day,” she said.

Dairy Queen said in a statement on Twitter that the incident shows ‘concerning’ behaviour, and that the woman is no longer employed with their franchise.

We share your concerns as the video is troubling. Fan safety is our top priority, which is why we discarded all red spoons and the woman in the video is no longer an employee of the independent franchise owner. Thanks for contacting us.

Incidentally, she is not the first person to end up in hot water over footage of licking items in public after the worldwide pandemic struck, that now has killed over 20,000 people worldwide.

This week, a Missouri man was charged after he posted a video appearing to run his tongue along a row of toiletry products in a supermarket, after asking “Who’s afraid of the coronavirus."

He is now facing possible jail time after officials deemed it a suspected attempt of making a terrorism threat.

At least two people have ended up in the public spotlight after licking toilet seats, seemingly as a part of a viral “Coronavirus challenge”.

On Twitter, a video of a man appearing to lick a subway handrail caused more outrage.

All restaurants currently open in the province are operating on a take-out or delivery basis only, after the government decided to ramp up their efforts to flatten the curve of COVID-19.

COVID-19: Trudeau says talks with U.S. ongoing, confident PPE shipments will continue
Apr 6, 2020 12:47 PM
Comments
We welcome your feedback and encourage you to share your thoughts on this story. We ask that you be respectful of others and their points of view, refrain from personal attacks and stay on topic. To learn about our commenting policies and how we moderate, please read our Community Guidelines.