COVID-19: Too many Canadians still going out unnecessarily, PM warns

Justin Trudeau says they're putting health workers at risk, and that threatens everyone who might need medical care
0
Apr 2, 2020 12:24 PM By: Canadian Press 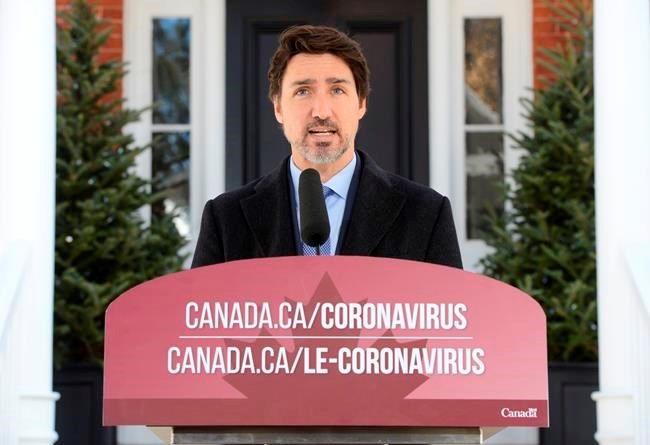 Prime Minister Justin Trudeau said too many Canadians were still going on needless outings, potentially encouraging the spread of the coronavirus. Those who do, Trudeau said, were putting health workers at risk, threatening everyone who might need medical care.

The virus has now infected more than 10,000 Canadians and cost 127 their lives. Ontario on Thursday reported 16 more deaths, while a hard-hit nursing home in Bobcaygeon reported two new fatalities.

Experts say keeping a physical distance from others, along with frequent hand washing, is the most effective way of easing pressure on an increasingly stressed health-care system, a message Trudeau underlined.

At the same time, the prime minister said he was leaning on restrictions provinces have been putting in place rather than issuing a national stay-at-home order.

"We're not quite yet at that point," Trudeau said.

Several provinces, Quebec and Nova Scotia among them, have been patrolling provincial borders in an effort to stop or discourage unnecessary incoming travel. Governments have shut non-essential businesses and closed many public facilities such as parks, beaches and playgrounds. They've also warned of further restrictions to come.

In Toronto, Mayor John Tory was to meet with the chief of police and city staff to discuss increased enforcement of social distancing — ensuring people avoid gatherings and stay at least two metres away from others. Police have issued 14 tickets so far for non-compliance related to using parks and social gatherings of more than five people, a spokeswoman said. Other jurisdictions have similarly arrested or fined quarantine scofflaws.

With more than a million Canadians already reported as having applied for jobless benefits, the Liberal government was expected to outline how it will help them weather the crisis — an effort expected ultimately to top more than $250 billion. Almost half would go to direct financial aid for workers and businesses.

The restaurant sector has been particularly hard hit. A survey by the not-for-profit Restaurants Canada, which speaks for the industry, estimates about 800,000 jobs have been lost as a result of the pandemic. Almost one in 10 restaurants have already closed and nearly one in five expects to close if conditions don't improve in a month.

The government was planning to recall Parliament to authorize its massive relief spending — a move the Bloc Quebecois said would only cause more delays in getting cash into needy pockets.

Just how much money the government plans to inject into the economy to mitigate the devastation was the subject of several reports from Parliament's spending watchdog on Thursday. Just three federal measures — aimed at helping low-income earners, families and seniors — will cost more than $8 billion, budget officer Yves Giroux said.

However, an analysis from the left-leaning Canadian Centre for Policy Alternatives estimated 862,000 unemployed workers —about one-third of the total — aren't eligible for aid.

"We're looking at ways to help everyone in Canada that needs it," Trudeau said. "We know there are many vulnerable people."

Federal New Democrats have been pushing the government to provide relief for Canadians who can't afford to pay their rent, while the Bloc wants promised wage-subsidy relief to flow more quickly than the six weeks the Liberal government has said it will take.

On Monday, the Canada Revenue Agency is set to begin delivering the federal benefits meant to mitigate the catastrophic effects of epidemic. The agency normally has between 3,000 and 4,000 employees working the phones at call centres across the country for tax season, but more than 1,000 have volunteered to bolster those numbers.

As many as 300,000 Canadians are expected to inquire about the government's $2,000-a-month Canada Emergency Response Benefit each day and agency employees, in line with millions of others, will be taking calls from home.

The Opposition Conservatives are urging the government to scrap a 50 per cent hike in the carbon tax that took effect on Wednesday and refund GST payments made over the past six months.