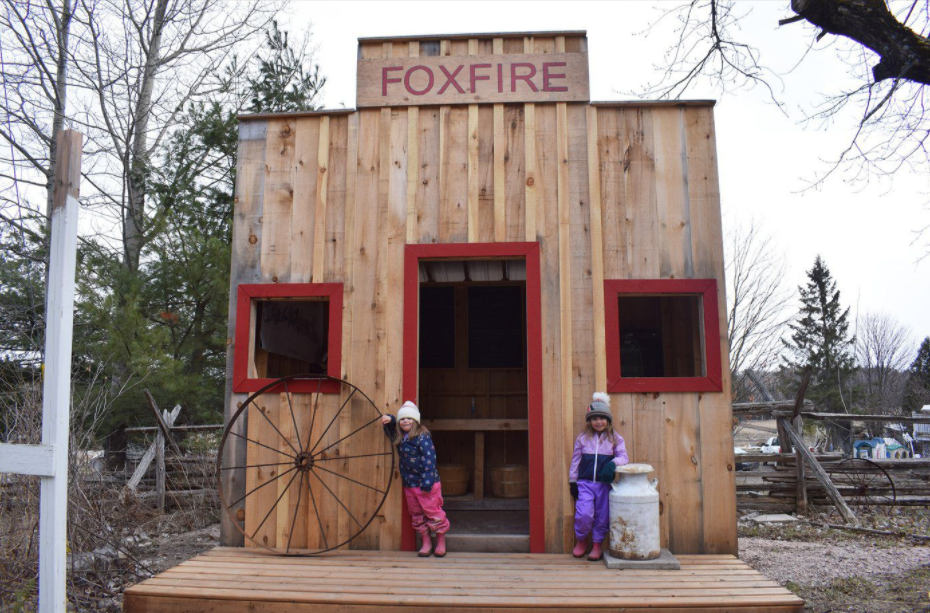 Lewington is the owner of Click Fork Northeastern Online Farmers' Market, a collaborative of farmers in West Nipissing selling their products online for delivery.

“For our farm, the issue we have is meeting the demand,” she says. “We're having a supply-and-demand issue now because of this unprecedented time. All of a sudden there's a lot of interest in local food and I would say our volume of orders has tripled since COVID-19 hit.”

Mattimus Larivee and Daneille Seguin, owners of Foxfire Heritage Farm in Powassan, frequently sold their goods at farmers' markets in the past. But they have since turned to social media such as Farm to Table North Ontario, a Facebook group created to help farmers increase community awareness of their products.

Larivee says the online community has been a huge supporter.

“I post a lot on our Facebook page and I’ll push our stuff on the North Bay buy-and-sell pages. Powassan also has a very strong online community. So there's a lot of good ways to get the message out.”

Larivee says this is their first year opening a roadside stand to sell via self-service.

“You’re the only one in the stand,” he says, “so it kind of takes the social distancing element and honor system into account.”

Larivee says response has been great.

“We've sold out of bacon and right now we have no eggs,” adds Seguin, who says it helps being on a main road. “I think the roadside stand will pick up a lot of that slack that we would normally be able to sell to farmers’ markets.”

Seguin believes there are several factors behind the positive response from customers.

“I guess they're afraid of food scarcity,” she speculates. “You also possibly don't want to go to the supermarket. And there's a big movement supporting local, trying to get from local farmers.”

The North Bay Farmers' Market announced earlier this month that it will operate this spring and summer.

However, to reduce traffic during the COVID-19 pandemic, the market said buyers will only be permitted to pick up items purchased online.

The market opens May 16 and runs through to Thanksgiving weekend. It's indoor winter season was cut short due to COVID-19.

In Thunder Bay, for example, Kenkel says an indoor farmers' market was able to reopen with social-distancing protocols.

“It's no different than going into a grocery store environment because they are an indoor facility.”

While small-scale farmers relied in the past on farmers’ markets for sales, Kenkel says that business is moving online and to roadside stands because of COVID-19 concerns.

Some farmers, he says, are running out of supply trying to keep up with demand.

“Everybody panics at one end and it affects the supply chain right through,” he says. “Hopefully, these people will get enough products in and the farmers they bought from them have enough on hand until they have the supply refurbished.”

Roy Warriner sells his dry bean soup products from his farm, Warriner Family Farm, in Trout Creek. He says he’s been selling his products through mail delivery in addition to selling through feed and market stores during the COVID-19 outbreak.

While he’s making less than half of his income from the previous year, Warriner says he’s not worried about surviving and bouncing back.

Warriner says he doesn’t qualify for employment insurance or the Canadian Emergency Response Benefit (CERB) as he’s selling more than $1,000 a month. But, he says, income doesn’t necessarily mean profit as he still has expenses to pay.

But, he concedes, the circumstances are different for many younger farmers.

“If I was 25 or 30 years old and I was trying to get my business established, this would be a disaster.”

Warriner says he also has received support from the community during COVID-19. He says he had one customer who wanted to order almost 100 packages of his soup mix to support his business.

“I called him up and I said, ‘What are you going to do with four cases? Did you realize how much four cases of beans make; each one makes a Dutch oven.' This fella says 'We are able and capable, and we're just helping businesses by buying stuff from them on the internet to keep them going,'” Warriner says.

Larivee says Foxfire hasn't had to apply for financial assistance because of the success of their roadside stand. In addition to a high demand of products, Seguin says they also have people asking for livestock.

“Because of this COVID, I guess they're worried about their food supply and want to raise and grow as much as they can to create their own food,” Seguin guesses. She’s sold out of fertile eggs for the year.

Larivee adds it’s also something to do.

“I was quite surprised with the amount of people who have stopped in in the past week and exceeded my expectation,” he says. “So, needless to say, I haven't been advertising because we’re booked up.”

Liz Dobinson of Whispering Pines Farm and Garden in Sundridge has reduced her sale of meats to the public by only allowing the public to pick up individual cuts from the farm if they call ahead.

Dobinson says only 10 per cent of their income comes from individual shoppers. She says her contracts with existing clients haven’t been affected by COVID-19, but she's losing out in attracting new customers.

“We’re running as long as our abattoirs continue to run. But if someone gets COVID-19, then they will also shut down.”

Due to her father’s health and for her family’s safety, Dobinson says she takes precautions by wearing masks and gloves when she leaves the house, as well as with her clients who come for their monthly pickups.

“We’re spacing everybody that comes out... We’re giving them half an hour to come and we distance ourselves from them. We have everything bagged for them; we ask them to wash their hands, pick up and then wash their hands again when they go to leave,” she explains.

Dobinson emphasizes the need for community support of local farms during COVID-19.

Click Fork's Lewington believes more people are purchasing products from local businesses because of COVID-19 and shortages at grocery stores, as well as supporting local business.

“I've seen lots of comments from people saying how they had no idea that there was so much products available right here in northeastern Ontario.”

WORLD: Canada might not compete at international figure skating championships - if they happen
Nov 27, 2020 10:20 AM

CANADA: Ice-dancers Moir and Virtue among 114 Order of Canada inductees
Nov 27, 2020 10:13 AM
Comments
We welcome your feedback and encourage you to share your thoughts. We ask that you be respectful of others and their points of view, refrain from personal attacks and stay on topic. To learn about our commenting policies and how we moderate, please read our Community Guidelines.

About the Author: Mackenzie Casalino

Mackenzie Casalino is a Local Journalism Initiative reporter who works out of the North Bay Nugget. The LJI is funded by the government of Canada
Read more