The company says there would be "significant humanitarian implications" to doing so
0
Apr 3, 2020 2:20 PM By: Canadian Press 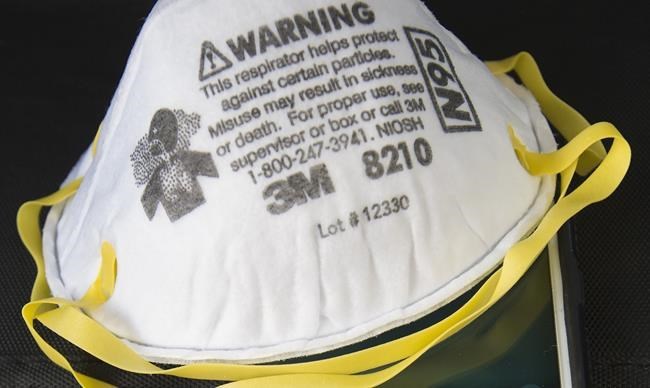 WASHINGTON — One of the world's largest U.S.-based makers of consumer products says it has been told by the White House to stop exporting medical-grade face masks to the Canadian market.

Minnesota-based 3M says the Trump administration has asked that it stop sending N95 respirators to export markets in Canada and Latin America.

But the company, which calls itself a critical supplier of the masks to both markets, says there would be "significant humanitarian implications" to doing so.

"In addition, ceasing all export of respirators produced in the United States would likely cause other countries to retaliate and do the same, as some have already done," 3M said in a statement Friday.

"If that were to occur, the net number of respirators being made available to the United States would actually decrease. That is the opposite of what we and the administration, on behalf of the American people, both seek."

The company was singled out for criticism Thursday by President Donald Trump, who has invoked the U.S.'s Defense Production Act to compel 3M to prioritize orders from the Federal Emergency Management Agency for masks to help meet soaring American demand.

Demand for so-called personal protective equipment — gloves, gowns, face shields and the all-important N95 masks — has been soaring around the world as overtaxed doctors, nurses and hospitals struggle to manage the spike in COVID-19 cases while protecting themselves from infection.

And now that the Centers for Disease Control and others in the health community have started recommending everyone wear some sort of face covering while out in public, the scarcity of medical-grade masks is sure to get even worse.

"Over the last several days, we had some issues making sure that all of the production that 3M does around the world, enough of it is coming back here to the right places," White House trade adviser Peter Navarro said Thursday.

"So what's going to happen, the signing of that order in 'Trump time,' is we're going to resolve that issue with 3M probably by tomorrow close of business because we can't afford to lose days or hours, even minutes in this crisis."

3M says it has already "gone above and beyond" to maximize production of the masks for the U.S. market, and was doing so long before the Defense Production Act was invoked.

"We appreciate the authorities in the DPA that provide a framework for us to expand even further the work we are doing in response to the global pandemic crisis," the company said.

"We will continue to maximize the amount of respirators we can produce on behalf of U.S. health care workers, as we have every single day since this crisis began."

This report by The Canadian Press was first published April 3, 2020.