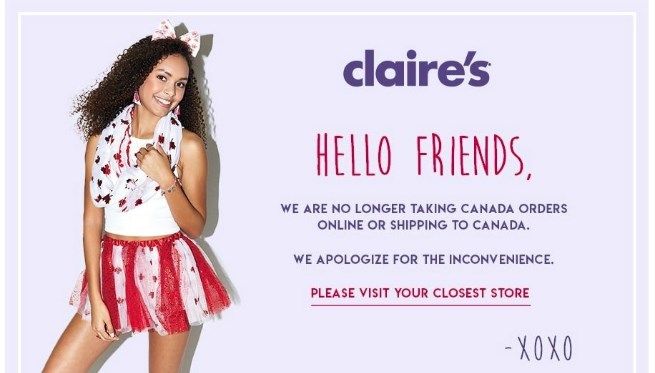 Popular cosmetics maker Claire's has pulled some of its products from the shelves in Canada after reports emerged that they contained asbestos. (Supplied)

Popular cosmetics maker Claire's has pulled some of its products from the shelves in Canada after reports emerged that they contained asbestos.

In an email, Health Canada said it's against Canadian law to sell products that “may cause injury to the health of the user.

“Health Canada is aware of the reports of asbestos found in various cosmetic products supplied by Claire’s,” the email said. “Health Canada contacted Claire's, which has confirmed that the same cosmetics were sold in Canada. As a result, Health Canada has requested testing data from the company to demonstrate compliance of cosmetics sold in Canada?. In the interim, Claire’s instructed their retail stores in Canada to remove the affected cosmetics on Dec. 22, 2017.”

Reports of asbestos in Claire's cosmetics emerged Dec. 22 when a Providence, Rhode Island, TV station, reported that a mother discovered problems with her six-year-old daughter's makeup.

She sent the products for testing at an independent lab in North Carolina.

“Test results revealed tremolite asbestos, which is a toxic, cancer-causing material,” said the story by NBC10 News in Providence.

The woman then purchased Claire's products from nine other U.S. states, and they also tested positive for asbestos. As a result, Claire's has pulled the following products:

In a post on their website, Claire's says that it has pulled the products while an independent laboratory they hired conducts further testing.

“In the interim, we have stopped sales of the products and are issuing full refunds to concerned customers,” the post said. “As always, the safety of our customers and products is our top priority.”

“Health Canada will continue to monitor the stop sale of these products to verify that they remain off the market,” the email from Health Canada said. “Additional actions may be taken if the results of testing demonstrate a risk to health and safety.”