Abandoned on a Toronto streetcar and adopted as a baby, Bradford West Gwillimbury resident Liz Pegg shares her story about finding an extended family
May 12, 2019 1:30 PM By: Miriam King 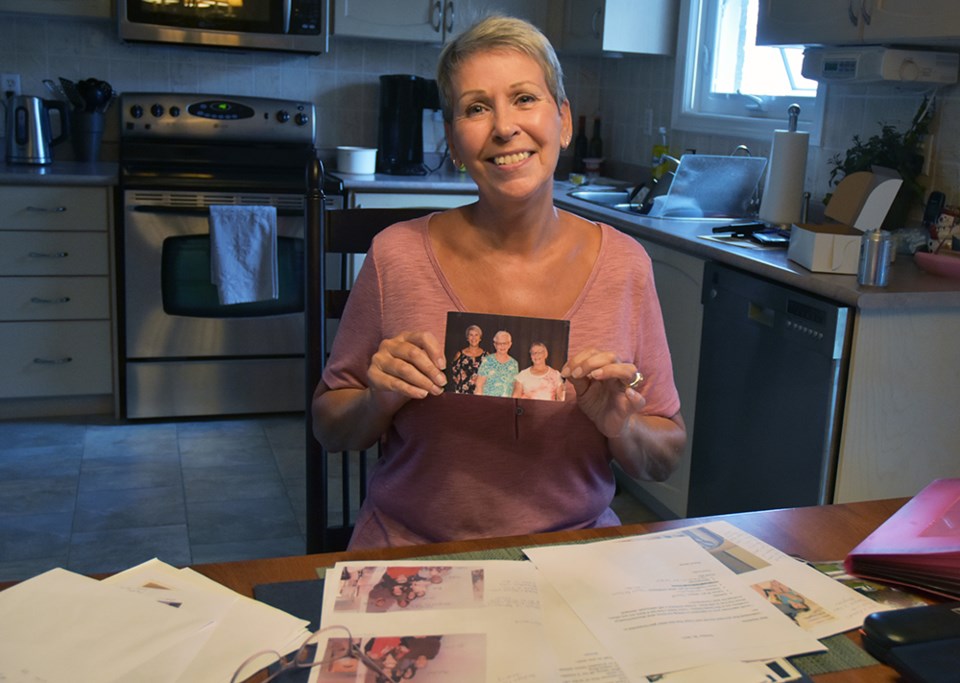 Liz Pegg sits in her Bradford kitchen, holding a photo of herself and the two half-sisters she has discovered. Miriam King/Bradford Today

It made the Toronto newspapers, back in 1950.

A passenger, moving to the back of the Spadina Avenue trolley bus, discovered a small “pink bundle” on the back seat. He ran to get the driver.

They found a baby girl, dressed in “a white flannelette night gown with pink embroidery and wrapped in a pink-and-white checked flannel blanket,” lying on the seat.

Driver and passenger went to find a police officer. Const. Watson Earl Cook, just 24 and relatively new to the beat, picked up the child and took her to the Claremont Street police station, where the baby spent the day while officers investigated and the Children’s Aid Society was called in.

Police concluded someone had carried the baby on board, perhaps hidden in a bag, placed the child on the back seat and then simply got off the bus. The baby girl was healthy, and had been well cared for. Doctors estimated she was about 10 days old. There was no other information; the mother was never found.

The baby was given the name “Jennifer Cook,” the officer’s own last name, and handed over to Children’s Aid. At the age of eight months, she was adopted by a loving family.

Fast forward 40 years. Liz Pegg always knew she was adopted, into what she called “an absolutely fabulous family. My mom and dad were my Mom and Dad.” She also had an adopted brother.

Then there was the medical side. Without knowing her family history and background, her own medical file was shrouded in mystery. Was there a propensity for heart disease? A family history of diabetes?

“I needed to know more,” she said.

It was just at the time that Children’s Aid was starting to open up their adoption records. All the same, Pegg said, she wouldn’t have gone looking for her birth parents if her adoptive parents had still been alive.

“I wouldn’t have started this,” she said flatly; it would have seemed disloyal, and might have been upsetting to her mother and father.

Pegg, married and with children of her own, finally approached Children’s Aid for information. That’s when she discovered that she was the baby in the newspaper articles. That she wasn’t simply adopted, but had been abandoned.

There were no birth records, no actual birth date - nothing. The social workers gave her a reprint of the newspaper article from 1950 and told her, “For you to find somebody at this time is impossible. There’s nothing to go on.”

“My first instinct was, I was angry,” Pegg said – especially at her birth mother, for abandoning her.

“Then I thought, 'She was desperate,'” Pegg said. And remembering that the article had said the baby was well-fed, well cared for, healthy and dressed in new clothes, she realized, “Somebody cared.”

But there was no way to go any further. It was a dead end. “I did leave a letter,” Pegg said, addressed to her birth mother – just in case – but never heard anything further.

Move ahead another couple of decades. It’s 2017. Times have changed. Not only are there computers, Internet resources and databases, there is DNA testing.

“For Mother’s Day, Jennifer (Pegg’s daughter) got me a DNA testing kit, from AncestryDNA,” Pegg said. “We spat in our tubes and off it went.”

A while later, Jennifer contacted Ancestry, “and they said, ‘You have a hit.’ At that point, my world stopped dead,” Pegg said. “It’s complete disbelief at first.”

Looking at the name that came up, and the percentage of matching DNA, it was obvious Pegg had found a cousin. A first cousin.

Then the realization - the new cousin’s mother, “if it’s not your mother, it’s got to be your aunt.”

Pegg was so excited, she immediately contacted her new family member, spilling out the story – “the whole story” – of her abandonment and adoption, the dates, the places.

What followed was like uncovering the clues in a mystery novel.

Pegg learned that her cousin Brenda’s mom was one of eight sisters, who had gone their separate ways. Her birth mother was narrowed down to one of two sisters, but which one was still a mystery. Then, within days, Pegg was contacted by another relative.

Sharon Virtue, chair of the Aurora-Newmarket Parent Finders and an adoptee, had already identified two other siblings – a brother and an older sister – when Pegg’s link came up on Ancestry.

Now they realized that there were in fact four children. “Three of us were given up to Children’s Aid in various cities. I’m the one that was abandoned,” Pegg said.

And Sharon’s DNA test had confirmed the identity of their mother: “Anastasia,” who also used the names of Stacey and Nettie.

Pegg’s half-brother Richard passed away in 2009, but she has met both half-sisters, Sharon and Carol, and discovered incredible parallels – especially with Carol, with whom she shares more DNA.

As for Sharon, who lives just 10 minutes away from Pegg’s Bradford home, they may have crossed paths numerous times without knowing it. “She’s a mall walker. I’m at the mall all the time.”

And, Pegg said, “all three of us are stubborn as the day is long.”

The discoveries came too late for Pegg to connect with her birth mom, who passed away in 2014 - and all indications are that “Anastasia” would not have wanted a reunion, or welcomed the contact – but she has now met her sisters, nieces and nephews, and last year flew to Winnipeg to meet her 94-year old Aunt Tina.

“It’s a massive family,” she said. “They are amazing. Truly amazing.”

She never expected to be part of an extended family. “This is surreal. I have nieces and nephews – I'm in my late 60s, and I never had this before,” Pegg said.

“I didn’t do this, truthfully, other than to get a little bit of information," she said - but now "I have a family, and that’s the beautiful part of this whole thing.”

There’s a sidebar. Pegg had for years hoped to find Const. Watson Earl Cook – the officer who brought her to the Claremont police station. “I wanted to thank him,” she said. “As an abandoned child with no name, no birth date, no family – he gave me his last name, Cook.”

It was Sharon who finally traced Cook to Mississauga, using phone books and voter records, in just two days. Unfortunately, he had passed away in 2001, but Pegg wrote to a “daughter” and told her, “If this was your father, he was my hero.”

The woman turned out to be the daughter-in-law, and told Pegg, “My father-in-law would have loved to have met you.” Her mother-in-law kept the same newspaper clipping in a keepsake box and always wondered what happened to the baby.

It was a moving moment. “It was also closure to me, because I got to say, 'Thank you, thank you for giving me a name,'” Pegg said.

With Mother’s Day coming up, Pegg has shared her story. “What I’m hoping out of all of this is people will do it,” she said: get the AncestryDNA kit and start a personal journey of discovery. “Does it work? Yup, it does.”

As an adoptee, she said, “You’ll meet people who say, ‘I met someone who looks just like you. Are they related?’ And you say, I don’t know. I was adopted. I don’t know.”

She admitted “it’s a rollercoaster ride,” with its ups and downs – not everyone wants to make connections, or unlock secrets of the past. “But my puzzle fits. I’m no longer missing corners.”

There is one piece still missing, and that’s her father. Ancestry DNA turned up a distant link, but so far there’s been no connection and may never be, and Pegg doesn’t worry.

“I’m a firm believer that everything happens for a reason,” she said. “I am just so, so fortunate to have had this happen.”

Pegg admits that initially she struggled with feelings of guilt and betrayal. Was her search a betrayal of her adoptive parents? Now, she said, “Knowing my mom, she would be thrilled that I am not alone.”

CANADA: More than half of Canadians polled say they have experienced a cybercrime
Jul 11, 2020 5:20 PM

CANADA: DavidsTea closing 82 stores across the country
Jul 10, 2020 8:40 AM
Comments
We welcome your feedback and encourage you to share your thoughts. We ask that you be respectful of others and their points of view, refrain from personal attacks and stay on topic. To learn about our commenting policies and how we moderate, please read our Community Guidelines.

About the Author: Miriam King

Miriam King is a journalist and photographer with Bradford Today, covering news and events in Bradford West Gwillimbury and Innisfil.
Read more